How 'Feel It Still' Became the Song You're Hearing Everywhere

The indie rock band Portugal. The Man spent three years laboring over an album with some of the world’s top producers in the world’s best studios. Then they threw all that away.

Instead, in the span of 45 minutes, lead singer John Gourley cobbled together “Feel It Still” on a whim. That track has become a platinum-certified alt-rock mega-hit, reaching number one on Top 40 radio, peaking at #4 on the Billboard Hot 100 and nabbing a title as most-Shazamed song in the country for seven weeks running. The smash success of the single is nothing if not a surprise for the low-key Gourley, a high-school-dropout Alaskan who got into music because playing gigs “paid for gas.”

But after seven albums together by 2014, Portugal. The Man — which consists of Gourley (guitar and vocals), Zach Carothers (bass and vocals), Kyle O’Quin (keys and vocals), Jason Sechrist (drums) and Eric Howk (guitar) — were paying for much more than just gas. And that’s when it fell apart, according to Gourley. “It’s hard to finish a record when you’re living the rockstar dream,” Gourley laughs.

It took a visit back to his dad in rural Alaska before they realized they needed to set aside the glamour and go back to their roots: finding joy in classic Oldies riffs, as “Feel It Still” does by sampling the Marvelettes’ “Mr. Postman” from 1961. “You don’t need to be the best musician in the world, you just need to be capturing songs,” Gourley notes.

TIME talked to Gourley about the roots of his musical ambition, why it’s OK to “steal” from the best and the serendipitous creation of “Feel It Still.”

TIME: You had an unusual childhood. How did the way you were raised impact your music later in life?

GOURLEY: I grew up moving around quite a bit. When I was five years old we lived in a place called Icy Lake that was, literally, just a frozen lake. We had to mush dogs to get out of the cabin to the edge of the road, where we parked the truck. The thing that I remember more than anything is, on our two hour drives to get groceries, we’d listen to Oldies Radio. I think that’s where my love of music came from. Also, my dad actually went to Woodstock. He came to Alaska straight after that, and lived off the land for three years. So everything that my dad brought with him was pre-1970, and all the records were from that era: the Beatles, Hendrix.

So when did you first start getting into music?

I never played a lot growing up, because everything I listened to was so 60s era. And nobody’s going to beat the Beatles. The greatest music had already been written. Everything that I saw was just so — untouchable. It was actually hearing Oasis — “Champagne Supernova” on the radio on the way to hockey up in Denali — hearing a band who borrowed all these influences made me realize you could be a band today: just steal from the Beatles!

How did the band come together?

I was coming down to visit Zach in Portland. (Zach, Eric and I all grew up together.) I remember going to these shows for $3, punk bands playing for 20 people. It was strange how the experience of seeing bands play for no money and no people made me want to play music. It was realizing that you can play music for gas money, so you can travel and see the world. When we started, we bought a mini van, a rice cooker and a five-pound bag of rice. Before doing this, I never pictured myself playing in New York City. I never thought I’d go to Europe, and definitely not Africa. And that might be a part of our drive and our work ethic: we all come from working class backgrounds, and it’s all about hard work. I never saw my dad take a day off.

Let’s fast forward to this latest album, Woodstock. There was a three-year gap between your seventh album Evil Friends and this one. What happened?

We went into the studio with two of the best producers in the world, Danger Mouse and Mike D from Beastie Boys. One of the most inspiring things I’ve ever seen was walking into the Beastie Boys studio in Brooklyn and seeing the gear: a mismatched drum set in a corner, guitars with broken strings. It looks like your mom’s garage or basement. It’s not about having the state-of-the-art studio with the best gear. You don’t need the 1960s Gibson to make it happen. You just need an instrument. Anything that can make a sound. That ultimately led me to throwing out the record.

We were out in Malibu recording at Shangri La, and we’re getting up every morning, drinking smoothies, living off the beach. But it’s hard to finish a record when you’re living the rock star dream. It’s really hard to wrap it up if every day you’re getting up, and you have everything you’ve ever dreamed of. We happened to [be there] between Kanye [West] sessions. That whole thing was just too much for me.

So it sounds like you needed to strip it back to the roots.

Yeah. It was a talk with my dad that actually brought us back down to earth. We’re three years into this album, and we have 60 songs, ten versions of everything. Zach and I are hanging out with my dad in Alaska, having a beer. And he says, “Hey guys, what’s taking so long? Don’t you just pick up some instruments and go into a studio and record the songs?” And we looked at each other like, “What an a–hole. Did you think our job was that easy?” But he was looking at it from the angle of a carpenter. You have a bag of tools, and you’re going to build a house. It’s that simple. And you know what? It is that simple. That’s all the Beatles and the Rolling Stones and Pink Floyd were doing. They were going in and recording a bunch of songs every six months.

So what’s the story of “Feel It Still?” And how do you feel about it now?

“Feel It Still” was not even a song we were working on that day. We were working on mixing “Live in the Moment” in one room at the studio, and I needed to take a break and give my ears a rest. So I stepped into this side room, and I just started playing that bass line. And luckily Asa [Taccone] from Electric Guest was in that room working on something else. It’s a weird thing for other artists to be in the studio with you. But I’m so happy he was there. He heard that bass line, and he just took his headphones off and said to me, “Yo J, can I record that real quick?” I was caught off guard, so I said “Yeah, sure, let’s see what you got.” And he handed me a microphone and said “Hey man, do you have any lyrics?” I had this “rebel just for kicks” line in my head for a while… I was trying to think of a bridge and [Taccone] picked up the mic and was in my face and started saying, “Is it coming… is it coming…” and that’s where it came from: it was just Asa in my face trying to get me to write a bridge. The whole thing was just 45 minutes at the end of the day.

And the “Please Mr. Postman” melody [by the Marvelettes]?

“Mr. Postman” just popped into my head; it’s one of my favorite songs of all time. So I threw it in as a placeholder. Almost immediately I realized it was the melody for the song; there was no way I could change it. It reminded me so much of where music comes from for me. It’s the reason we play music and the reason we go on tour: like Pete Seeger or Woody Guthrie taking their folk songs across the country, having an experience in Missoula, and taking that experience to Idaho Falls and writing a new verse along the way. It’s all storytelling, and it’s all about sharing things with a generation or culture who haven’t heard that song before. I love the idea of a kid hearing “Mr. Postman” for the first time because they know “Feel It Still.” 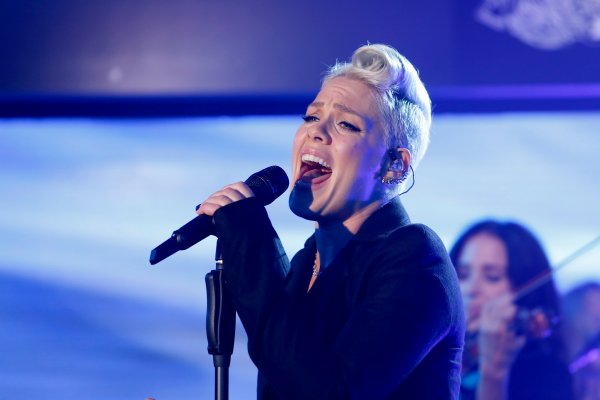 Watch Pink and James Corden on a New 'Carpool Karaoke'
Next Up: Editor's Pick