'He's Got His Own Style.' Handsome Goat Is One of the Most Stylish Guys to Grace Your Eyeballs Lately

One animal at this Malaysian farm has risen above the rest to become the notable handsome goat on the internet.

Harini Ramos, the 11-month-old goat, has garnered all kinds of acclaim and attention for his looks since his owners shared photos of him on their Facebook page. With luscious white locks, Harini has impressed everyone at Muhammad Livestock Farm in Perak, Malaysia. That’s why t, one of the farmers, keeps taking pictures of him. Fadzir tells TIME that he bought Harini, who is of the Saanen breed, from a different farm in March. Saanen goats originated in the Saanen Valley in Switzerland, according to ROYSFARM, an organization that advocates for modern farming methods.

People are going crazy for the aesthetically pleasing animal. According to Fadzir, it’s really the hair on top of his head that makes him special. “He has his own style,” Fadzir told TIME. Some on Twitter and Facebook are even comparing his looks to K-pop stars.

We can all take a lesson or two from this handsome goat who clearly knows his angles and has now joined the ranks of the shapely starfish and the selfie-ready gorillas. 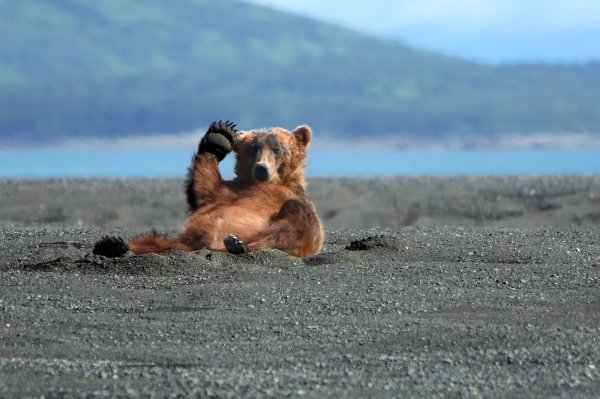 A Very Chill Bear Follows His Bliss By Soaking Its Troubles Away in a Bath
Next Up: Editor's Pick