It’s not everywhere that you might be rewarded for unappealing physical traits. But at the World’s Ugliest Dog contest, the uglier the pup, the better — and the Chinese crested dog often prevails.

Chinese crested dogs, which can be either hairless or with fur, have won the competition nine times since 2002, also winning a pedigree award in 2009 and the People’s Choice Award at last year’s competition. With that high of a success rate at the competition, the breed had a pretty good chance to win yet again at this year’s contest last Friday at the annual Sonoma-Marin Fair in Petaluma, Calif.

A dog Scamp the Tramp looks on after winning the World's Ugliest Dog contest at the Marin-Sonoma County Fair on June 21, 2019 in Petaluma, California.
Justin Sullivan—Getty Images

But the winner of the 2019 World’s Ugliest Dog contest wasn’t a Chinese crested — Scamp the Tramp, whose breed is unknown, stole the show. Scamp, who won against 18 other dogs, was rescued in 2014 by Yvonne Morones, a press release from the competition said.

Though no Chinese crested dogs won awards in his year’s challenging contest, some of the cutest pups there were of the curious breed.

The history of the Chinese crested dog spans continents and centuries, making it difficult to determine its exact root. But the breed got its name from helping out Chinese sailors on 14th century voyages before being traded around the world, the American Kennel Club says. The Chinese crested dog is affectionate, alert and lively, according to a spokesperson for the American Kennel Club, the U.S. registry of dog breeds. The dog is also the 79th most-popular breed in the U.S., out of 192.

As for its success at the World’s Ugliest Dog contest, head judge Brian Sobel says we can chalk that up to a combination of factors. It looks like it’s a hybrid between a rat and a dog, Sobel says, which can make people “repel” at its sight. And whether it’s a hairless or powderpuff kind, every Chinese crested dog has a puffy tuft of hair on its head — which even led to the nickname “Dr. Seuss dog,” according to the American Kennel Club.

But the judges are “looking at the dog for more than the lack of fur, teeth, a bulging eye, or a rat tail, but expanding to look at [the] whole dog, including a bit of personality, and the ability to connect with the audience on some level,” Sobel told TIME in an email. This particular “ugly” dog is also characterized by its comforting, cozy demeanor, according to an American Kennel Club spokesperson — so it’s no surprise that people root for it.

This breed just happens to have “all of the attributes that make them adorably ugly,” according to a spokesperson for the contest.

Beauty is of course in the eye of the beholder. And while the word “ugly” has negative connotations, this event is intended to carry a heartwarming message. The World’s Ugliest Dog programming has been “a testament that the pedigree does not define the pet,” according to the contest’s mission.

The competition’s organizers also advocate for animal adoption — that’s actually why the event was started more than 30 years ago, according to a spokesperson for the event. Most of the contestants are dogs who have experienced some kind of trauma or disfiguration, or were otherwise adopted or rescued from shelters or puppy mills.

“While in good humor it’s called the World’s Ugliest Dog contest, what it really is about is showcasing these dogs’ uniqueness and how special they are, and then also providing information about adoption and rescue missions,” the spokesperson told TIME. Last year’s contest winner was a perpetually-frowning English bulldog named Zsa Zsa, who died less than a month after winning the competition. Zsa Zsa had been adopted after spending five years in a puppy mill in Missouri, the New York Times reported.

This year’s winner, Scamp, won a grand prize of $1,500. The first, second and third place winners also chose animal nonprofits to whom the contest will send equal donations.

If you missed out on online voting for this year’s competition, fear not. Dog lovers of the world — well, basically, everyone — will have another chance next year. 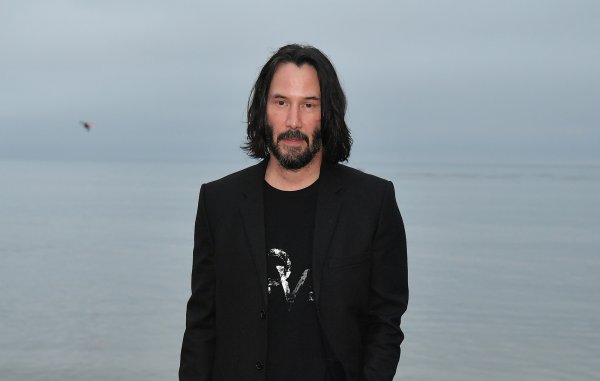 Why Keanu Reeves Has Always Been the Internet's Soul Mate
Next Up: Editor's Pick