It may have been Queen Elizabeth II’s party, but at Trooping the Colour 2019 on Saturday, all eyes were on new parents Prince Harry, Duke of Sussex and Meghan, Duchess of Sussex.

The couple appeared together for the first major public event since Archie Harrison Mountbatten-Windsor’s birth on May 6. Though the one-month-old royal baby stayed home during the event, the Duke and Duchess joined Prince William, Duke of Cambridge and Catherine, Duchess of Cambridge to celebrate Queen Elizabeth’s 93rd birthday.

Meghan smiled as she rode in the processional carriage with her husband, Kate Middleton, and Camilla, Duchess of Cornwall before overlooking the celebrations from the Buckingham Palace balcony. According to People, Meghan wore a navy blue dress by Clare Waight Keller, her wedding gown designer, and a hat by Noel Stewart.

Prince Harry, Duke of Sussex and Meghan, Duchess of Sussex ride by carriage down the Mall during Trooping The Colour, the Queen's annual birthday parade, on June 8, 2019 in London, England.
Samir Hussein—WireImage/Getty Images

The annual Trooping of the Colour, which is the queen’s birthday parade, features military units waving their flags (colours) while marching (trooping) in London. Royal Air Force planes also fly above the spectacle.

Queen Elizabeth was born on April 21, 1926, but the royal family has a tradition of celebrating a monarch’s birthday with this special parade at the start of summer. The queen first attended the Trooping the Colour in 1947, according to the royal family’s Twitter.

With June being ideal weather for an outdoor production, the occasion has been around for more than 260 years, according to the royal family’s website. The day of Trooping the Colour marks a monarch’s “official” birthday.

At last June’s event, just one month after the Duke and Duchess’ wedding, Meghan stepped out in a pink off-the-shoulder Carolina Herrera dress and matching Philip Treacy hat to celebrate the birthday of her grandmother-in-law.

Meghan, Duchess of Sussex and Prince Harry, Duke of Sussex stand on the balcony of Buckingham Palace during the Trooping the Colour parade on June 9, 2018 in London, England.
James Devaney—FilmMagic
Subscribe to TIME 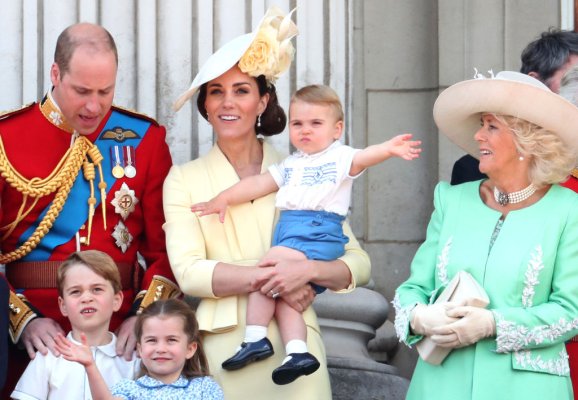 Prince George, Princess Charlotte and Prince Louis Are Clearly the Most Amusing Spectacle at the Trooping the Colour 2019
Next Up: Editor's Pick