By Samantha Cooney and Raisa Bruner

Prince Harry and Meghan, Duchess of Sussex made sure to pay tribute to the legacy of Princess Diana at their royal wedding at St. George’s Chapel in Windsor Castle.

During their engagement interview, Prince Harry said he wished his late mother, who was killed in a car accident in 1997, was there to celebrate the moment with the couple.

“It is days like today when I really miss having her around and miss being able to share the happy news… I’m sure she’s with us, yeah, you know, jumping up and down somewhere else,” he said.

Prince Harry and Markle have frequently nodded in Diana’s direction. Prince Harry specifically used diamonds from Diana’s collection for the engagement ring he designed for Markle, ensuring that her presence was with them since the start of their partnership as an engaged couple. And Markle herself has made at least one subtle nod to Diana’s sense of fashion, wearing the style of beret that she favored. In their commitment to philanthropy, too, both Markle and Harry have continued Diana’s legacy of charitable activities, ensuring that her legacy lives on.

Britain's Prince Harry, Duke of Sussex and his wife Meghan, Duchess of Sussex leave from the West Door of St George's Chapel, Windsor Castle, in Windsor on May 19, 2018 in Windsor, England.
WPA Pool—Getty Images

Meghan’s royal wedding bouquet included forget-me-nots, Diana’s favorite flower. Kensington Palace said in a statement that Prince Harry handpicked the flowers from their private garden at Kensington Palace, and gave them to florist Philippa Craddock to include in the design.

“The spring blooms include Forget-Me-Nots which were Diana, Princess of Wales’ favourite flower. The couple specifically chose them to be included in Ms. Markle’s bouquet to honour the memory of the late Princess on this special day,” Kensington Palace said.

White roses, another flower closely associated with Diana, were also included in the flower crowns of the bridesmaids and throughout the decorations of St. George’s chapel.

Lady Jane Fellowes, the older sister of Diana, read from the Song of Solomon during Saturday’s ceremony.

“Prince Harry and Ms. Markle both feel honoured that Lady Jane will be representing her family and helping to celebrate the memory of the late Princess on the wedding day,” Kensington Palace said in the statement ahead of the ceremony.

US actress Meghan Markle arrives for the wedding ceremony to marry Britain's Prince Harry, Duke of Sussex, at St George's Chapel, Windsor Castle, in Windsor, on May 19, 2018.
JANE BARLOW—AFP/Getty Images

Britain's Prince Harry, Duke of Sussex and his wife, Britain's Meghan Markle, Duchess of Sussex leave St George's Chapel after their wedding ceremony in Windsor Castle, in Windsor, on May 19, 2018.
JONATHAN BRADY—AFP/Getty Images

The wedding ceremony included a performance of the hymn “Guide Me, O Thy Great Redeemer,” which was played during Diana’s funeral.

Britain's Prince Harry, Duke of Sussex and his wife Meghan, Duchess of Sussex wave from the Ascot Landau Carriage during their carriage procession on the High Street in Windsor, on May 19, 2018 after their wedding ceremony.
ADRIAN DENNIS—AFP/Getty Images

The newlyweds asked wedding guests to donate to one of the charities of their choice in lieu of wedding gifts. Two of their selected charity focus on causes close to Diana’s heart: helping children dealing with HIV and AIDS and fighting to end homelessness.

Write to Samantha Cooney at samantha.cooney@time.com and Raisa Bruner at raisa.bruner@time.com. 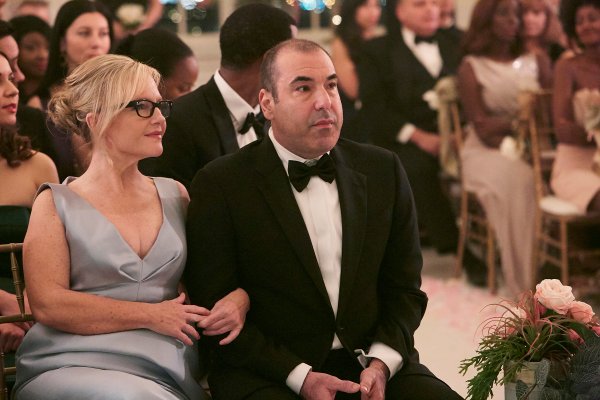