Why Keanu Reeves Has Always Been the Internet's Soul Mate

The fascination surrounding Keanu Reeves in recent weeks has reached a fever pitch with a smorgasbord of summer movies that rely on his talents.

Drawing on the cult appeal of his summer blockbuster John Wick 3, the runaway charm of his cameo as a caricature of himself in Netflix’s Always Be My Maybe, and the introduction of his macho action figure character in the upcoming Toy Story sequel, there’s no doubt that Reeves is the Internet’s man of the moment (even Chris Evans has confirmed this).

But it’s not just Reeves’ on-screen roles that have endeared him to fans — it’s been his candid moments in real life, like securing a shuttle for his fellow passengers when a flight was cancelled or courteously giving up his seat on the subway that have created the almost mythical (and meme-inspiring) aura that now surrounds his person. And although Keanu might be surprised by his status as the Internet’s boyfriend, we’ve known for a while that he’s been the celebrity we deserve.

Here, a look back at Keanu Reeves’ best candid moments over the years.

In an interview with ComicBook.com, Marvel Studios president Kevin Feige revealed that the franchise has been trying to find the perfect role for action star for years now.

“We talk to him for almost every film we make,” Feige said. “We talk to Keanu Reeves about. I don’t know when, if, or ever he’ll join the MCU, but we very much want to figure out the right way to do it.”

In a now-viral clip from 2011, Reeves was spotted on the New York City subway offering his seat to a fellow passenger who was carrying a large bag. Chivalry is not dead, it’s alive and well on the downtown Q train with Keanu Reeves.

In what’s now become a treasure trove of anecdotes about real-life encounters with Keanu Reeves, comes a story that deserves to be the crown jewel. Earlier this year, the actor was stranded with other passengers when a flight from San Francisco to Los Angeles had to make un unexpected landing in Bakersfield. Lucky for them, however, Reeves wasted no time in organizing a shuttle for a road trip of sorts, to get to Los Angeles. During the ride, Keanu proved that it’s not just his beloved character Ted who can have an excellent adventure; during the course of the trip, he read the shuttle fun facts about Bakersfield and used YouTube on his phone to play them music that was native to Bakersfield (country music that was created in the 1950s in and around the farming town).

In 2014, Page Six reported that the easygoing Reeves patiently waited in line in New York City, seemingly unrecognized, for his own wrap party for the film, Daughter of God. Once Reeves made it in the club, he also courteously announced from the DJ booth that he found a credit card on the ground, in an effort to find the owner.

After Keanu was spotted in May 2010 enjoying a sandwich by himself on the streets of New York, the image went viral as a meme on Reddit, before expanding to Facebook and Twitter.

The next month, the internet declared that June 15 would be “Cheer up Keanu day,” a day dedicated to bringing joy to Keanu, that’s now celebrated yearly.

Reeves, himself, even weighed in on the “Sad Keanu” meme, noting that it was “good, clean fun,” although he did wish that “I didn’t get my picture taken while I was eating a sandwich on the streets of New York.”

Keanu Reeve’s reputation as a real-life nice guy is best epitomized by a fan story that went viral on Twitter this year. James Dator shared on Twitter about a kind encounter he had with Reeves while working at a movie theater as a 16-year-old. According to Dator, he tried to surreptitiously get Reeve’s autograph by offering him his employee discount, which Reeves declined out of confusion. A few minutes later, Reeves came back to the box office and gave Dator his autograph on the back of a receipt for ice cream from the concession stand, noting that “I realized you probably wanted my autograph…so I signed this.” Reeves then discreetly threw away the ice cream and enjoyed his movie.

The many times he supported an independent bookstore

Another Keanu fan shared on Twitter that Reeves would make weekly pilgrimages to the bookstore she worked at to buy fiction and sudoku puzzles. His dedication was so great that he would call 20 minutes ahead to reserve his materials, before showing up on his motorcycles to make his purchases. His love of books is so great that he founded a publishing company, X Artists Books, alongside Alexandra Grant in 2018.

Reeves’ cameo in Netflix’s Always Be My Maybe gifted the Internet with a plethora of prime Keanu content, from a slow-motion GIF of Keanu and his hair flowing in the wind to the chance to a much-discussed kiss with comedian Ali Wong. However, its greatest gift to us may have been the song that appears in the credits of the film, as rapped by Randall Park’s character Marcus for the band Hello Peril. Inspired by a scene in the movie where Marcus punches the caricature of himself that Reeves plays, the song is fittingly (and hilariously) titled, “I punched Keanu Reeves” and includes the lyrics: “Best believe I punched Keanu Reeves/
And it was better than any scene you could see in Speed/I hit John Wick/And now I’m feeling so appealing.” As might be expected, it was a hit online.

The time he told an entire crowd that they were “breathtaking”

During an appearance at the 2019 E3 conference, Keanu Reeves was paid an unexpected compliment, when he was describing an experience as “breathtaking” and a fan in the crowd responded by yelling back: “You’re breathtaking!” Reeves responded with mutual admiration, by not only telling the fan that they were breathtaking, but the entire crowd, much to the delight of everyone.

While much of the Internet’s fascination with Keanu Reeves has a humorous element to it, the John Wick star proved that he does sincerity well. During an appearance on The Late Show with Stephen Colbert, Reeves had a perfect and thoughtful answer to a difficult question posed by Colbert, “What do you think happens when we die, Keanu Reeves?” Reeves’ response was earnest and touching: “I know that the ones who love us will miss us.” 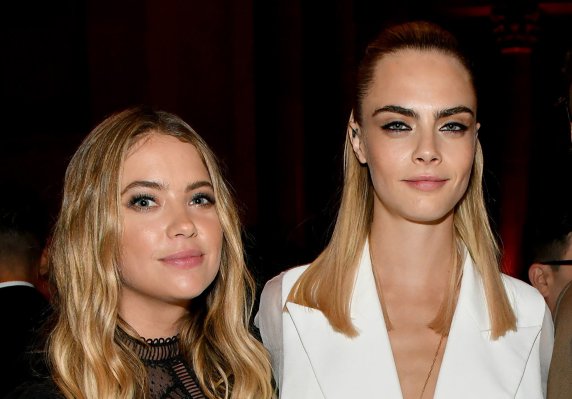 'Because It Is Pride.' Cara Delevingne Discusses Her Relationship With Ashley Benson
Next Up: Editor's Pick