Here's Everything to Know About Taylor Swift's 2019 Album Lover

Rejoice, Swifties: Taylor Swift has new music out, and at last we have answers. Her seventh album, Lover, out now, features 18 tracks, including her first single “ME!” with Brendon Urie, second single “You Need to Calm Down” out June 14 and a third track “Archer.” As a September Vogue cover profile first revealed, the album also includes songs called “The Man” and title track, “Lover,” coproduced with Jack Antonoff.

Early in the spring, Swift began teasing the release and preparing for the fan response. “I love your passion, I love your attention to detail, I love how much you care. I love seeing all the things you’re posting online,” she said of her fans at the iHeartRadio Music Awards on March 14. “I just wanted to let you know that when there is new music, you will be the first to know.”

In April, that promise finally because a reality, as Swift turned her website TaylorSwift.com into a countdown clock to April 26 and began increasing her social media posts captioned with the date “4.26,” which turned out to be the release date for her first single “ME!” And on June 13, Swift further unveiled her plans during an Instagram livestream: a new single, “You Need to Calm Down,” would be out June 14, with the Lover album release date set for Aug. 23, featuring 18 tracks.

“This album is very much a celebration of love, in all its complexity, coziness, and chaos. It’s the first album of mine that I’ve ever owned, and I couldn’t be more proud. I’m so excited that #Lover is out NOW,” Swift tweeted on Friday.

All of these updates followed a period of dedicated speculation from fans after Swift began posting on Instagram again earlier in 2019, putting up a series of color-saturated, cryptic posts of herself starting with a palm tree landscape back in February. Despite the fact that nothing was officially confirmed, that didn’t stop fans from surmising that the pop star’s seventh album must be imminent, marking about a year and a half since the release of blockbuster Reputation.

Swift’s seventh album release date was Aug. 23. As in the past, her first single was released a few months before the full album came out, with other singles dropping in the interim: “ME!” came out in late April followed by “You Need to Calm Down” on June 14, “The Archer” on July 23 and “Lover” on Aug. 16.

Fans had been speculating for months that Swift had already kicked off an album release countdown based on Instagram clues. This theory kicked into high gear for a week back in February when she shared a photo that featured seven palm trees and was captioned with seven palm tree emojis. The next day, she shared a picture of herself reclining on the sixth (visible) step of a staircase. One day later, it was Swift’s face seen through the center of five fence slats. With this theory in mind, day zero on the countdown clock would have been March 2.

But instead of an album, Swift ended up appearing on the covers of Elle U.K. and Elle and continuing her increased Instagram activity. Finally, in mid-April, she shared the countdown to April 26. And on June 13, she revealed the rest of the release schedule. The release date was no coincidence as she explained on her Instagram livestream: Aug. 23 can be construed as 8 + 2 + 3, which adds up to 13. Swift’s favorite number is well-known to be 13, giving that date extra meaning.

Lover. It’s her seventh project. When she posted that Instagram photo with seven palm trees back in the spring — and captioned it with seven more palm tree emojis — some fans quickly took that as a hint that the album, known colloquially as “TS7,” was on its way. Swift is known for including hidden messages in her visual work (especially numerical messages, famously incorporating the number 13 in her mythology). That’s the case once again here; Lover was hidden in the “ME!” music video, as she confirmed on Instagram livestream. “First of all, the fact that you care about that still astonishes me,” she remarked during her June livestream, calling out all the eagle-eyed sleuths who had been dissecting her updates for months. “Another thing you were absolutely correct about was the album title.”

After the iHeartRadio Awards, there was some hype around the idea that butterflies or rainbows would play a role in the next era, thanks to her recent fashion choices and Instagram photos. She continued that glittery, pastel aesthetic into the spring and summer, with posts of pink-hued tulle, iridescent rings and a sparkling heart-shaped brooch. And for all her performances and appearances, she stuck to a palette of rainbows and pastels. For fans of her recent fashion, there’s more news: Swift says she’s collaborated with designer Stella McCartney on a collection inspired by the album, too.

What was Taylor Swift’s last album?

Swift’s last release in November 2017, the triple-platinum Reputation, was her sixth album, featuring buzzy singles “Look What You Made Me Do,” “…Ready For It?,” “End Game,” “Gorgeous” and “Delicate.” The album performed well commercially with blockbuster album sales, became Swift’s fifth top-charting album on Billboard and received plenty of generally positive reviews.

What else has Taylor Swift been working on?

After finishing the Reputation tour in November 2018, Swift released a concert documentary on Netflix on New Year’s Eve. Back in November, she also announced that she had made a significant business move, switching to a new record label and negotiating a deal to own her master recordings while ensuring distribution of any Spotify share sales to artists.

Since then, she’s spent time filming the movie adaptation of Cats in London. She popped up in Los Angeles during Oscars week in February to support her boyfriend of two years, Joe Alwyn. (He’s an actor who was featured in the film The Favourite alongside Best Actress winner Olivia Colman as well as Rachel Weisz and Emma Stone.)

Outside of showbiz, Swift has also dipped her foot into political territory, publicly advocating for the Equality Act and urging her supporters and politicians to sign a change.org petition supporting the cause. And she again made news when it appeared that her long-standing feud with Katy Perry became history.

For her first five albums, Swift stuck to a pretty consistent output schedule of putting out a project every other year in the autumn, starting with her self-titled debut in October 2006. For Reputation, fans had to wait a whole extra year before it became available; the first single dropped in August 2017, with the rest of the album following that fall. That positions this new release as mostly on-schedule, albeit a little early.

How can I listen to Taylor Swift’s new music?

In the past, Swift has been vocal about keeping her music off of streaming platforms to protect her artwork. In 2014, she pulled her music from iTunes, telling TIME in an interview, “I think there should be an inherent value placed on art. I didn’t see that happening, perception-wise, when I put my music on Spotify.” However, she then made her catalog available that summer and her position has clearly evolved since; Reputation became available on Spotify about three weeks after its release.

With Lover, the album was available to preorder on Apple Music prior to its release, and the first singles were released on Spotify and other streaming services. The entire album became available on multiple streaming services on Aug. 23. On her livestream, Swift also teased that there will be four different deluxe hard-copy editions of the album to buy in-store.

What hints did Taylor Swift drop about the album’s songs?

In a September cover profile for Vogue, Swift opened up a little more about the contents of her new album, saying it just might be her “favorite album” so far. “There are so many ways in which this album feels like a new beginning,” she told reporter Abby Aguirre. “This album is really a love letter to love, in all of its maddening, passionate, exciting, enchanting, horrific, tragic, wonderful glory.”

She also gave the reporter a preview listen to two songs that had yet to come out. The title track, “Lover,” was coproduced with her previous collaborator Jack Antonoff, and was described as a “romantic, haunting… classic Swift” tune with one of her “favorite bridges.” And a lyric: “My heart’s been borrowed and yours has been blue / All’s well that ends well to end up with you.”

Another track, “The Man,” flips her role as narrator to play with the “idea of perception,” Vogue said. “It’s a thought experiment of sorts: ‘If I had made all the same choices, all the same mistakes, all the same accomplishments, how would it read?'” Swift asked. The lyrics: “I’d be a fearless leader. I’d be an alpha type. When everyone believes ya: What’s that like?”

There was also a hint that the Dixie Chicks could factor into her work on this album; They ended up being featured on the song “Soon You’ll Get Better.” 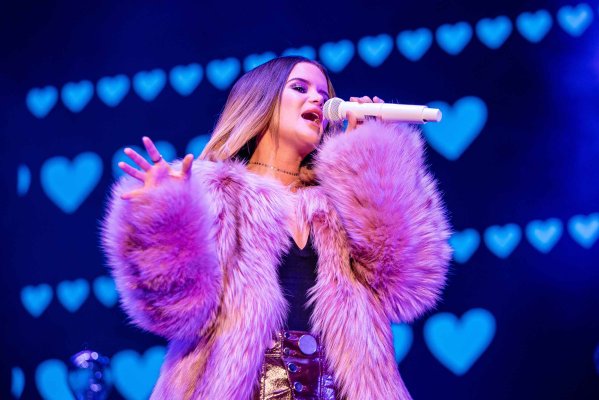 Maren Morris Is the Future of Country Music
Next Up: Editor's Pick