As promised, Taylor Swift released her music video for her new song “You Need to Calm Down” off of her upcoming seventh album Lover on Monday morning, premiering on Good Morning America.

Also as promised, the literally sugar-sweet video (plenty of cake) is filled with celebrity cameos from the likes of Katy Perry, Laverne Cox, RuPaul, Ryan Reynolds and the guys of Queer Eye, all of whom are having a blast in a rainbow-hued, idyllic trailer park. The song takes an equality-first stance, criticizing haters and homophobes alike, and ends with a call to followers to support her Senate petition in favor of the Equality Act, tied in with this month’s celebrations of Pride Month.

Here are the many Taylor Swift easter eggs — both within the Swift universe and to pop and celebrity culture more broadly — that the video, co-directed by Drew Kirsch and Swift herself, contains.

At the beginning of the video, Swift is at home in a trailer decorated lavishly in bubblegum style. There’s a quick cut to a poster with powerful meaning, though: it’s actually a framed Cher quote, from a 1996 interview with the star who rejected certain societal norms and viewed men as a luxury like “dessert.” In the interview, Cher reflects on her mother’s desire for her to settle down and marry a “rich man.” Cher’s reponse? “I said, ‘Mom, I am a rich man.'”

That Breakfast at Tiffany’s face mask

One of the classic scenes in Audrey Hepburn’s seminal 1961 movie Breakfast at Tiffany’s features the actress in a Tiffany-blue silk sleep mask, embroidered with golden closed eyes. Swift’s sleep mask in her music video is lavender silk, and is embroidered with the script “Calm down,” in a possible reference to Hepburn’s style.

A watch with a cat face

Pretty much everyone knows Swift is a cat lover. She even recently picked up a new kitten, who made his debut to fans in her music video for “ME!” So Swift’s nod to her feline fixation in this video is revealed on her watch, where the face has an illustration of a cat.

Last week, Swift announced that the title of her upcoming album — it’s due out Aug. 23 — is Lover. She snuck in a nod to the title in the “You Need to Calm Down” video by having it emblazoned on the back of a glittery phone case (which promptly catches fire, soon after she tosses it down).

A giant butterfly back tattoo

Just before she shrugs on a hot pink fur jacket, we get a quick peek of Swift’s back, which is almost completely covered in a giant tattoo. The ink depicts a snake in the middle of her back, which expands up into a cloud of butterflies that reach to her shoulders. The tattoo is an ink version of a similar visual from her “ME!” music video, showing her metamorphosis from the Reputation-era snake theme into the Lover era, filled with rainbows and butterflies.

Swift also spends some time in the video lounging in a pool float in the middle of a perfectly circular and fairly luxe kiddie pool. The scene has strains the arty pool photos that have become popular in the past few years, thanks to drone photography. But the pool float also brings to mind Swift’s own history with floaties: in past years, she was known for hosting lavish summer parties with extravagant floats and slides and a raft of celebrity attendees.

The next segment of the “You Need to Calm Down” video features stars like Laverne Cox, known for her activism for transgender rights, and Hannah Hart, a YouTube comedian known for her series “My Drunk Kitchen,” who are each hanging out in their respective front lawns and get moments to shine.

When Swift sings, “But you’re coming at my friends like a missile,” that’s the cue for Hayley Kiyoko to appear, wielding a bow and arrow — a missile of a more medieval variety. Kiyoko is herself a pop star with hits like “Curious” and “Girls Like Girls,” known as an LGBTQ+ rights advocate and beloved by fans for improving lesbian representation in pop. In the video, Kiyoko hits a bull’s eye with her arrow in the center of a target stamped with the number 5, a hint that some are taking to mean she might feature on the fifth track of Lover.

On July 23, Swift released the next song in the album — “The Archer.” While Kiyoko did not end up featuring on the song, it is the fifth track on the Lover album, as fans have noticed based on its appearance on the iTunes preorder list. And it turns out this bulls’ eye from “You Need to Calm Down” was an Easter Egg for the song all along. “The Archer” is a shift from the tone of her lead two singles, a downtempo, introspective pop ballad. “I never grew up, it’s getting so old, help me hold on to you,” she sings in the new song. “I’ve been the archer, I’ve been the prey. Who could ever leave me darling? Who could stay?”

Throughout the song, Swift admonishes those who tear others down. “Why are you mad when you could be GLAAD?” she asks, referencing the LGBT representation advocacy group. Anti-LGBTQ+ protesters appear sporadically throughout video, carrying signs like “Homosexuality is sin” and easily distinguishable from Swift’s friends with their less-than-colorful attire. This spring, Swift has taken a stand as an LGBTQ+ ally, sharing a petition on change.org for political support for the Equality Act and writing a letter to her senator.

Jesse Tyler Ferguson (of Modern Family fame) and his husband Justin Mikita get a chance to re-enact their wedding kiss in the video — officiated by Ciara. (Swift further showed up for Ferguson over the past weekend, joining him at the Stonewall Inn in New York City to play a song live.)

A sip of tea with Tan France

Tan France is the fashion guru on the Queer Eye reality show, and in “You Need to Calm Down,” he gets his solo moment with a pot of tea — which he gracefully pours down his throat. Not only is France a British citizen, making his tea cameo particularly apt, but as we know, “tea” in pop culture slang is also a reference to hot gossip, about which France appears fully unbothered. Swift then extends the tea metaphor, sitting down to a literal tea party with the rest of the Queer Eye gang — including Antoni Porowski, Karamo Brown, Bobby Berk and Jonathan Van Ness — as she sings “You just need to take several seats.”

Olympic figure skating star Adam Rippon is also spotted serving — what else? — the ice-based treat of Sno-Cones, most likely in a wink to his prowess on the ice.

A tattoo for Ellen DeGeneres

Show host and star Ellen DeGeneres is next spotted inside one of the trailers, getting a tattoo on her arm from Adam Lambert that reads “Cruel Summer.” This one is a bit of a mystery; “Cruel Summer” could be referring to the 1983 pop single by the British girl group Bananarama, but that’s a pretty oblique callback. Fans speculate it could be the title of another Lover song.

As Swift and her squad recline on lounge chairs with reflective screens to maximize their sun time (and minimize the “shade,” metaphorical and literal), a group of anti-LGBTQ+ protesters encroaches on their space, holding up signs. One reads “Get a brain morans (sic)!” In her last song “ME!” Swift made it a point to call out the importance of spelling. “Hey kids, spelling is fun!” she insists in those lyrics.

Tony-winning actor, Pose star and red carpet icon Billy Porter makes his cameo sashaying down the line of sunbathers in a caftan, just as Swift sings, “Can you just not step on his gown?”

A lineup of former Drag Race contestants and a famous Beyoncé impersonator participate in a “pop queen pageant,” each dressed up as a different star. Spotted: Tatianna as Ariana Grande, Trinity The Tuck as Lady Gaga, Delta Work as Adele, Trinity K. Bonet as Cardi B, Jade Jolie as Swift, Adore Delano as Katy Perry, A’keria C. Davenport as Nicki Minaj and Riley Knoxx as Beyoncé.

RuPaul with a prize crown

But instead of giving the pageant crown to just one of the contestants, RuPaul appears onstage and then tosses it up in the air. It seems like all the pop queens are meant to share the crown, á la Mean Girls, perhaps.

Ryan Reynolds at work on a painting

Deadpool actor Ryan Reynolds has long been in Swift’s universe; he’s married to Blake Lively, one of her squad members of years past, and has popped up at those summer bashes she used to throw. Here, he makes a cameo as a painter, focusing intently on painting a canvas based on a photograph of the historic Stonewall Inn, the site of the 1969 police raid that is considered to have kicked off the modern LGBTQ+ rights movement.

Katy Perry as a hamburger

At the 2019 Met Gala, Katy Perry dressed up for the after-party in a full-on hamburger costume. She reprises that look for appearance in Swift’s “You Need to Calm Down” video. Swift, herself in a French fries costume, seeks Perry out in the midst of a joyous food fight. The two were previously known to have been involved in something of a standoff, but recently have declared “peace at last.”

This spring, Swift has been putting forward a Senate petition for the Equality Act via change.org, asking supporters and politicians to support her campaign. She throws in an ending card shout-out to the Equality Act here as well. “Let’s show our pride by demanding that, on a national level, our laws truly treat all of our citizens equally,” it reads. 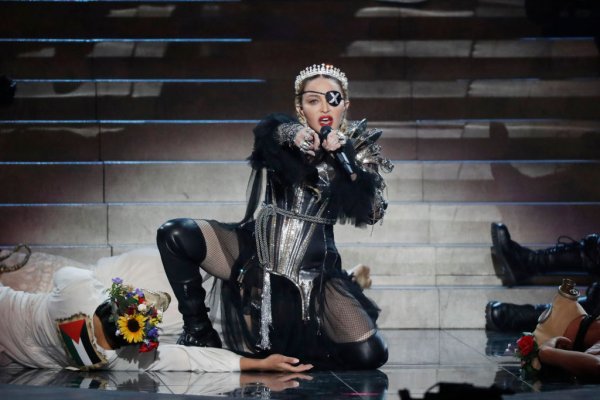