Finally, we have answers: Taylor Swift’s new album will be called Lover and will be released on Aug. 23 of this year, featuring 18 tracks. And her new single, called “You Need to Calm Down” is coming out June 14, with the music video following on June 17.

After months of teasing the upcoming drop of her highly-anticipated seventh album, Taylor Swift took to Instagram on Thursday afternoon to update fans and eager followers about the Lover album news. First, she thanked fans for their dedication to putting their detective skills to use trying to preempt her announcement.

“I’ve been so, so, so honored,” she said. She also elaborated on what to expect on Lover: “This album, in tone, it’s very romantic,” she said. “Not just simply thematically, like it’s all love songs or something. The idea of something being romantic…it doesn’t have to be a happy song. You can find romance in loneliness or sadness or going through things in your life… it just looks at those things through a romantic gaze.”

Swift most recently dropped her newest single “ME!” featuring Panic! at the Disco’s Brendon Urie in late April, signaling the next step in her new, post-Reputation creative phase. “In the ME! music video there were a lot of foreshadowing clues,” Swift admitted in her livestream, noting that fans had guessed the album title based on Easter eggs in the video. And in true Swift form, she noted that the release date of Aug. 23 is no fluke, either. “August is the eighth month of the year. 23, 2 + 3, you just add it all together, 8 + 2 + 3 equals… I’m obnoxious,” she joked. (Swift’s favorite number is, famously, 13.) At 18 tracks, it’s also her longest album yet.

After a period of dormancy, Swift has been active on social media and in public this spring and early summer, appearing on magazine covers, performing at the TIME 100 Gala to celebrate with her fellow honorees and sharing a new, butterfly-and-rainbow-filled aesthetic in a sharp shift from her last tour’s darker edge.

Beyond her music, Swift has recently made headlines with political statements. She is celebrating Pride Month by calling on her followers to sign a change.org petition to support the Equality Act, publicly posting a letter to her Tennessee senator for his support and applauding Democratic presidential candidate Corey Booker for his signature.

Swift also appeared to bury the hatchet this week with fellow pop star Katy Perry. The two were rumored to be involved in a long-standing feud involving a backup dancer, but Perry shared on social media a photo of a batch of cookies with frosting spelling out “peace at last” — and tagged Swift in the caption. 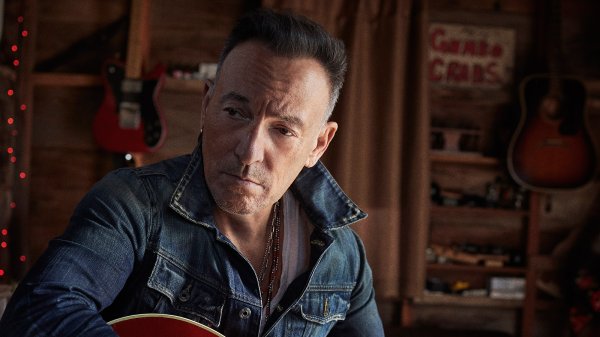 In a Culture War Over the Military, Bruce Springsteen Stands Alone
Next Up: Editor's Pick