These People Didn't Win Gold Medals at the 2018 Winter Olympics. But They Won the Internet Instead

When we think of the Olympics, we think of elite jocks smashing records and capturing that hardware.

But let’s not kid ourselves, on social media the barometer for success is different. Anyone — Olympian or not — can achieve a different kind of victory: winning hearts across the internet. And when they do, viewers embrace a person tighter than Yuzuru Hanyu clutches one of his lucky Winnie the Pooh bears. Becoming a magically viral hit is always the kind of unpredictable win years and years of training just can’t guarantee. So let us praise the online victories at the 2018 Winter Olympics.

Here are eight people who won the internet, despite not snatching a gold medal in an event.

Though technically, he helped the American team win bronze, he had some extremely notable individual achievements. Remember back when Adam Rippon wasn’t known as the most dependable quote machine of the PyeongChang games? You may not because the charmer consistently proved he could spin internet gold out of any interaction. He delighted the internet by skating to Rihanna covered in crystals. He really delighted the internet with quips about caring more about prioritizing Reese Witherspoon over his own mother because of her relatively smaller Instagram following. He really, really delighted the internet because he was his authentic self. That’s just Rippon’s trademark “witchcraft.”

To be fair, Ghana’s skeleton racer Akwasi Frimpong’s Olympic run was short-lived, but he’s the kind of athlete who can make a lasting impression quickly. For one thing, his helmet depicting a rabbit escaping from the clutches of a lion was an object of endless fascination. And then he went viral again, and his exit takes the cake. Maybe he wasn’t planning to be an internet darling. But when you celebrate last place with a victory dance this joyful, that’s what happens.

The women’s Jamaican bobsled team made history by becoming the first Jamaican women to compete in the Winter Games, Cool Runnings style. They didn’t come close to podium glory, but the internet was glued to every move the tag team Jazmine Fenlator-Victorian and Carrie Russell made. They got there, and then they really went to work persevering through it all. More than enough to catapult them into darling territory.

Two words. Double sunglasses. South Korea’s Reddit-savvy figure skater Alex Kang-chan knows how to play the internet perfectly, and he became one of the most meme-d people of the Olympics with one move. Kam simply took off his Olympic ring glasses to reveal another pair — aviators. He did it with the suave ease reserved for superheroes, heartthrobs and Alex Kang-chan Kam. A rare and especially smooth maneuver that involved an extra accessory and plenty of attitude. Not a stretch to call it the smoothest fashion moment in Olympic history. Congratulations to him for redefining human achievement with his eyewear.

Pro-tip: if you want to be a viral star, even when you’re on the sidelines, be ready to ham it up.

After helping to secure bronze in the team event, American fan favorite Nathan Chen had two shocking off-his-game days, but that’s what made watching the true talent’s comeback so captivating. Once he was out of the running for a medal, he came back emboldened to nail six quads, the world record. Whether he was succeeding on the ice or making missteps, the internet’s love for him never died. He left people stunned, wanting to hug him, adopt him, and above all, with him for every leap of faith.

6. Ivett Toth
The new lyrics-allowed policy for figure skating meant people enjoyed some unorthodox song selections for the first time. But one skater really endeared herself to the internet by becoming a one-woman AC/DC tribute band on the ice. Skating to a “Back in Black” and “Thunderstruck” medley, Hungary’s Ivett Toth endowed the rink with with honorary toughness that was so rock and roll, people fell in love. A dynamo, the tough skater in studded leather came to throw down and she did not disappoint. The 53.22 points she scooped up for her short program routine simply do not reflect her internet-anointed rock deity status. We’re not worthy.

People like K-Pop a lot. But even CL and EXO had to cede some of the spotlight to the most rock and roll person to ever grace the Pyeongchang Olympic Stadium stage during the closing ceremony. The thief in possession of the entire show was Korean 13-year-old wunderkind Yang Tae-hwan who shredded up a storm with his rendition of the Antonio Vivaldi concerto “Winter.” Brimming with verve, banging his head and wailing away as the drones took to the sky, he became an instant internet smash.

As 17-year-old reigning snowboarding queen Chloe Kim handily captured gold for America in the Women’s Half Pipe, father Jong Jin Kim cheered her on with a DIY, laminated sign proving he had what it takes to dominate the obscure but time-honored sport of competitive parental Winter Olympics 2018 signs. The internet was crazy for this one.

You may now return to the Olympians winning medals, but remember the people who won internet gold. 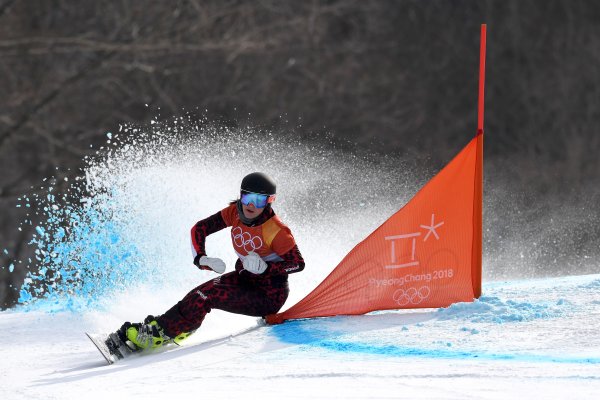