Here's All the Best Stuff From Comic-Con in One Place

Every year, studios and television networks bring their biggest movies and stars to San Diego Comic-Con. There, fans judge which films they will be lining up for and shows they’ll be adding to their Netflix queue in the next year. They also get a look at exclusive trailers and the chance ask actors to reveal their characters’ secrets.

This year, Marvel dropped new stunning footage from both Thor: Ragnarok and Black Panther. Fans worshipped at the altar of Wonder Woman. Harrison Ford growled at some fans. Barb from Stranger Things surprised the rest of the show’s cast. And The Simpsons creators led fans in an “Lock him up” chant.

Here were the trailers, quotes and panels that stood out at the convention.

Marvel puts on a better show than anyone else at Comic-Con. Prioritizing announcements and sneak peeks over actor Q&As, the studio realizes that the nerds in attendance only care about the cool stuff.

Director Taika Waititi and star Chris Hemsworth introduced a new Thor: Ragnarok trailer by saying they were “bored” with what Marvel had been doing with the Thor character in previous films. The new take looks delightfully deranged.

Harrison Ford Promises to Reboot All of His Movies

Harrison Ford appears to be on a mission to relive the glory days of his career. He recently revived Han Solo in Star Wars: The Force Awakens, stars opposite Ryan Gosling in the followup to Blade Runner this summer and will return as Indiana Jones in 2020. Still, it took quite a bit of courage for a fan to ask the legendary actor if he plans to reboot every major franchise he’s ever starred in.

Ford had the perfect answer: “You bet your ass.”

New footage from the highly-anticipated Black Panther movie — unfortunately not available online yet — received a standing ovation at Comic-Con. An exclusive trailer, set to the tune of Kendrick Lamar’s “DNA” promised fans a film filled with emotion and action. Lupita Nyong’o and Danai Gurira stood out in a scene where they exchange blows with bad guys at a casino. Though we’re finally starting to get more female superheroes onscreen, there are far to few female fighters who aren’t white, so it’s fantastic to see these two women duking it out alongside Chadwick Boseman and Michael B. Jordan.

This was just impressive. During the panel for Kingsman: The Golden Circle — which is adding Halle Berry, Channing Tatum, Pedro Pascal and Jeff Bridges to the original film’s cast — the actors starting taking shots of whiskey. Berry, not to be outdone by her male costars, chugged what looked to be an entire glass of whiskey onstage.

Comic-Con was filled with little girls dressed up as Wonder Woman this year. Wonder Woman relished her well-earned cultural victory, as Warner Bros. was smart enough to feature the hero heavily in its new Justice League trailer. And star Gal Gadot also made headlines for comforting a crying young fan.

The Simpsons Creators on Donald Trump

"The Simpsons" imagines what President Donald Trump's first 100 days in office were like.
Courtesy of FOX

Comic-Con tends to be pretty apolitical. Ask writers and producers their opinions of government officials, and they often obfuscate. Not so for the team behind The Simpsons. When a fan asked during The Simpsons panel if the writing team had ever turned down an offered celebrity cameo, executive producer Al Jean answered, “Let’s just say he’s the President of the United States.”

Another audience member asked if Fox had ever told the writing team to axe jokes about Fox News. “We started doing Fox News jokes, and they asked us to take it easy on them,” creator Matt Groening said. (The request came after the show joked that the cable news channel was “not racist, but No.1 with racists.”) Later, the Simpsons team led the room in chants of “Lock him up!”

The Mere Presence of Steven Spielberg

Comic-Con began as a small comic book convention. It has since grown to a celebration of all things geeky, including the biggest films of the year. Still, there’s something legitimizing about one of the most famous directors in history entering Hall H to talk about his new film, Ready Player One.

Theon Greyjoy Is a Softie After All

Alfie Allen doesn’t have the best track record with dogs onscreen. In Game of Thrones, he almost stabs Bran’s baby direwolf to death. In John Wick he murders a puppy.

But the actor proved that offscreen he’s an animal lover by showing up with his dog, Abbie, at the Game of Thrones panel. She was very well behaved and sat on his lap quietly throughout the hour, occasionally pawing at the table.

“Thriller” in the Stranger Things Trailer

Stranger Things took the world (and the Upside Down) by storm last summer. Whether the Netflix show can top the scares of the first season has yet to be seen. But the show has certainly doubled down on the nostalgia factor. The trailer for season two, released at Comic-Con, included references to the arcade game Dragon’s Lair, a Reagan-Bush ’84 campaign sign and the Vincent Price introduction from Michael Jackson’s classic “Thriller.”

Oh, and Barb showed up.

Will Smith’s Love of Star Wars

Ever the charmer, Will Smith took the stage at Comic-Con with Terry Crews. Smith went on to answer questions with disarming honesty. In fact, the actor wins best quote of the convention with his comments on Star Wars. During the panel for his upcoming Netflix movie, Bright — a crime drama-fantasy mashup with orcs and fairies — he talked about his love for genre films, especially Star Wars.

“When Star Wars came out, there weren’t special effects. You couldn’t do that. So we were just completely blown away,” he said. “For my entire life I’ve been chasing trying to give that feeling to fans.” He added: “There was nothing that I had experienced in my life that matched that point of ecstasy,” he added. “I had sex a few years later. It was close, but no Star Wars.”

Nostalgia is the name of the game these days. (The 80s, especially, are having a moment in Atomic Blonde, Ready Player One and Stranger Things.) In that vein, networks are bringing back some beloved fan favorites. USA’s TV show about a faux psychic detective, Psych, is getting a Christmas movie. Nickelodeon fans are getting a TV movie for Rocko’s Modern Life. And Disney has scheduled a DuckTales revival to premiere later this year. 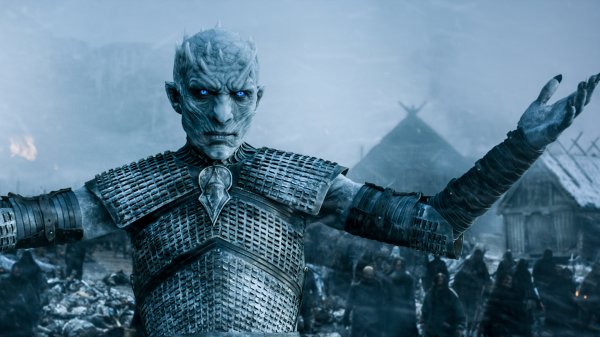 This Tiny Game of Thrones Detail May Reveal How the White Walkers Will Get Past the Wall
Next Up: Editor's Pick