Moldovans Fear They’ll Be Putin’s Next Target. Their Prime Minister Is Preparing for the Worst

Natalia Gavrilița knows she is in a tight spot. It is, after all, the job of Moldova’s Prime Minister to project control, an easy calm, the sense that everything will work out fine. But Gavrilița also knows that the humanitarian fallout from Russia’s invasion of Ukraine is fraying the seams of her nation, which by some metrics is Europe’s poorest. So as we wrap up our interview in the capital, Chișinău, chatting before her nation’s tricolor flag with its embossed eagle motif, she double-checks herself.

“Perhaps I should have been stronger on the need for help,” she muses aloud. “Because we need green corridors [taking refugees to third countries], we need assistance, we need expertise, we need help to deal with economic concerns. We are small, and so panic can quickly unbalance the economy.”

Russian President Vladimir Putin’s invasion of Ukraine has done many things: sent 2 million refugees hurrying to neighboring countries, upended Europe’s security architecture, severed global supply chains, and revived fears of nuclear war. But as with any rowdy neighborhood, the smallest suffer most, and they don’t come smaller than landlocked Moldova, whose population of 2.6 million is less than Chicago’s.

Still, the plucky nation had already welcomed at least 270,000 refugees from besieged Ukraine—which envelops Moldova across three compass points, with Romania to the west—when TIME sat down with Gavrilița in her office March 8. And despite a GDP per capita PPP of $13,000 last year—ranking somewhere between Paraguay and Egypt—the warmth of that welcome has been stunning. Ordinary Moldovans opened their hearts and homes to the influx, ferrying soup and medical supplies to the border, or standing ready with a smile and hug.

Arrivals with disposable income have crowded into hotels and apartments, children running feral in marble lobbies, and business centers have been transformed into makeshift crèches. At Chișinău Arena, hundreds of cots are filed with Ukrainian families with nowhere else to go. “It has been a mobilization of the entire society,” Gavrilița says proudly. “But we are very rapidly reaching our capacities.”

To that end, U.S. Secretary of State Anthony Blinken arrived in Moldova March 6 to show support and promise $18 million over the next few years to “strengthen and diversify” Moldova’s energy sector. “Energy security is actually critical to maintaining one’s sovereignty and independence,” Blinken said.

So is keeping Russian tanks and soldiers’ forces outside one’s borders, but on that point Washington is more reticent. President Joe Biden used his first State of the Union address to vow to defend “every inch” of NATO territory, but added that “our forces are not going to Europe to fight [for] Ukraine.” Neither Ukraine nor Moldova are members of NATO.

“Moldovans must be very nervous,” says Daniel Fried, a former assistant Secretary of State and U.S. ambassador to Poland. “Biden drew a hard security line and Moldova is on the wrong side of it.”

The anxiety is indeed palpable. On the foggy first morning day of Russia’s invasion, Feb. 24, locals in Moldova’s low-slung capital could hear artillery fire from the street. Moldovan airspace closed as soon as the invasion started. On March 1, a strong Putin ally, Belarusian President Alexander Lukashenko, gave an extraordinary televised address to his security council detailing the Kremlin’s invasion plan on a huge map that appeared to include Moldova for occupation. Upon summoning the Belarus Ambassador for an explanation, Gavrilița was told “the map was a misunderstanding,” she says. “Of course, we do not believe this is a satisfactory answer.”

As the fighting draws closer, Moldovans across the social and political spectrum are wondering whether they could be next. Ukraine’s besieged Black Sea city of Odessa lies just 35 mi. from the shared border. For Igor Munteanu, a former Moldovan MP and Ambassador to the U.S., Biden’s remarks describing the limits of the U.S. response were “almost an invitation for Putin to expand,” he says. “If Russia feels there is a weakness, they will exploit it. Moldova is on the front line to be the next victim of this war.”

A group of refugees at the border of Palanca between Ukraine and Moldova, on March 6, 2022
Sidney Lea Le Bour—Hans Lucas/Reuters

A Country on the Precipice

Staving off conquest would make a vivid, albeit vaguely medieval, addition to Gavrilița’s résumé. After graduating in law at Moldova State University, she went on to collect a master’s in public policy at Harvard Kennedy School before taking various development posts across Eastern Europe, Asia, and Africa. She served as executive director of the World Bank’s Education Reform Project before entering politics in her homeland, where she served as Finance Minister.

Development, rather than survival, has been her focus. Moldova’s problems have been dominated by a torpid economy. In 2019, around 246,000 Moldovan migrants were working or ready to live abroad on a temporary basis, some 27% of the total labor force and one of the highest rates in the world. Remittances accounted for $1.9 billion, or 16% of GDP, that same year.

At home, industry traditionally tended toward agriculture, particularly wine, which accounted for $80 million in exports in 2019. But thanks in part to a 2014 Deep and Comprehensive Free Trade Area (DCFTA), which reduces tariffs and smooths customs procedures with the E.U., the nation is becoming an auto-manufacturing and IT hub. The pandemic, soaring energy prices, and endemic corruption were considerable headwinds, for sure. But the future was getting brighter; GDP expanded 21.5% in the second quarter of last year.

Today, Chișinău is a mix of crumbling Soviet apartment blocks with the odd glass office tower sprouting through cracked streets. The day before Russian tanks rolled into Ukraine, Gavrilița wrapped up an international conference on national development strategy, including long-term plans for strategic infrastructure and investment projects to boost living standards. But with events moving beyond Moldova’s control, her government can no longer “concentrate on improving the lives of [our] citizens.”

Putin’s adventurism has cast a pall of uncertainty across the whole of Eastern Europe. Nearly all that Russian oil and gas passes through Ukraine, and fighting at Ukraine’s nuclear power plants has raised sharp concern. Moldovans who can trace ancestry to neighboring Romania can apply for dual nationality, making a significant number of Moldovans eligible for Romanian E.U. passports and thus able to work across the bloc. (The Prime Minister numbers among them, for which she’s received criticism domestically.) Gavrilița’s economic plans now face the twin pressures of absorbing hundreds of thousands of refugees while—if instability persists—the prospect of a domestic workforce seeking jobs elsewhere looms.

On March 3, as war raged next door, Moldova officially applied to join the E.U. It’s a risky move, given that Ukraine’s flirting with the bloc was perhaps a trigger for Putin’s invasion. Gavrilita says E.U. ascension was “a logical next step,” but admits the desire was “hastened” by the crisis: “I think this is particularly important during this time.”

People fleeing Ukraine arrive at a refugee camp near Palanca Village, some three kilometers from the Moldova-Ukraine border, on March 7, 2022
Dumitru Doru—EPA-EFE/Shutterstock

Moldova’s E.U. aspirations were hardly secret. Since 2014, every government building has displayed the national and blue E.U. flag side by side. But gauging Putin’s reaction in light of recent events is tricky. Moldova spends just 0.4% of GDP on defense, and its “Lilliputian” security forces, as Mutaneau puts it, consist of just 8,000 soldiers and 18,000 police.

Moldova, like Switzerland, has rooted its security in constitutionally enshrined neutrality. But like Ukraine, it spent half a century as part of the Soviet Union, the breakup of which Putin calls “greatest geopolitical catastrophe” of our time. In fact, Russian troops are already in Moldova—an estimated 1,700 of them in an unrecognized breakaway province loyal to the Kremlin called Transdniestria.

The history of that breakaway is telling. Moldova, after centuries of assorted forms of independence, began the 20th century administered by Romania. Then, in 1940, Josef Stalin—in his Machiavellian thinking—annexed Moldova to the USSR, while adding a slither of territory tracing its border with Ukraine, thus weakening his western neighbor while injecting an ethnically Russian minority into the new state that, he hoped, would guard against any potential reunification. That sliver was Transdniestria.

After the collapse of the Soviet Union, Transdniestria in 1990 declared its own independence, and a short but bloody conflict ensued. A ceasefire has held since July 21, 1992, though the state remains in limbo, unrecognized by any U.N. member. Still, an imperious statue of Lenin looming over its Brutalist parliament building is an unambiguous indicator of loyalties. It remains propped up by Russia due to a steady supply of free gas that funds energy production and smelting works. (As of 2019, Russian state energy firm Gazprom was owed $8 billion by Transdniestria, though Gazprom has shown no urgency to collect.)

It’s lost on few in Moldova that Russian control of southern Ukraine would provide a land bridge to Transdniestria, where there’s reported to be Eastern Europe’s largest munitions dump at Cobasna, containing 20,000 tons of Soviet-era weapons. Gavrilița is first to admit that Moldova would be powerless to prevent Transdniestria from breaking away to join Russia should it, or the Kremlin, wish. “As a neutral country, we have not been building any military capacity for war,” she says.

So narrow is the tightrope Gavrilița must walk that, while condemning Putin’s invasion and offering humanitarian assistance to Ukrainians, Moldova has stopped short of joining sanctions on Russia. “Our economic, energy, and social resilience does not allow us to undertake such steps, particularly with this war currently going on in our vicinity,” the Prime Minister says. (The E.U., bowing to its own hard realities, continues to replenish Putin’s war chest with $1 billion of oil and gas purchases every day.)

On another front, however, Gavrilița is battling an “intensification of disinformation and fake news,” she says. Moscow is filling local media with false reports of Ukrainian refugee misdeeds and offering specious justification for Putin’s invasion. Since many Moldovans habitually tune in to Russian television channels (mainly for their higher-production soaps), this propaganda filters through, despite the best efforts of the free press.

But along with refugees, words are primarily what that Moldova has at the moment. “We expect everybody to respect our neutral status, and for the international community to support this,” Gavrilița says. “And to help Moldova in this request to remain neutral.” 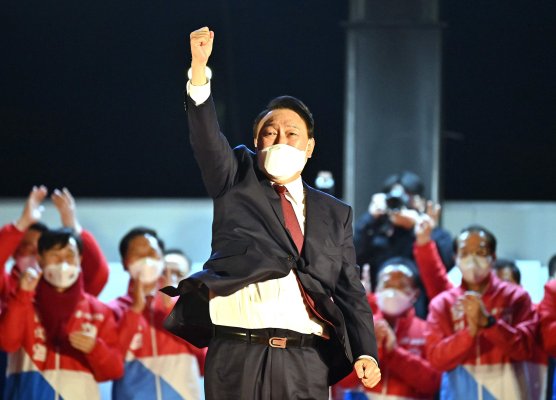 How South Korea’s Next President Capitalized on Backlash
Next Up: Editor's Pick