To keep Martin’s Snacks’ 80,000-square-foot south-central Pennsylvania factory humming throughout COVID-19, CEO Butch Potter has had to shell out 20% more for potatoes than he did pre-pandemic. His packaging film expenses have increased 35%. Box prices are up 30%. He’s also had to raise wages to retain and recruit talent.

None of his operating costs increases, however, are as extreme as the price hikes in cooking oils—mostly of the sunflower and cottonseed variety—that Potter requires to produce snacks such as Jalapeño Kettle Cook’d Chips and Slender Pop Sea Salted Popcorn. Cottonseed oil costs Potter $0.99 per pound right now, he says. Eighteen months ago, it was half that. Sunflower oil is now $1.28 per pound, versus the $0.60 it cost in September 2020.

Much of these increases can be attributed to inflation stemming from the pandemic and its impact on the global supply chain. The coronavirus has upended the number of employees willing to work retail and factory jobs and precipitated unprecedented labor shortages in the trucking and shipping sectors responsible for bringing raw goods from their origin points to manufacturers, manufacturers to retailers, and retailers to consumers. The logistical constraints have increased lead times and decreased the supply of everything from lumber to cream cheese to computer chips and edible ones, causing price hikes for businesses and consumers. Inflation increased 7.5% between January 2021 to January 2022, according to the U.S Bureau of Labor Statistics. It was the fastest acceleration of the price of consumer goods since 1982.

But consumers looking for a reprieve should instead search for patience. Now, another cataclysmic global event promises to further fracture the already crumbling supply chain: Russia’s invasion of Ukraine. “It’s almost like you’ve been sick for a while, and you’re recovering, but then you catch another illness,” says Patrick Penfield, a supply chain management professor at Syracuse University. “Unfortunately, it causes everything else in your body to react adversely.”

The two countries are key players in certain major global industries, like computer chips, sunflower oil, grains, petroleum, and wood. Together, they account for more than a quarter of global wheat exports. Ukraine produces somewhere around 70-90% of the world’s neon gas, which is a vital component of the microchips used to manufacture smartphone and computer screens. Russia is responsible for 13% of the world’s crude petroleum exports, which means anything that requires transportation at any stage of production—almost everything—will be impacted. Penfield predicts inflation may hit 11% by the end of the year.

Companies like Martin’s Snacks that rely on sunflower oil will be particularly vulnerable. Ukraine is the largest exporter of sunflower oil in the world, responsible for up to 46% of sunflower-seed and safflower oil production, according to the Observatory of Economic Complexity. The second largest producer is Russia, which exports about 23% of the world’s supply.

Even before Russia invaded Ukraine, Potter was anticipating having to spend an additional $1.2 to $1.4 million dollars on sunflower and cottonseed oil this year. To put that in perspective, Martin’s Snacks does about $22 to $24 million in sales annually. In the last year and a half, cooking oil “was our biggest cost issue” says Potter. That was “before Russia went crazy.”

Despite raising prices and having what Potter describes as “great sales,” the worsening supply chain hurdles mean that Martin’s Snacks is losing money. Potter says: “It’s going to be a negative year.”

‘There’s no way to speed it up’

The vast majority of sunflower oil used by American companies like Martin’s Snacks—which itself requires roughly 45,000 pounds of sunflower oil every 10 days—is manufactured domestically. But that doesn’t mean American manufacturers will be insulated from the global crunch on sunflower oil, which has grown increasingly popular in recent years due to its neutral taste and lower saturated fat content than its alternatives like vegetable oil.

That’s because of how globalized the marketplace is for cooking oils and other products. “When there’s a supply chain issue or problem that happens in one place,” says Penfield, “it impacts the price for all the oils everywhere.”

Companies in India, which imports 23% of its sunflower oil, mostly from Ukraine, and China, which imports approximately 12% of its sunflower oil from Ukraine and Russia, may start turning to U.S. manufacturers of sunflower oil, driving up the raw materials price everywhere it is made. “You’re going to see price increases,” says John Sandbakken, the executive director of the National Sunflower Association nonprofit, “because there’s going to be more buyers looking to buy the same oil.”

Easing strains on the system won’t be as simple as growing more sunflowers in countries like the United States. The peak sunflower growing season in the U.S. begins in May, but the seeds can’t be harvested until September or October to then turn into oil. “The market will base all their decisions on what’s currently available in inventory now,” says Sandbakken. “There’s no way to speed it up.”

Nor is it easy for manufacturers changing to a different cooking oil for their products. Due to food safety and regulatory laws in many countries, switching to a more available oil would require snack companies to produce new packaging indicating the presence of whatever oil they swapped in. “We can’t switch overnight to using another vegetable oil,” says Thomas Lock, founder of the United Kingdom-based British Snack Co. “We would have to plan that sort of several months in advance and reprint packaging.”

Instead, Lock is anticipating paying the cost of the oil increases. Though consumers of chips—or crisps, as snackers in England call them—will eat those costs later on. “We’ll have to increase prices,” he says, “and the consumer will foot the bill at the end of the day.”

In Pennsylvania, Potter has a bit more flexibility in swapping in new oils. He already labels his chip bags to indicate they may contain multiple types of oils depending on raw material availability. But that doesn’t completely solve his scarcity issue. The pandemic-induced supply chain and logistics issues are still raging, meaning it’s not just sunflower oil that is currently in short supply.

Last week, Potter had to shut down the manufacturing line that uses cottonseed oil because a truck didn’t drop off a new load of the ingredient in time. Potter never used to run low on oils, but now it’s a regular occurrence. Normally, he would simply substitute sunflower oil to keep the products moving and avoid further delays. But as the Russia-Ukraine conflict puts an already scarce product in a more precarious state, Potter decided not to risk it.

“I didn’t want to take too much sunflower oil away,” Potter says, “because I might run out of that next week.” 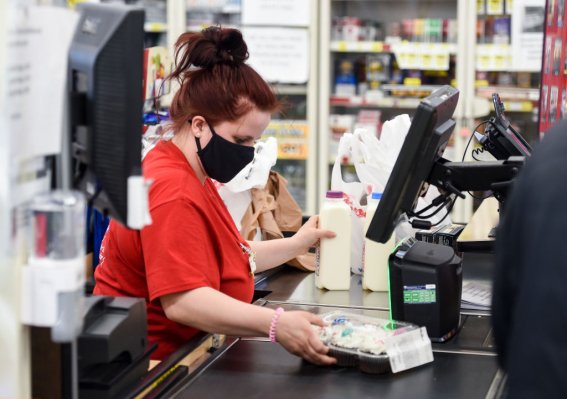 The War In Ukraine Is Going to Increase Your Grocery Bill
Next Up: Editor's Pick