How NATO Is Responding to Russia's Invasion of Ukraine

Members of the North Atlantic Treaty Organization (NATO) have met Russia’s invasion of Ukraine with outrage, deploying thousands of troops to Eastern Europe to protect their alliance members.

But while Russian forces launched a violent assault on Ukraine Thursday morning, NATO countries will not engage in warfare against Russia unless a member nation is attacked.

The decision to stay out of the conflict in Ukraine comes at a fraught time for NATO, as Ukraine has expressed a desire to join the military alliance but remains shut out in large part because of Russia’s fierce opposition to more eastward NATO expansion. So far, Russia’s wide-ranging attack on its neighbor country has been confined to Ukraine’s borders, hitting cities and bases with airstrikes or shelling, but several nearby NATO countries are on high alert and have formally asked other members to discuss whether the alliance should take collective action.

Here’s what you need to know about NATO’s role in the escalating tensions in Eastern Europe.

What was NATO’s response to Russia’s attack?

NATO Secretary-General Jens Stoltenberg called Russia’s moves “a brutal act of war” and affirmed Thursday morning that the military alliance would defend “every inch” of its territory should Russia attack a member country—an outcome military experts say is unlikely.

Despite the ongoing warfare and mounting casualties, NATO will not send any troops to Ukraine, instead bolstering its own eastern flank.

“We do not have any plans [to deploy] NATO troops to Ukraine,” Stoltenberg said at a press briefing on Feb. 24. “We have already increased and we are increasing the presence of NATO troops in the eastern part of the alliance on NATO territory.”

Hours after NATO announced its plans, U.S. President Joe Biden also confirmed he will not send any forces into Ukraine. The U.S. has about 90,000 troops already stationed in Europe, most of which are based in Germany, and will deploy an additional 7,000 troops to Germany this week.

“If [Russian President Vladimir Putin] did move into NATO countries, we will be involved,” Biden said Thursday afternoon. “The good news is NATO is more united and more determined than ever.”

But as Russian troops advanced in their invasion of Ukraine overnight, NATO announced on Feb. 25 that, for the first time in history, it would deploy parts of its combat-ready response force to Eastern Europe as a precautionary measure. NATO will continue to send weapons to Ukraine, including air defense, though it did not commit to sending troops to the nation.

Why isn’t Ukraine in NATO?

Several of Ukraine’s neighboring countries that were part of the Soviet Union have joined NATO in recent years. But deepening conflict between Ukraine and Russia has complicated Ukraine’s own wish to be included in the alliance.

In 2008, NATO announced that Ukraine and Georgia would become members if they met a series of criteria, such as the alliance’s standards for governance and transparency. Joining NATO became a top priority for Ukraine, but the nation’s bid for membership has made little progress. Some NATO members have cited Ukraine’s history of corruption as a source for the delay, while others say its transition to democracy in the mid-1990s is still shaky. Other NATO members are afraid that Russia will react aggressively if Ukraine joins the alliance.

Ukraine’s ambassador to Britain told BBC that the nation’s ambition to join NATO was met with threats and blackmail by Russia. But in 2019, Ukraine amended its constitution to include its goal of obtaining full membership in NATO, so the push will likely continue.

Although NATO hasn’t taken in Ukraine, it has helped defend the nation against Russian aggression before. In 2014, when Russia annexed Crimea and invaded eastern Ukraine, NATO responded by suspending cooperation with Russia and boosting Kyiv’s defensive capabilities. It held military trainings, deployed troops to the region, and funded cyberwarfare protections. But it did not join the fight militarily.

“We are told the door is open,” Ukraine President Volodymyr Zelensky said last week about the prospect of joining NATO. “But for now, no outsiders are allowed in.”

Although experts say an attack on NATO countries is currently unlikely, several member nations have called for security consultations to be held under Article 4 of the NATO treaty. Article 4 states that countries “will consult together whenever, in the opinion of any of them, the territorial integrity, political independence or security of any of the Parties is threatened.”

Consultation under Article 4 does not guarantee that any action will be taken, but it allows for swift talks. It has been invoked six times since the alliance was formed in 1949, most recently by Turkey in Feb. 2020, after dozens of Turkish soldiers were killed by Syrian government forces in opposition-held areas of north-western Syria.

At that time, member countries did not invoke Article 5, which outlines the alliance’s declaration that an attack against one member nation is considered an attack against all. Invoking Article 5 would mean all NATO countries vow to come together—most likely in warfare—if one member is attacked. It has only been invoked once, after the September 11, 2001 terrorist attacks. Invoking Article 5 would be a significant step representing a more concrete plan of action, even though NATO has already informally suggested it would defend its members if attacked.

“We will continue to do whatever is necessary to shield the alliance from aggression,” Stoltenberg said. “Our collective defense commitment [under] Article 5 is ironclad.”

What is Russia’s stance on NATO?

Russia’s ambivalence towards NATO expansion stems largely from post-Cold War tension between the West and Russia.

Created in 1949 as a bulwark against the former Soviet Union, NATO has since grown to 30 countries—many of which were part of the Soviet Union or its satellites. Although that bloc no longer exists, NATO’s growth across Europe and its expansion eastward is seen by Russia as a threat to its national security.

In essence, Russia believes NATO’s primary aim is to make Russia weaker. It views any expansion of NATO as a direct threat to its own interests, and Ukrainian membership would likely mean that the country is brought further from Russia’s sphere of influence. Putin claimed in 2005 that the “collapse of the Soviet Union was a major geopolitical disaster of the century.”

“As for the Russian nation, it became a genuine drama,” he said at an annual address to the Federal Assembly of the Russian Federation. “Tens of millions of our co-citizens and compatriots found themselves outside Russian territory. Moreover, the epidemic of disintegration infected Russia itself.” 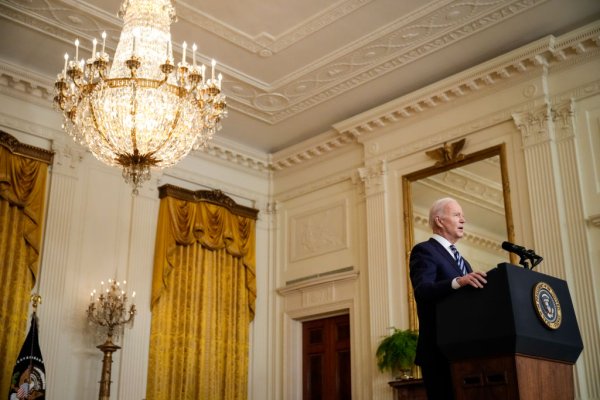