How Putin Is Losing at His Own Disinformation Game in Ukraine

As Russian troops closed in on Kyiv and battered the Ukrainian capital with missile strikes on Friday, rumors spread by Russian state media said that President Volodymyr Zelensky had fled the country.

That evening, as he has been doing for weeks, Zelensky sought to debunk the Russian disinformation narrative directly. In a defiant video posted on social media, he filmed himself by the Bankova, Ukraine’s equivalent to the White House, flanked by the prime minister and other top officials. “We’re all here. We are in Kyiv. We defend Ukraine,” he said. “Our military are here, our citizens and society are here. We are all here defending our independence, our state, and this is how it’s going to be.”

Amid the Russian invasion of their country, the Ukrainian government has treated the information battlefield as a real front line. In Ukrainian, English and Russian, top officials have relentlessly put out their own information on social media, provided regular updates, shot down rumors, and warned of what they say are new false Russian narratives before they can fully take off.

Citing intelligence, Ukraine’s foreign minister Dmytro Kuleba on Friday warned that Russia was planning “a massive false flag operation” to accuse Ukraine of human rights abuses. “Don’t trust fakes,” he tweeted. “Ukraine defends its land in a just and defensive war. Unlike Russia, we don’t target kindergartens and civilians.” The Defense Ministry has similarly tried to get ahead of rumors by releasing frequent updates on its operations.

These efforts to hamstring the Kremlin’s disinformation campaigns come as U.S. officials warn that Russia is ramping up efforts to target Ukrainian soldiers in order to “discourage them and induce surrender through disinformation” as Kyiv braces for attack. “Our information indicates Russia is creating a disinformation campaign by publicizing false reports about the widespread surrender of Ukrainian troops,” a U.S. official told TIME in a statement on Friday, adding that the intelligence also “indicates that Russia plans to threaten killing the family members of Ukrainian soldiers if they do not surrender.”

Russia, which has a long history of using this type of hybrid warfare to take a psychological toll, used a familiar playbook to sow confusion and doubt in the days before the invasion. These included disinformation campaigns mean to stir panic: in one case, Ukrainians received text messages on their phones alerting them that ATMs had stopped working, false claims that were quickly dispelled by Ukraine’s Cyber Police force.

This recalled a similar effort in 2014 when a mass text campaign targeted Ukrainian troops fighting pro-Russian separatists in the eastern part of the country with messages like “Leave and you will live,” “Nobody needs your kids to become orphans,” and “Ukrainian soldiers, they’ll find your bodies when the snow melts.” They were made to look like they were coming from fellow troops, with some claiming that their commanders had betrayed them, with the clear aim of intimidating and sapping morale.

This time around, encrypted messaging chats, which are decentralized and less constrained than social media platforms, have taken on a bigger role. Pro-Russian propaganda has especially been pushed out on Telegram channels, with much of it quickly showing up in a range of English-language rightwing groups. “Russian troops surrounded Kiev. Zelensky may have fled. Russia is fighting not against the Ukrainian peple and army but against Nazi battalions and foreign mercenaries,” read a message that was forwarded in dozens of U.S. right-wing Telegram channels on Friday.

“It’s incredible to watch modern-day information warfare evolving in real time,” says Cindy Otis, a disinformation researcher and former CIA analyst. It’s too early to tell how effectively the Ukrainian efforts to debunk Russian disinformation narratives are working, she says, noting that their success will depend on whether they’re breaking through to their intended audience.

The disinformation battle has been front and center to the White House’s own approach to the conflict from the beginning. Its unprecedented move to publicly release declassified intelligence about Russia’s plans frustrated the Kremlin’s attempts to establish an effective pre-fabricated narrative to invade Ukraine. “We shared declassified evidence about Russia’s plans and false pretext so that there could be no confusion or cover-up about what Putin’s doing,” Biden said on Thursday. “Putin is the aggressor. Putin chose this war.”

The disinformation war has now moved well past that initial stage, but continues apace. With Putin explicitly demanding regime change in Ukraine, calling on the country’s military to “take power into your own hands” and overthrow the government, the focus has shifted to tactical disinformation, says Otis. This includes “disinformation at the battlefield level aimed at intimidation and demoralizing the Ukrainian military and civilian population,” she tells TIME. “So false narratives about Ukrainian troops giving up, commanders abandoning their troops, claims of successes that didn’t actually occur.”

While Russia has honed this disinformation environment for decades, there are signs that there may be long-term consequences. On Thursday, Poland announced that it would ban the Russia Today network, following a similar move by Germany the previous week. French lawmakers have asked for RT’s license in the country to be revoked. Several other countries have imposed sanctions on the network’s editor-in-chief.

In the short term, the fight to shape perceptions of the fast-moving conflict seems more evenly matched than that being fought with military hardware, as compelling examples of resistance to the Russian invasion have galvanized sympathy and support for Ukraine. In one video that went viral in the first hours of the conflict, a Ukrainian woman berates a Russian soldier and tells him to put sunflower seeds in his pocket “so at least sunflowers will grow when you all lie down here.”

Sunflowers, a translation of the viral video informs, are the Ukrainian national flower. 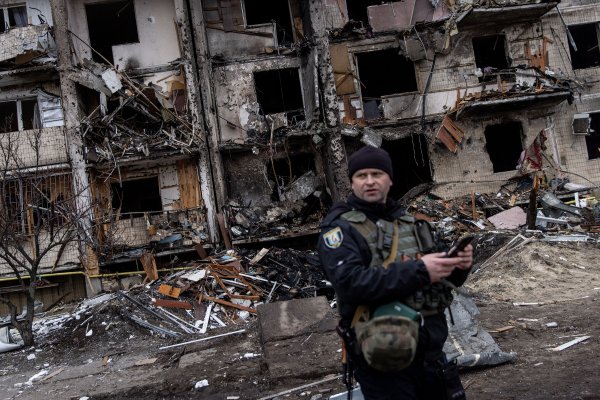 Even If Russia Wins, It Won't Do So Easily
Next Up: Editor's Pick