'The World is Doing Nothing.' A Myanmar Artist's Daring Mission to Tell the Story of His Father and Their Country's Suffering

The state minister’s residence in Taunggyi, formerly inhabited by Sai's father Linn Htut. "He didn’t have a life of his own, trapped inside his office and the residence," Sai says. "He’s trapped inside a COVID-19 infested prison now."
Sai ███
By Charlie Campbell / London

The state minister’s residence in Taunggyi, northern Myanmar, never felt like home for Sai. He found the cavernous rooms and hallways oppressive. The colonial-era edifice gave him “the creeps” long after his father Linn Htut, the chief minister of Shan state, was installed there in 2015, following Myanmar’s democratic reforms.

But as chaos engulfed the Southeast Asian nation in the wake of the February 2021 coup, Sai—a young artist and curator whose work is being exhibited at this year’s Venice Biennale—knew that Taunggyi was where he had to be. Linn Htut was being interrogated and tortured in a military jail. Sai’s mother was languishing in the official residence, under house arrest, with only her invalid mother-in-law for company. Some 20 guards were stationed outside.

Sai had been hiding in Myanmar’s biggest city, Yangon, where he was helping the democratic protest movement. Last May, however, he embarked on the perilous journey to Taunggyi, slipping through military checkpoints by huddling with elderly passengers in the backs of dilapidated vehicles. He brought a camera with him. To avoid arousing suspicion in case he should get stopped, he buried the camera in a suitcase beneath his wife’s underwear, exploiting the superstitious fear Burmese men have of touching women’s undergarments.

On arrival in Taunggyi, Sai sneaked inside the residence by hiding in a delivery vehicle and was reunited with his mother. They talked long into the night, making plans for every grim eventuality. “What are we’re going to do if my father dies? Or if my mother is killed, or I die?”

Read More: How to Hurt Myanmar’s Junta, According to Activists

Then he set to work: photographing the faded rooms and making family portraits using a piece of string—a traditional Burmese symbol for attachment—to represent his absent father. Linn Htut was a member of the ousted National League for Democracy (NLD) of Aung San Suu Kyi. Sai found his father’s NLD uniform and put it on while roaming the house. “I started to find traces of my father everywhere,” he says, “as I started to put myself in his shoes, in his suits, in his skin.”

When he got the images he wanted, Sai managed to return to Yangon and eventually fled with his wife to the U.K., with the University of London’s Goldsmiths college helping to arrange visas. On Mar. 15, the photographs and short video Sai made in Taunggyi go on exhibition at Goldsmiths, where Sai studied on a fellowship in 2019. Some of the images are reproduced here; in the credits, the artist has placed a symbolic black rectangle over his surname.

Speaking to TIME over coffee in the leafy north London suburb of Hampstead, Sai explains how he hopes his daring project will raise international awareness of the plight of his country and his father, who was sentenced to 16 years in jail on trumped up corruption charges Jan. 28.

“The military is trying to kill the country,” Sai says. “And the world is doing nothing.”

"In August 2020, father asked my help to take a photo of him for upcoming election on November 2020," says Sai. "Among a series of photographs, this one foretold the ominous future."
Sai ███

Myanmar’s Coup One Year On

Sai’s family catastrophe is mirrored all over Myanmar, a nation of 54 million formerly known as Burma. Last year, military chief General Min Aung Hlaing announced that he was assuming emergency powers in response to alleged voter fraud that election regulators and international observers had already demeed as baseless. The putsch unraveled the hard-won democratic reforms that led Suu Kyi to political victory in 2015, following the freest elections in over two decades.

More than 1,500 civilians, including at least 44 children, have since been killed by security forces, while at least 9,100 people have been detained. Over 320,000 civilians were newly uprooted by the end of 2021, on top of the 340,000 people already displaced by fighting prior to the coup, mostly in ethnic areas. Meanwhile, a series of nationwide strikes has seen public services like education and healthcare grind to a near halt.

In a statement to mark the one-year anniversary of the coup, U.S. President Joe Biden vowed to “impose further costs on the military and its supporters.” Yet the international response has been limp.

Although many Western firms—including oil giants Total and Chevron—have pulled out of Myanmar in response to abuses, the U.N. Security Council has not gone beyond issuing statements of concern.

Russia continues to sell arms to the junta. India, historically close to Myanmar, has not spoken out forcefully on the crisis in fear of pushing the junta closer to China, which is Myanmar’s largest trading partner. Beijing refuses to become involved. “The military is a thug but there is someone behind it, and that is the [Chinese Communist Party],” Sai says. “Why does the CCP want Myanmar to be in this kind of situation? Because then it will be the sole [patron] of Myanmar.”

Preoccupation with the COVID-19 pandemic has meanwhile distanced the world even further from a nation that few held deep ties with, owing to sanctions and Myanmar’s decades of isolation. Compounding matters, Suu Kyi—a former human rights icon, who spent a total of 15 years under house arrest—faced international opprobrium for appearing at the international court of justice in the Hague in 2019 to defend Myanmar’s military for its brutal pogroms against the Rohingya Muslim minority.

Read More: A Leading Myanmar Activist Talks About Her Fight

Suu Kyi rejected U.N. claims that the military’s campaign of arson, rape and murder was carried out with genocidal intent. The military did not repay the favor, instead sentencing her to six years on bogus graft charges, with more charges pending.

Sai’s father never aspired to a political career. He was in training as a dentist when the 1988 student uprising ousted the regime of dictator Ne Win. Linn Htut’s classmate was Maung Thura, who under the stage name Zarganar became Myanmar’s best known comedian, repeatedly jailed by a regime he mercilessly lampooned. The two undergraduates would frequently appear in vaudeville skits together. “Zarganar’s nickname was Tweezers, while my dad’s was Pliers,” Sai laughs.

Elections called for 1990 were won by Suu Kyi and the NLD, but when the military refused to recognize the results, Sai’s father followed many student protesters in fleeing to Myanmar’s remote border regions. He met Sai’s mother in the northern Shan city of Lasho and settled, working as a dentist. “We often had no money because he was always undercharging people,” Sai remembers with a shake of the head.

The NLD persuaded Linn Htut run for office in the 2015 elections. As a member of the majority Bamar ethnicity—albeit with a Shan wife—he overcame generations of ingrained suspicion in his adopted state to win the vote, and was reelected in 2020. “He is the kind of man who, if he accidentally pocketed a friend’s pen, wouldn’t be able to sleep until he’d returned it to them,” says Sai.

Sai has inherited his father’s reformist courage. After returning from Taunggyi to his Yangon safehouse, he helped protesters by building make-shift riot shields from sheets of corrugated plastic and tubing, and disseminating guides on counter-surveillance and treating tear gas injuries. He also worked on subversive art that cast light on the military’s vast network of business interests. In one piece on display in Bangkok, Sai plastered a military uniform with the logos of firms controlled by army.

"Mom is hoping dad will be released soon. We are honest people, and we will always hold on to our dignity even if we don’t have anything else."
Sai ███

Meanwhile, the country lapsed into open warfare. The remnants of the ousted NLD administration formed a National Unity Government, which gave its backing to a ragtag military wing, the People’s Defense Force. The militia is waging a guerrilla campaign against the Burmese military, in collaboration with some of the ethnic rebel armies that have for decades agitated against central rule in what was already the world’s longest-running civil war.

The junta says elections will be held in mid-2023 but few believe it. In any case, a convoluted new electoral system is being rolled out to prevent the emergence of any dominant party. The military will remain kingmaker owing to its constitutionally reserved bloc of a quarter of all parliamentary seats.

Read More: Why I Feel Hopeful About Myanmar After Decades of Darkness

“With neither side in a position to deliver a decisive blow to the other, a protracted and increasingly violent confrontation appears inevitable,” writes Richard Horsey, senior adviser on Myanmar for the International Crisis Group, in a briefing note. “Caught in the middle will be ordinary citizens, who are already paying a terrible price.”

Sai is currently following events from afar—but he may not be away for much longer. His and his wife’s visas run out in May The couple would be eligible to claim asylum, but are reluctant to do so because of restrictions such as being prevented from working for two years. They are now pondering a return to Myanmar to offer what help they can to a people the world has turned its back on. 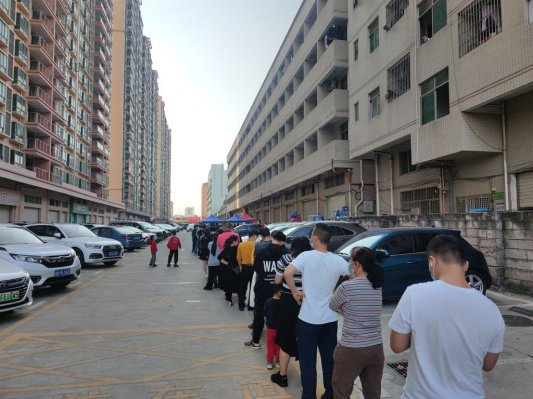 China Locks Down Shenzhen as COVID-19 Cases Jump
Next Up: Editor's Pick