‘I Can Get Killed.’ A Leading Activist Talks About Her Role in the Fight Against Myanmar's Junta

After the Myanmar military detained civilian leader Aung San Suu Kyi and ousted her elected government in the Feb. 1 coup, democracy activist Thinzar Shunlei Yi threw herself into the protest movement that took root across the country.

The 29-year-old had moved from one secret location to another just an hour before a video call with TIME in mid-March. Changing locations is something she and her fellow activists do every two to three weeks, Thinzar Shunlei Yi says, sitting against a white wall with curtains drawn.

“Nowhere is safe in the country right now. Nobody is safe. Even though I’m staying in my safe house, actually I’m not safe. I don’t feel safe at all.”

Security forces have intensified their violent crackdown on anti-coup protesters. At least 261 people have been killed since the military takeover, according to the Assistance Association for Political Prisoners, a human rights organization based in Thailand that tracks political imprisonments and deaths in Myanmar. The death toll continues to rise daily and police and soldiers have taken to targeting protesters in night-time raids.

“It’s clearly a daily slaughter of the peaceful protesters,” says Thinzar Shunlei Yi, who is now one of the most prominent figures in the resistance against the military junta—a rebellion that is starting to be known locally as the Spring Revolution.

The leaderless movement began with calls for the release of Aung San Suu Kyi and the restoration of the civilian government led by her party, the National League for Democracy, which won a landslide general election last November. But demonstrators are now demanding broader changes, beginning with the abolition of a 2008 constitution drafted by the military that allowed the generals to retain effective control.

Read more: How the Protests Are Giving a Voice to Myanmar’s LGBTQ+ Community

“The protesters are not just organizing anti-coup protests any more because we are now … doing a revolution, a revolution against the political system and cultural system in the country,” Thinzar Shunlei Yi says.

Even though she is in hiding, and fully aware of the risks she is taking by talking to international media, she isn’t afraid to speak up using her real name.

“I’m not nobody. I’m not anonymous,” she says. “I am a true person living inside the country saying things under my name, risking everything.”

She has spent a decade in youth advocacy groups, campaigning against the military’s power, and was an inaugural member of the U.S. Ambassador’s Youth Council in Myanmar. For the past three years, she hosted a debating show, Under 30 Dialogue, for young people on Mizzima. The popular independent TV channel and four other media companies recently had their licenses revoked by the military.

Since the coup, Thinzar Shunlei Yi has been coordinating with other young activists, bridging different groups, as well as taking to the streets to lead protests despite the military’s heavy use of force.

“It’s not like we’re not aware of what will come to us,” she says. “I can get killed. I can get arrested. I can get beaten up so bad but… we are protesting against them, knowing everything, because we have no choice.” 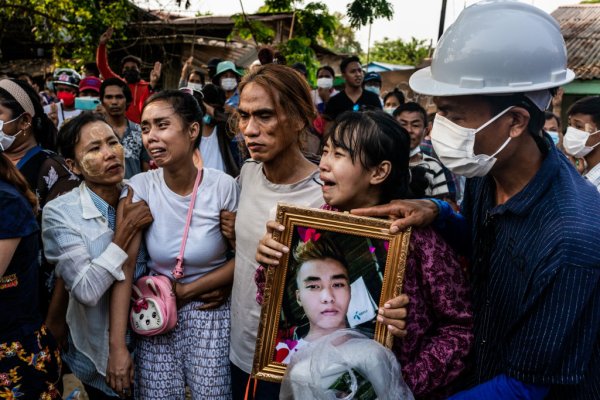 Rights Activist Documents Horror in Myanmar
Next Up: Editor's Pick