As the de facto leader of Myanmar’s “hybrid democracy,” Aung San Suu Kyi may still have to share power with the military, but the Nobel laureate has largely shouldered international outrage over her country’s Rohingya crisis alone. With global backlash so squarely focused on Aung San Suu Kyi, Myanmar’s military has continued unleashing its ferocious — and domestically popular — campaign unchecked. In just two months, the military has spawned the world’s fastest-growing refugee crisis. But as the number of traumatized, bereft, and hungry refugees fleeing into Bangladesh increases by the day, already exceeding 607,000 people since August 25, the world’s attention is starting to shift toward the real architect of the atrocities.

Senior General Min Aung Hlaing occupies the highest office of Myanmar’s military, known locally as the Tatmadaw. The 61-year-old may not have the public profile of Aung San Suu Kyi, but the world is beginning to recognize that he calls the shots when it comes to the military’s crackdown on the Rohingya.

On Oct. 26, U.S. Secretary of State Rex Tillerson spoke to Min Aung Hlaing, urging him to stop the violence and allow Rohingya to return. The U.N. says the Rohingya exodus amounts to “ethnic cleansing.” But Min Aung Hlaing says the world has unfairly judged his solution to Myanmar’s “final problem.”

Here are four things to know about Myanmar’s latest strongman:

Min Aung Hlaing’s extensive public engagements are dutifully chronicled for the 1.3 million followers of his verified Facebook page, but his biography is thin on personal details. He was named commander-in-chief on March 30, 2011, taking over amid a transfer to a quasi-civilian government following nearly 50 years of direct military rule. Tatmadaw experts say the democratic transition was from the outset a top-down affair, designed to appease protesters agitating for democracy while retaining the military’s grip on power.

According to a former classmate cited by Reuters, Min Aung Hlaing was an unremarkable cadet, one who had been admitted to the elite Defense Services Academy on his third attempt. Nevertheless, he was regularly promoted. Min Aung Hlaing spent most of his army career fighting rebels on Myanmar’s eastern border in conflicts notorious for the abuse of ethnic minorities, advocacy groups say. In 2009, Min Aung Hlaing oversaw military operations along the Myanmar-China border to oust a regional strongman, Peng Jiasheng. The Kokang incident spanned just one week, but was as efficient as it was brief: violating a 20-year-long ceasefire, driving 30,000 refugees into China and, critically, dislodging an ethnic armed group from frontier territory perfectly positioned to become a key trade route.

Western governments initially greeted the new commander-in-chief with enthusiasm, likening him to a statesman, thanks to his charisma and clear articulation of a political vision. Any hopes that Min Aung Hlaing would ease the Tatmadaw back into the barracks quickly faded as the general expressed the need for continued military involvement in Myanmar’s politics. In 2015, a few months before nationwide elections that propelled Suu Kyi to some semblance of power, he told the BBC he had no timeline for full civilian rule: “It could be five years or it could be 10 years, I couldn’t say.”

The Extent of His Powers

In 2008, a new constitution enshrined the Tatmadaw’s influence and autonomy, while countenancing a civilian government and opposition figures like Aung San Suu Kyi. Despite the democratic window-dressing, the new charter cemented the powers of the “Supreme Commander of all armed forces,” allowing him to set his own agenda, appoint his own people and act as the final arbiter of military affairs. In other words, he is answerable to no one.

The commander-in-chief holds the keys to just three ministries — defense, border affairs and home affairs — but their reach is pervasive. While the civilian administration can enact legislation, the commander-in-chief exercises complete authority over the enforcement, from the police, to the border guards, to the General Administration Department. The military chief also appoints one-quarter of all parliamentary seats, virtually guaranteeing a veto over any changes to the constitution, which requires 75% approval. And, should the democratic experiment go astray, the commander-in-chief can reel it back any time via the vaguely worded “coup” clause: a democratic kill switch granting the military the “right to take over and exercise State sovereign power.”

The hybrid governing style is matched by a hybrid economy. The military runs two big holding companies: Union of Myanmar Economic Holdings Ltd. and Myanmar Economic Corporation. Ostensibly, these conglomerates fund the military pension system, but their accounts are beyond public scrutiny and the operators hold functional monopolies over several key sectors, like beer and tobacco sales. According to watchdog groups, the accounts have become flush through the plunder of natural resources such as gems, fossil fuels and timber.

The General and the Lady

Suu Kyi, who long fought the generals as leader of the country’s main opposition party, was allowed back into public life in 2010 after 15 years of house arrest. Her involvement in the 2012 by-elections and the 2015 general elections helped legitimize the Tatmadaw-led democratic transition. Unable to change the constitution without the military’s approval, Suu Kyi settled for co-ruling with her former captors.

In 2016, Min Aung Hlaing became the first Tatmadaw chief in decades to attend Martyrs’ Day alongside Suu Kyi. His appearance was widely interpreted as a sign of growing collegiality between the military and Aung San Suu Kyi and her civilian government. After the ceremony, which commemorates independence heroes including Suu Kyi’s father, Min Aung Hlaing exchanged his uniform for Burmese civilian attire and took part in a Buddhist donation at Suu Kyi’s lakeside home.

Some Myanmar watchers say that the Rohingya crisis has strained the relationship between Suu Kyi and Min Aung Hlaing. But the Nobel laureate has insisted that she and her government “stood firm” with the military and its chief. Suu Kyi seeks to maintain “a basic equilibrium” in the current political order, says Renaud Egreteau, a political scientist and author of Caretaking Democratization: The Military and Political Change in Myanmar. That means, says Egreteau, she is avoiding anything that could shatter the status quo, such as “breaking with the widely shared consensus on the Rohingya issue.”

Despite Myanmar’s brutal treatment of the Rohingya over many years, Min Aung Hlaing is no pariah on the world stage. His trips overseas began with a pilgrimage to Beijing soon after he succeeded junta sumpremo Than Shwe. Since then he has been in the company of ambassadors and representatives from the U.S., the E.U. and New Zealand. Leaders from Japan and India have wined and dined the commander and his entourage, while Austrian defense officials welcomed the military chief with an honor guard in April this year, according to the Diplomat.

The latest Rohingya exodus has elicited tough language from the international community. “The world can’t just stand idly by and be witness to the atrocities,” said Tillerson on Oct. 26. But the fallout has so far resulted in little more than some government’s halting military exchanges and withdrawing overseas invitations to military leaders. Senators, led by John McCain and Ben Cardin, this week also proposed whittling down engagement with the military and reinstating some of the sanctions that were lifted last year, such as a ban on jade and ruby imports.

Beyond some sanctions, little action has been taken toward accountability. Rights groups have called on the U.N. Security Council for a resolution that would refer recent allegations to the International Criminal Court. Mark Farmaner, a long-time Myanmar watcher and director of Burma Campaign U.K., says the lack of international action over the crisis has essentially given Min Aung Hlaing a green light for murder. “You have to hand it to Min Aung Hlaing,” Farmaner tells TIME, “he is a very smart guy to have correctly calculated that he could commit ethnic cleansing and get away with it.” 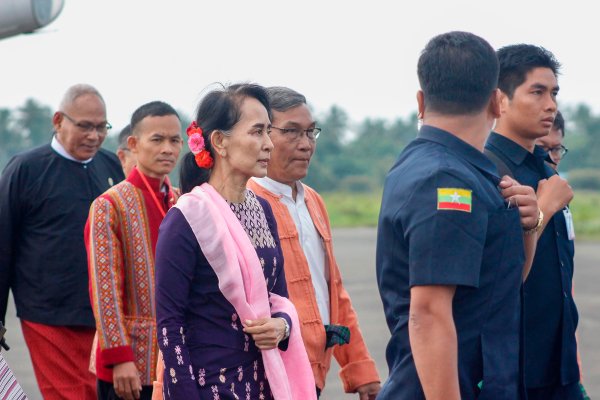