Revolutions Are Built on Hope. That's Why I Believe Myanmar's Protesters Will Succeed

Ideas
By MiMi Aye
Aye is the author of award-winning cookery book Mandalay: Recipes & Tales from a Burmese Kitchen. She was born and brought up in the U.K. by Burmese parents, but regularly visits friends and family back in Burma. Aye also hosts the food and culture podcast The MSG Pod.

Something I rarely talk about is that to be Burmese is to be afraid. It’s a low-level, visceral feeling most of the time, but sometimes it can be overwhelming. Because all the worst things you can imagine that could happen to you or your loved ones have happened, to you or to people you know, because of the Tatmadaw, as Myanmar’s military is known. There’s a reason Aung San Suu Kyi’s most famous book was called Freedom from Fear.

I grew up in the U.K., but my second home was in Myanmar, where my family remains. In a country ruled by dictators since 1962, I witnessed decades of gaslighting and fear piped into people’s minds and homes, from our newspapers to our TV to the billboards around town with bilingual slogans like “The Tatmadaw is your Mother and Father,” “The Tatmadaw and the People in Eternal Unity—Anyone Attempting to Divide Them is Our Enemy.”

Not only was mass media tightly controlled, but the few phones that existed were tapped, our letters were redacted, and the postal service so untrustworthy that we used a system called lugyone: asking others, often strangers, to ferry items in their own luggage.

While we put our faith in complete strangers, at the same time we could trust no-one, because of Tatmadaw informers (known as dalan). A standard conversation would be: “Go take this tiffin to that Aunty next door, but don’t badmouth the junta, because she might also be a dalan.” Literally anyone could be an informer.

People weren’t allowed to gather on the streets. Some disappeared in the middle of the night. Once, when I was staying with a cousin in Yangon, I had to hide in her wardrobe as junta inspectors came to the door because I wasn’t listed as a resident. My dad grew up without his father, who was a political prisoner, and was forced to hide in a jungle camp as a child. An uncle died in 2012 as a result of conditions he’d suffered in jail. My mum’s cousin was murdered in a “burglary” where nothing was taken.

My parents left Myanmar in 1979 because they were sick of dawn raids at gunpoint by the Tatmadaw looking for evidence of sedition and they were tired of living in fear. Before they left, the junta forced them to sign a bond saying that they and their children would never speak out against them, to guarantee the safety of their family that remained in the country and the privilege of being allowed to return. When we did go back, we were shadowed by the “MI” (plain clothes military intelligence), each trip home a bizarre mix of joy and anxiety.

In 1988, when I was 9 years old, the Tatmadaw slaughtered thousands of people during the 8888 Uprising. And my parents told me that we could say and do nothing in public, because otherwise our family would be killed too.

I did not grow up under a military dictatorship, but the rest of my family did. And right now, I’m getting horrendous déjà vu.

The civilian government that finally came to power in 2010 was sadly no more than democracy on a leash, thanks to the 2008 constitution stacked in favour of the Tatmadaw and passed in the wake of Cyclone Nargis. Even so it gave Myanmar enough of a veneer of respectability for multinational businesses like KFC and Coca Cola to come rolling in. But censorship remained the norm, people were still being arrested as dissidents, and many of us were waiting for the other shoe to drop.

Since the Tatmadaw staged a coup on Feb. 1, nearly 600 people have been murdered by the military (and the police who are working with them), including over 40 children. Most of the adults were peaceful protestors, but some were complete bystanders—one, a single mother, had been on her way to the shops. Thousands of others, including over 100 celebrities, have been arrested for breaking the ridiculously oppressive provisions of the Penal Code which criminalize, for example, publishing or circulating “any statement, rumor or report with intent to cause, or which is likely to cause fear or alarm to the public or to any section of the public whereby any person may be induced to commit an offense against the State or against the public tranquility.” People are even being taken away for no reason at all; many return after having been beaten or tortured, and some are returning in body bags.

I keep thinking about that old joke that George Orwell actually wrote two novels about Myanmar: his colonial police memoir Burmese Days and 1984.

However, although I agree with the writer Ye Yint Aung that “watching your home country implode from afar is truly heartbreaking,” this time, there is palpable hope. What has finally broken the dam of fear for me and for so many others, and why we are fighting so hard to support the revolution, is seeing a real chance for freedom. There is a genuine desire for unity at a grassroots level—a new, federal democracy built by those who want the best for the more than 130 ethnic groups that make up Myanmar, and who have learned from past mistakes.

Crowds cheer as they gather for the election result announcement in front of the National League for Democracy's headquarters after Myanmar's election on November 9, 2015 in Yangon, Myanmar.
Lauren DeCicca—Getty Images

This includes bringing the Tatmadaw to justice for their crimes against the Rohingya, who are finally being openly embraced as our siblings after years of cruel misinformation and propaganda. (Those who had dared to speak up for the Rohingya in the past were branded as “enemies of the State” and many were imprisoned or worse.)

Every day, we’re seeing all ethnic groups (including the Rohingya), all religions, all professions and industries (spearheaded by medics in a White Coat Revolution), and even punks and drag queens marching together and waving the three-finger salute to show support for the Civil Disobedience Movement—a nationwide, decentralized and incredibly creative initiative intended to shut down the country, and thus the Tatmadaw’s activities, using peaceful means.

This unprecedented unity of protest and federal goals is partly thanks to the Internet. Demos are being organized, and messages, images and hashtags are being spread via Facebook, Twitter and Instagram. In 1988, camera films had to be smuggled out of Burma, as Myanmar was then known, before the world could see the streets bathed with blood. In 2021, we’re watching events unfold in real time, and those of us outside the country have been able to support the movement in ways that were previously impossible. The Committee Representing the Pyidaungsu Hluttaw (CRPH), composed of ousted lawmakers who are in hiding, has even been attempting to govern in parallel with the junta by issuing parliamentary decrees via Facebook.

And this is why the Tatmadaw has tried its best to plunge Myanmar into darkness —blocking access to Facebook, cutting mobile Internet for 53 days now (WiFi is rare even in normal circumstances), and shutting down all Internet from 1 a.m. to 9 a.m. every day. But people have turned to VPNs and mesh networks, and so news in Myanmar is still getting out to the world and, more importantly, to each other. A one-page print newsletter has even been launched—The Voice of Spring—providing information to those who would otherwise be cut off completely.

One slogan of the Civil Disobedience Movement is “You Messed with the Wrong Generation” and this feels like a truth. Whenever the Tatmadaw strikes, the people rise again like the traditional Burmese balance doll, the Pyit Tine Htaung, another symbol of the movement. The Tatmadaw is a twisted and archaic Goliath and, despite their lack of firepower I do believe that this time the Burmese people—who, like David, are literally armed with catapults—will win and topple the dictatorship once and for all.

As diplomat U Kyaw Moe Tun said recently at the U.N. General Assembly (angering the junta, which immediately fired him and charged him with High Treason): “The revolution must succeed.” 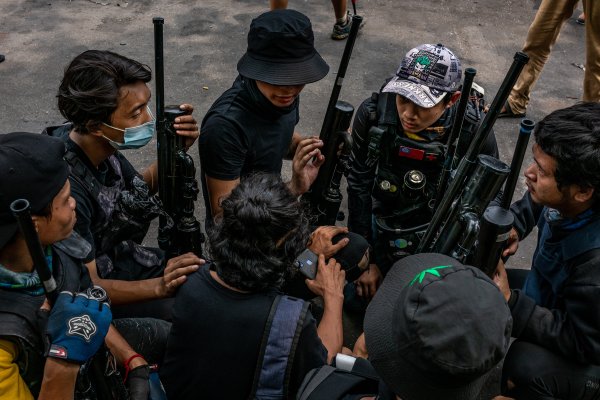