David Miliband: How to Bring Peace to the World’s Longest Civil War

Myanmar refugees look at smoke from gunfire fights between Myanmar's government troops and rebel militias at a refugee campsite in Manghai town in southwest China, on Nov. 22, 2016.
Xie Kunagshi—EPA
Ideas
By David Miliband
David Miliband is the President and CEO of the International Rescue Committee. He is the author of the book Rescue: Refugees and the Political Crisis of Our Time. From 2007 to 2010, he was the Secretary of State for Foreign Affairs of the United Kingdom.

Sixty years into the world’s longest civil war, the transition to peaceful democracy in Myanmar remains elusive. The U.N. recently reported that up to 30,000 Muslims had fled their homes amid reignited violence in Myanmar’s Rakhine state. It is the latest and largest exodus since the bitter sectarian conflict in 2012 that left scores dead and pushed over 120,000 into camps, where they remain today.

Long considered a pariah state under the rule of a military junta, Myanmar has seen remarkable political progress. It has been one year since the country’s first openly contested elections—accompanied by a sweeping reform and national reconciliation agenda with the country’s 15 ethnic armed groups and 135 recognized ethnic minorities—won by Nobel Laureate and human rights icon Aung San Suu Kyi, elevating hopes for a new and strategic democratic partner in Asia. But the threat posed by the country’s persistent humanitarian and political challenges remains significant; support is needed now for Myanmar to remain a beacon of hope in the region.

The cauldron of decades-old ethnic strife has been boiling in Myanmar in recent weeks across Northern Shan, Rakhine, Karen and Kachin, adding to the one million already in need of urgent humanitarian assistance across the country. Aid to Rakhine—already one of Myanmar’s poorest states—has been suspended for over a month at the time of writing, where reliance thereon is already near-absolute as Muslim communities continue to face severe restrictions on their rights, only exacerbating an already critical humanitarian crisis.

A comprehensive peace process is indispensable to an inclusive, stronger union for all of Myanmar’s constituents, and consistent diplomatic engagement is necessary—which includes the recently-formed Advisory Commission on Rakhine led by Kofi Annan. But the urgent alleviation of the country’s humanitarian challenges is equally indispensable for a durable peace—and the international community has a strong role to play. Three points are vital.

First, Myanmar urgently needs a boost in immediate assistance to meet humanitarian need across communities and across conflict-affected areas. With a rosier political outlook, donors have indeed been quick to declare success in Myanmar, and much-needed—and already scarce—funding has dried up as a result. Despite ongoing waves of displacement across the country, the U.N. appeal is critically underfunded, a request of a mere $191 million just over halfway met. More aid is indispensable to meeting Myanmar’s growing and long-standing humanitarian need, additionally boosting much-needed economic development in restive states.

Myanmar also is in need of long-term and flexible approaches—not just quick fixes—to address both peaks in humanitarian need and much-needed development. The International Rescue Committee’s Project for Local Empowerment is such an example. For the past five years, the program has been working through a network of 37 ethnically-led, community-based organizations to provide cash, food, protection, health and education relief to 500,000 conflict-affected people on both sides of the Thailand-Myanmar border. Most important, the PLE brings ethnic service providers together with their government counterparts in order to pave a peaceful path for longer-term development, weaving the fabric of increased and comprehensive services for all of Myanmar’s constituents.

Second, greater, more strategic aid is only as good as whom it reaches. As the conflict between the Burmese military and ethnic armed groups across the country reignites, access remains severely restricted to humanitarian actors, aggravating critical need and putting ongoing relief efforts at risk. All parties to conflict in Myanmar and across its conflict-affected states—in accordance with international humanitarian law—must allow full, immediate and unimpeded delivery of impartial assistance for civilians, preventing a deterioration in humanitarian conditions and a continued strain on durable peace.

The safe and comprehensive reintegration of Myanmar’s future constituents is the third critical factor. Myanmar’s one million refugees and internally-displaced persons—who derive principally from the country’s minority population—have yet to be convinced that the political environment and their prospects for the future have changed. A significant improvement in the rights, protections and services afforded to all of Myanmar’s citizens is the pull factor that will bring them home; conversely, a premature return process not preceded by serious change in these domains will only further fracture the state. The Burmese government, its neighbors and international actors must work together to ensure that returns are safe, voluntary and informed, and preceded by a concerted boost in the reach and scale of basic services and job opportunities back home.

Meeting humanitarian need is as much an end in itself as a strategic imperative in Myanmar. The challenges before one of Asia’s newest democracies are many, pressing and daunting. But the true success of Myanmar’s democratic quest hinges on the resolution of its protracted displacement crisis and persistent humanitarian challenges, themselves an expression of the pivotal need to provide full and equal rights, protections and services to the country’s constituents regardless of ethnicity, religion or gender. Only then can the promise of a prosperous, inclusive democracy in Myanmar—and an end to the world’s longest civil war—finally rise from rhetoric to reality. 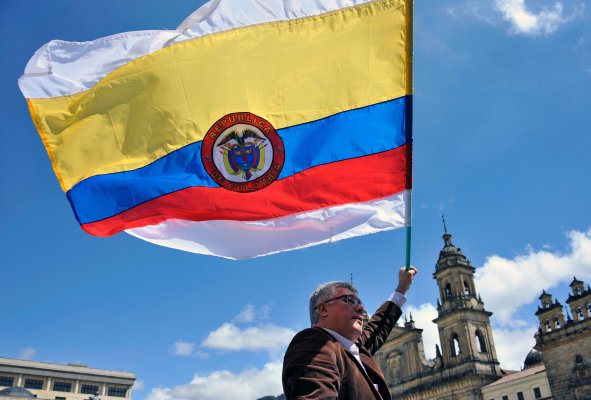 Colombia Signed a New Peace Agreement. Will It Stick?
Next Up: Editor's Pick