The More Bonkers Search Party Got, the More Authentically It Captured Millennial Adulthood

Warning: This piece contains spoilers about Search Party season 5—including the series finale.

In the beginning, Search Party was a TBS comedy that plunged four millennial Brooklynites into a sort of Nancy Drew mystery. As protagonist Dory Sief, Alia Shawkat embodied the aimlessness of grads who’d entered the job market amid the Great Recession, trodding career paths that led only to dead ends. When a college acquaintance, Chantal (Claire McNulty), went missing, Dory—with the reluctant help of her boyfriend Drew (John Reynolds) and best pals Elliott (John Early) and Portia (Meredith Hagner)—turned amateur sleuth to satisfy her thirst for meaning and recognition. With its awkward humor, narcissistic characters and hipster-realist aesthetic, the show felt like a more self-aware successor to Lena Dunham’s Girls.

But by its fifth and final season, which dropped in full on HBO Max on Jan. 7, Search Party had gone utterly bonkers. No longer either a detective story, a post-collegiate comedy of manners or at all realistic, it follows an allegedly enlightened Dory in the aftermath of her death—all 37 seconds of it—as she escapes from a mental institution and embarks on a quest to share her new-found love and light with humanity. “How can we all die?” she asks, unaware that she’s about to get a very literal answer. Megarich futurist Tunnel Quinn (Jeff Goldblum, playing an unctuous hybrid of Elon Musk, Elizabeth Holmes and Willy Wonka) proposes they create nirvana in pill form and recruits a gaggle of influencers to prematurely sell the product. Meanwhile, John Waters sells Elliott and his masochistic mate Marc (Jeffery Self) a genetically engineered 9-year-old son who turns out to be homicidal. It all ends in a zombie apocalypse that reduces the population of New York City to 13,000. The craziest thing about this transformation is that, speaking as part of the generation it depicts, the show resonates even more deeply in its later, weirder seasons than it did at first.

The ramp-up from Brooklyn noir to surreal sci-fi was gradual. Two major twists at the end of season 1 set up the dark hilarity to come: Dory and Drew accidentally kill the guy she’s been having an affair with, and Chantal turns out to be safe, self-absorbed and hiding in Montreal after deciding to “ghost” the people in her life. As wild as the plot gets from there, it’s all in service of the revelations brought about by those events. One is that it’s not just the central foursome, or even just spoiled millennials, who are awful; virtually everyone we meet turns out to be terrible, from a predatory politician played by Succession’s J. Smith-Cameron to a prosecutor (Michaela Watkins) whose fatal flaw is her all-consuming hatred of spoiled millennials. The other law of Search Party’s universe is that Dory is capable of changing the world—but only for the worse. (And boy does she.) As God herself once sang: Isn’t it ironic?

In the first three seasons, showrunners Charles Rogers and Sarah-Violet Bliss, who co-created the series with alt-comedy star turned director Michael Showalter, exhausted the crime storyline. As Dory devolved from inadvertent killer to purposeful murderer to defendant in a trial that made her a celebrity, complete with obsessive stans and vocal haters, the show’s metaphors changed. Nancy Drew gave way to Hitchcockian psychological thriller with undertones of Crime and Punishment. In an interview with the A.V. Club, Rogers and Bliss cited John Grisham movies, the Amanda Knox case, The Bling Ring, Gus Van Sant’s 1995 black comedy To Die For and true-crime docs like The Staircase as influences on a third season that saw Dory acquitted, only to wind up in the clutches of deranged stalker Chip Wreck, a.k.a. “The Twink” (Cole Escola).

That’s when Roger and Bliss really started going for broke. Season 4 sent each character on their own bizarre journey. Elliott becomes a right-wing TV pundit. Drew moves out of the city and starts working at a theme park, where he dates a woman who plays a sort of off-brand Disney princess. Portia is cast as Dory in a sleazy docudrama called Savage: The Dory Sief Story (opposite Busy Philipps, one of many great guest stars, who plays Portia). And Dory remained captive in a replica of her apartment that Chip built in the basement of his family home, plotting her escape, developing Stockholm Syndrome and, with her newly shaved head, bearing a strange resemblance to the eponymous saint from the silent cinema classic The Passion of Joan of Arc.

This would’ve been the season when most shows, unmoored from their original premise, would’ve gone off the rails. Instead, it was all kind of exhilarating—even a twist finale that found Dory, who’d just presumably perished in a fire, observing her own funeral. Search Party hadn’t jumped the shark so much as it had blossomed into the incredibly strange existential comedy it was always meant to be.

The metamorphosis worked for a number of reasons. On the level of storytelling, the central characters—incapable as they were of any actual growth—stayed remarkably consistent, retaining their young-Brooklynite insecurities even amid the cultists, mad scientists and zombies of season 5 (see: the running gag in which Elliott is jealous of Drew and Portia’s free-loving sexual relationships with Dory). Drew is a coward, always eager to blame his problems on someone else, if not run away from them entirely. So impressionable and desperate for affection is Portia (who is also so ill-suited to her Shakespearean name that it becomes a joke in itself) that she habitually follows false messiahs, the last of whom turns out to be Dory. Elliott’s personality is a tug-of-war between narcissism and sociopathy.

And then there’s Dory, who shapeshifts so often, in the course of her ultimately fruitless quest for meaning, that flux itself becomes the constant fact of her life. She’s the archetypal hungry ghost—driven by emotional and spiritual emptiness to wander the earth in search of validation that will never come. (No wonder she survives the apocalypse.) In another of the show’s great ironies, Dory is, at least in theory, a better person than her friends by virtue of her compulsion to do something positive with her life. Yet it’s her directionless ambition that renders her more dangerous than any of them. Throughout all five seasons, her real doppelganger is Chantal, a rich girl who so thoroughly buys in to the indulgent philosophies of empowerment feminism and self-care that at one point she endeavors to improve society by founding a luxury retreat for women with broken hearts. This parallel pays off hilariously when she and Dory reunite in the series finale and each keeps insisting to the other that “the world is ending because of me.”

There’s more going on here than just clever comedy writing, though. In its journey from realism to absurdity, Search Party captured something that an Obama-era show like Girls—which, like its predecessor Sex and the City, quickly aged into triviality—never could. When it premiered, a few weeks after the 2016 election, daily life for so many who grew up in the relatively stable, prosperous ’90s felt tenuous, unremunerative, often degrading and perhaps devoid of overarching meaning. Would we ever be able to settle down, buy a house, find time in our overworked, underpaid existences to chase those big dreams our parents always said we could achieve, or would we just have to content ourselves with perpetual adolescence? Who knew?

Then suddenly (albeit not quite as suddenly as the more privileged among us seemed to think), the world we were so desperate to change started changing in ways we hadn’t anticipated. The Trump presidency, widespread awareness that catastrophic climate change was becoming inevitable, COVID and dozens of smaller crises hit us in rapid succession. The chaos that reigned outside our front doors started to drown out our own internal flux. We were the same flawed people, but the backdrop to our little generational psychodramas just kept getting weirder. The Search Party finale was certainly pessimistic, but, well, how are you feeling two years into the pandemic? We are all disciples of Dory Sief now, making our traumatized way through a senseless society that our best intentions probably can’t save. At least we can still laugh about it. 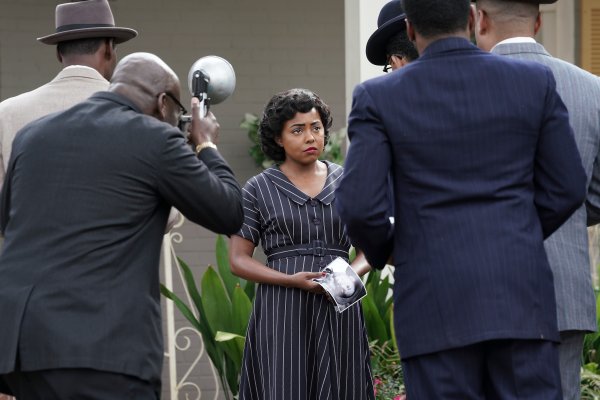 Women of the Movement Is a Flawed But Crucial Retelling of the Emmett Till Tragedy
Next Up: Editor's Pick