This is the role Alia Shawkat has been waiting for.

Since the cult hit Arrested Development launched Shawkat as Maeby Fünke, the 27-year-old actor has played her fair share of leading roles in indie films. But now sees her tackling her biggest part since. In the TBS comedy Search Party, she plays Dory, a pushover so desperate for purpose that she goes on a detective mission to find a missing girl she barely knew. The darkly funny mystery traces the story of the restless Brooklyn misfit, and Shawkat’s knack for playing stunted growth is one the show’s best draws.

Shawkat fit right in when she guest starred on Broad City and Portlandia, but Search Party isn’t just a hipster comedy; it’s more like a neo-noir that shoves the conversation about the “me generation” into much more confrontational territory. Before the Nov. 21 series premiere, Shawkat talked to TIME about playing “the ethnic best friend,” the Emmys and why she wants this comedy to be a wake-up call at a critical time.

TIME: Search Party is a unique mystery-comedy, but people may be inclined to compare it to shows like Broad City, Girls and Portlandia. What do you think sets it apart?

Alia Shawkat: I think that the main difference is the mystery aspect. It’s a really specific plot instead of commentary on characters, which is what drew me to it. When you watch those other shows, there are similarities, but hopefully people will like the subtleties in the tone, which is very different from Girls or Broad City, and I’m a big fan of both. This isn’t fantastical. It’s utterly realistic, but there’s something bizarre about the way the people decide what they want to be real.

The show is explicitly concerned with these people who live in their own realities. Are you optimistic that a comedy about self-involved hipsters can connect with people?

Yes, I definitely am. That’s a really good question because that’s the way I look at art. Empathy is why entertainment is always growing, and for millennials, everyone is judging them and trying to grab their attention by insulting them. We’re living in a time where everyone has 25 profiles and they’re having 25 conversations. It’s a lot to dice yourself up like that, and I think people will see versions of themselves in the show. The reason I’m hopeful is we tried to create characters that make people see even the worst in themselves.

On the show, Dory’s a misfit. What experiences with rejection did you draw on for this?

After Arrested Development, I didn’t know for sure if I wanted to be an actor. I was hitting this wall, where I was the “ethnic best friend” or the “ sassy teenager.” It felt like the same note, and I didn’t feel like I was growing. In the pilot’s job interview scene, my character apologizes for nothing all the time, and that’s something I experienced within the industry. I started when I was younger, but now I have an understanding of the ebbs and flows. I had to decide if I wanted to be in this industry, and I do want to make my own work and be in more control.

You mentioned “sassy teenager” and “ethnic best friend.” Where do these labels come from?

They definitely come from audition breakdowns. They truly say ‘half some ethnicity and half white” but the main girl is a “white blond girl,” and she’s the innocent one, and I’m supposed to be the one who pushes her. I felt like with Whip It, there was a breakdown like that, but at the same time, the script was great so it’s something I’m proud of. Maeby Fünke in Arrested Development is a sassy teenager too, but the writing is very smart. I feel very lucky Arrested Development was so successful because I never really got too much attention and I was able to evolve instead of only being seen as one character.

There’s a part in Search Party that’s obviously calling Hollywood out for being unrealistically appearance-driven. What’s made you feel like your industry is unmeritocratic?

There are definitely a lot of roles I didn’t get based off of the way I look, but I’m not going to let that stop me. I’m going to write stories for myself or work with filmmakers who want to tell stories about real people. Some of the s–t that happens in the industry feels like it’s out of a movie, but I’ve come to terms with it, and I had to decide how much I let it affect my work.

It seems like a very odd old trope. A character breakdown will have “must have sex appeal” or have to dress a certain way to be seen, and naturally, women in general are put in a position of desire. Not to be crass, but they’re supposed to be f–kable, and I’ve dealt with things like that. It’s not about ignoring it, just continuing to work even though it’s happening.

The underemployed people on the show reminded me of the moment when Hillary Clinton called Bernie Sanders supporters the children of the Great Recession. Do you think there’s truth to that view of young people today?

Yes, definitely. People within my age group are proposing a self-image or writing a blog or a record more than they’re actually employed, and I genuinely ask, “How are you actually making money?” The access to information has shifted and younger kids can make money off a tweet, so they’d follow that instead of their interest in biology, which takes years of school. The technological revolution has really disconnected people spiritually.

The internet is also where fiercely loyal fans came together to revive Arrested Development. How did that affect you?

No one knew about it once it was canceled and every year, it grew. That definitely affected my career. I was able to meet directors and producers with good taste. It was a cool calling card for awhile. Without younger generations starting websites and that conversation, it never would have become this cult thing. It would have been some show Fox canceled.

In the show’s last season, your character’s big moment was her rant at the Hollywood kids awards ceremony. Do people care about awards shows like the Emmys?

I don’t think so. I went to the Emmys this year, and even though I think great people won, I think award shows in general are pretty old-fashioned. It just has value in the industry, and that’s why it’s funny. It feels like the The Emperor’s New Clothes. When you’re there, it’s important and a lot of people are paying attention to it, but it’s actually just our weird small social circle. I don’t think awards have much value. There’s all this money and dressing everybody up. It’s going to have to hit a ceiling. It’s gotten ridiculous.

Recognition is important if it encourages people to keep doing what they’re doing, but I have a bitter note with it because if you get an award, then all of a sudden, you’re able to work more. The only value of an Emmy if I won would be that the show would go on for a couple of years and I’d be considered for roles with big directors, even if I’m not necessarily right for the part.

What would you like to happen for Maeby in Arrested Development’s upcoming season?

The Netflix series ended with her going to jail for sleeping with someone underage. I’d like to see her in prison running s–t. Maeby is at her best when she does that. She’s not the smartest in some ways. She’s a people person who works off her instincts. So I’d like to see her as a mother hen in a prison.

Sounds like a spinoff.
It could be an Orange Is the New Black crossover! 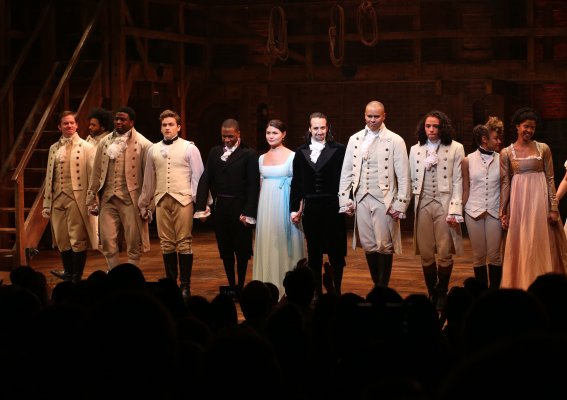 Hamilton Stars Praise Cast For Addressing Mike Pence: 'We Stand Together'
Next Up: Editor's Pick