As we prepare to close the book on 2021, Disney+ is opening up another one, and this tome comes from a library far, far away. The Book of Boba Fett, a new series that’s a spin-off of the acclaimed Star Wars show The Mandalorian, will premiere on December 29.

Despite having little to do in the original trilogy besides stand around looking cool (in The Empires Strikes Back) and seemingly dying like a chump (in The Return of the Jedi), Boba Fett has long been one of the franchise’s most popular characters. The bounty hunter escaped death in several comics and books that were thrown out of official canon when Disney restarted the films with Episode VII, but The Mandalorian marked his return to the Star Wars universe. After making a teasing cameo appearance in the first season, Boba returned in season 2, where he was played by Temuera Morrison. The New Zealand actor kind of reprised his role because he played Boba Fett’s father, Jango Fett, in Attack of the Clones, and since Boba is an identical clone of Jango, they’re basically the same.

Boba Fett went on an adventure with the titular Mandalorian to finish off the season, but the finale’s post-credits scene teased that he would be getting his own series which would follow him to Tatooine where he seems poised to take over Jabba the Hutt’s crime empire. To prepare for what looks like Star Wars’ take on organized crime, let’s go over some Boba Fett backstory.

Who is Boba Fett?

Temuera Morrison in The Book of Boba Fett
Lucasfilm

Boba Fett made his live-action debut in 1980’s The Empire Strikes Back, though hard-core Star Wars fans will no doubt be quick to point out that he actually first appeared in an animated segment in the infamous 1978 Star Wars Holiday Special. His first chronological appearance in the franchise, though, was in Attack of the Clones. In that movie, we meet Boba as a little kid (here played by Daniel Logan), when Obi-Wan Kenobi (Ewan McGregor) travels to the planet Kamino to investigate rumors of a Clone Army. Every single clone trooper was a modified copy of Jango Fett, a Mandalorian (though not as devout one as Pedro Pascal’s title character in The Mandalorian). Boba was different, as he was the only clone that wasn’t altered to age faster or be more obedient. (There was one other special clone, a female version of Jango named Omega who appeared in the animated Bad Batch series but probably won’t factor into The Book of Boba Fett.)

Boba was Jango’s son, for all intents and purposes, but he didn’t get to spend too much time with dear old dad because Jango died fighting Jedi in the big battle that closed out Episode II. The animated series The Clone Wars sort of helps to fill in the gaps of what happened to Boba after he watched Mace Windu decapitate his dad, but most of what happened between Episodes II and IV happens off-screen. At some point, he started wearing his dad’s Mandalorian armor and became a bounty hunter, eventually taking a job with Darth Vader to help try to capture Luke Skywalker. In the process, Boba captured Han Solo, froze him in carbonite, and sold the Hansicle to the crime lord Jabba the Hutt.

Boba hung around Jabba’s palace on the desert planet Tatooine, but when Luke and his pals pulled off their (convoluted) plan to rescue Han, Boba suffered a jetpack malfunction and went plummeting into the jaws of a Sarlaac — a buried monster that slowly digests its prey over the course of 1,000 years. It was an inglorious end to a surprise fan-favorite character…or was it?

What did Boba Fett do in The Mandalorian?

Temuera Morrison in The Book of Boba Fett
Lucasfilm

Canonically, that’s the last anybody saw of Boba until he reappeared in The Mandalorian. How exactly he escaped the Sarlaac is yet to be revealed, but one way or another he got out of the belly of the beast. His armor, though, was found (and worn) by a local named Vanth (Timothy Olyphant), and Vanth gave the Mandalorian armor to the Mandalorian (Pedro Pascal’s Din Djarin) after the pair killed a menacing Krayt Dragon together. Boba, along with Fennec Shand (Ming-Na Wen), a bounty hunter whose life he saved, manages to track Din down on the planet Tython. Boba proves his dad’s Mandalorian heritage and then just lays waste to a ton of stormtroopers. He ends the season by accompanying Din and the Mandalorian’s other various allies on a mission to rescue Grogu, aka Baby Yoda.

Upon successful completion of the mission, Boba and Fennec got back on his ship (the unfortunately named Slave I) and headed off to Tattooine, as the post-credits scene revealed. The pair strolled into Jabba’s mostly abandoned palace, quickly dispatched of Bib Fortuna, one of Jabba’s lackeys who had seemingly been running the place, and took a seat in the throne. Based on trailers for The Book of Boba Fett, the series will be about Boba, with Fennec as his No. 2, building a crime empire of their own in the vacuum that Jabba left behind.

The Book of Boba Fett will be the most in-depth look at Boba Fett as a character in the current Star Wars canon, but there are a ton of stories involving the bounty hunter that are now no longer canon. Prior to Disney’s takeover of the franchise in 2012, Boba was a regular feature in what was then called the Expanded Universe—a sprawling series of books, comics, and video games. In that canon, Boba escapes the Sarlaac thanks to his Mandalorian armor and sheer determination. He went on to become the leader of the Mandalorians during an intergalactic war and eventually trained one of Leia and Han’s children to kill the other one after their turn to the dark side. However, none of that is canon (the Expanded Universe has been renamed “Star Wars Legends”) so The Book of Boba will be a brand-new page for the character, though the new movies and shows do on occasion borrow or remix plots and characters from the Legends canon.

What can we expect from The Book of Boba Fett?

Jennifer Beals in The Book of Boba Fett
Lucasfilm

Promotional material for The Book of Boba Fett has kept the plot pretty vague, though the basic premise seems pretty straightforward. Boba, who claims to have put his bounty hunting days behind him, wants to rule the criminal underworld that Jabba the Hutt once loomed over. He’s gathered Jabba’s former generals and is proposing that they work together to their mutual benefit and wealth. Where Jabba ruled with fear, Boba will rule with respect (although given how good Boba is at killing his enemies, it probably wouldn’t be a bad idea to be a little afraid of him.)

So far, Boba and Fennec are the only familiar characters that are confirmed to appear in The Book of Boba Fett, but given how The Mandalorian loves to bring back fan-favorite characters or pepper the screen with Easter eggs, it would not be a shock if an old face or two appears. (My money is on Watto, personally.) Other characters from The Mandalorian might pop up, too, as the series is reportedly more closely linked to the flagship Star Wars series than other spin-offs like the Rosario Dawson-led Ahsoka.

The Book of Boba Fett boasts a lot of the same creative team that The Mandalorian did, as it’s being executive produced by Jon Favreau. Dave Filoni, the mastermind behind the beloved Clone Wars animated series, produces as well, as do Lucasfilm president Kathleen Kennedy and Robert Rodriguez, who directed the Mandalorian episode where Boba made his violent return. The Mandalorian composer Ludwig Göransson also returns to score the spin-off. Filming for the series began in November 2020, using the same groundbreaking LED screen projection techniques utilized in The Mandalorian.

The first of The Book of Boba Fett’s seven episodes premieres on Disney+ on Dec. 29, with new episodes debuting every following Wednesday. The finale will air on Feb. 9. 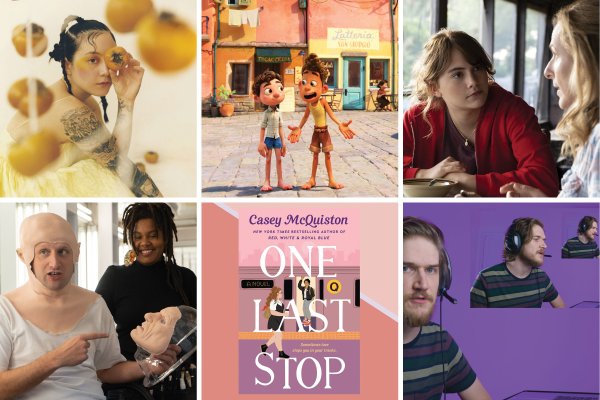 73 Great Things We Read, Listened to or Watched This Year
Next Up: Editor's Pick