Get Back Reveals, in Vivid Detail, the Central Reasons for the Beatles’ Breakup

The story of the Beatles‘ breakup has been told thousands of times before: in memoirs, biographies, imagined reenactments. But Get Back, a three-part documentary that arrived on Disney+ on Thanksgiving, offers something none of those previous attempts could: extended firsthand footage of the bands’ deterioration.

In January 1969, the Beatles convened in London to record a new album and documentary film. A camera crew captured the quartet as they listlessly learned new songs and squabbled with each other. While some of that footage was turned into the drab 1970 film Let It Be, nearly 60 hours of video and 150 hours of audio recordings were shelved and never revisited.

A few years ago, The Lord of the Rings filmmaker Peter Jackson, a Beatles fanatic, asked the band’s company Apple Corps for permission to revisit the footage. He hoped to build a truer portrayal of the band’s last days—that captured not only their confrontations but also the kinetic joy and breathtaking creativity that emanated out of those sessions. Here’s what Jackson’s 7-plus-hour edit of the tapes show us about the Beatles’ last year and why they split apart.

For most of the Beatles’ early years, guitarist George Harrison barely wrote any songs; their music was fueled by the seemingly inexhaustible creative well of Lennon-McCartney songcraft. But as the ’60s wore on and Harrison found his creative voice, he became more and more resentful of how John Lennon and Paul McCartney would dismiss his work or boss him around. Harrison had just spent some time with The Band in upstate New York and was inspired by their differing vision of collaboration, in which musical equals created together, each on their own terms. He even brought a new song to the “Get Back” sessions, called “All Things Must Pass,” that he described as “Band-y.”

But the Beatles barely returned to the song after learning it, and belittled his other contributions to the sessions, including “I Me Mine.” Meanwhile, Paul McCartney gave Harrison extensive guitar direction in a way Harrison felt to be overbearing and pushy. He lashed back at both of them, calling the Lennon-penned “Don’t Let Me Down” “awful.” “If we had a tape recorder, you’d throw that out straight away,” he told Lennon.

One day, as McCartney and Lennon worked through an arrangement of the fittingly-named “Two of Us,” Harrison stormed out, saying off-handedly, “I think I’ll be leaving the band now… Get a replacement.”

After several meetings of cajoling, the other three Beatles eventually convinced him to return. But as the sessions came to a close, Harrison once again expressed his desire to break off from the band and to record all of his compositions separately. “It would be nice if any of us could do separate things as well. That way, it also preserves the Beatle bit of it more,” he says to an encouraging Lennon. “I’m just gonna do me for a bit.”

Harrison’s recording of “All Things Must Pass”—released the following year with a drenched guitar approach reminiscent of the Band—would become one of the most revered rock songs of all time. A Beatles influence remains, however: it was Lennon that penned the lyric “a mind can blow those clouds away” when he misread the word “wind” on Harrison’s lyric sheet.

With the band morose and jamming aimlessly, McCartney repeatedly tried to take control of the sessions: he wrote the majority of the songs, stressed the importance of having a set schedule, and gave instructions to each of the band members about their parts. (“Haven’t you written anything else? We’re going to be faced with a crisis,” he scolded Lennon after learning that Lennon hadn’t produced any new material.)

The other members, Harrison especially, resented his micromanagement. McCartney himself feared the role he had taken on: “I’m scared of me being the boss. And I have been for like a couple of years.”

After Harrison stormed out, Lennon and McCartney talked out their growing differences in a lunch that was secretly recorded by a microphone hidden in a flowerpot. “You’ve always been boss. I’ve been secondary boss,” Paul told John.

Lennon added: “George said he didn’t get enough satisfaction anymore because of the compromise he had to make to be together. It’s a festering wound that we’ve allowed. Yesterday, it’s a wound that festered even deeper, and we didn’t give him any bandages.”

The death of manager Brian Epstein hung over the band

In one conversation between the four band members, McCartney reveals part of the reason that he’s tried to take on a more authoritative role: because the band has been plagued by a lack of motivation ever since their manager, Brain Epstein, died from a sedative overdose in 1967. “We were always fighting that discipline. There really is no one there now, to say, ‘Do it!’ Daddy’s gone away now,” he says.

Harrison conceded the point. “The Beatles have been in the doldrums for at least a year. Ever since Mr. Epstein passed away, it’s never been the same.”

He added, in a deadpan: “Maybe we should have a divorce.” After a moment of awkward silence, Lennon responded in kind: “It would help the children.”

That sort of comment was indicative of the way the Beatles approached their imminent demise: with a mix of humor and resignation. They read tabloids about their own foibles seemingly daily, mock-boxing after reading that they had supposedly exchanged punches. At one point, McCartney jokes that their concert should feature newsmen delivering news from around the world, and then at the end of the program, announce that “the Beatles have broken up.”

Business disputes came between the members

Toward the end of the sessions, a new character in the Beatles saga is introduced: the businessman Allen Klein. Lennon, who met Klein during The Rolling Stones Rock and Roll Circus, starts explaining to Harrison how impressed he is with Klein, both personally and in terms of his negotiating tactics. “He knows me as much as you do,” he tells a visibly skeptical Harrison.

After the group met with Klein, Ringo Starr—decidedly the least opinionated member when it came to all of these issues—expressed some cautious optimism, calling him a “conman who’s on our side for a change.” But McCartney would instead voice his desire to be managed by his father- and brother-in-law, Lee and John Eastman. It was this power struggle between Klein and the Eastmans that led to McCartney suing his bandmates to dissolve the group in December 1970.

The presence of Yoko Ono was not a huge negative factor

Tabloids loved to dwell on Ono as the reason for the Beatles’ split. In Get Back, she appears at every session, sitting right next to Lennon, dancing in her seat, pressing her nose into Lennon’s back and at one point making out with him during a take of “Oh! Darling.” But none of the band members appear much bothered by her constant presence; they joke and talk with her comfortably.

At one point, McCartney discusses this new dynamic in depth, conceding that Ono’s emergence did cause him and John to drift apart: “We lived together and we played together. We were in the same hotel room, up at the same time every day. As long as you’re this close all day, something grows. When you’re not this close physically, something goes.”

But McCartney was adamant about not blaming Ono for the band’s struggles. “She’s great, she really is alright. They just want to be near each other. I think it’s very silly of me or anyone to say, ‘No you can’t,’” he says. “It’s gonna be such an incredibly comical, silly thing in 50 years’ time: ‘They broke up because Yoko sat on an amp.’”

After a slow start, the last couple weeks of the “Get Back” sessions reveal the Beatles firing on all cylinders, forging airtight live arrangements for enduring classics like “Don’t Let Me Down,” “Let It Be,” and “The Long And Winding Road.” One of the film’s most astonishing scenes shows McCartney, frustrated one morning by Lennon’s lateness, willing the song “Get Back” into existence in real time.

After a later take of “Two of Us,” Harrison—who had stormed out during that song weeks earlier—remarked that “It sounds lovely, that, now, after all the anguish we went through it.” The sessions famously ended with a legendarily crisp rooftop performance that marked the last time the Beatles played together in public. 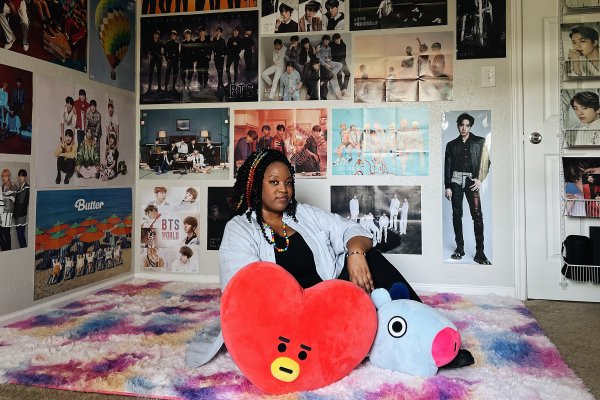 Portraits of the Global BTS Fandom
Next Up: Editor's Pick