There’s a curious sensation to realizing that Paul McCartney — the lad of lads, the Beatles precocious imp, Fab Macca Wacky Thumbs Aloft — is turning 75 years old. Though it may be odder still to imagine a world without him. For more than 50 of those years he has not been simply Paul McCartney (or, since 1997, Sir Paul) but a Beatle, a known phenomenon in all hemispheres, a star of absurd magnitude, and, soon after, a man of absurd wealth. The Beatles last played before a paying audience in 1966. The band recorded together for the final time in ’69.

And for everything that McCartney has accomplished since — the 12 Grammy nominations; the six No. 1 hits with the Wings in the 1970s; the platinum chart-toppers with Michael Jackson and Stevie Wonder in the 1980s; the jaunt into classical composition; performing at Buckingham Palace; his 2015 recording (hey there, kids) with Kanye and Rihanna — a Beatle he will always be, defined by those prolific, god-given, glorious years of the Fab Four’s prime. Paul wrote “Yesterday” when he was 22.

That time period, and those imperishable songs, inevitably form the heart of any McCartney stock-taking, even as he continues to beat on, plucking those old melodies and writing new ones, finding new collaborators and embracing a life he has (pretty much) always embraced. He plays bass and guitar and piano (and drums sometimes) and he sings Let it Be like no one else on earth. You go see him perform and he plays 32 songs in a set. When McCartney touched down in Japan in April, 2017, ahead of playing three sold-out Tokyo Dome shows in four nights, a delirious mob of fans awaited, screaming and reaching out their hands. The airport police had to hold them off. It was a scene descended from the mid-1960s, and Paul was clearly pleased. The fans were still needing him, and, yes, still feeding him — even at 74.

In August of 1965 the Beatles began their second U.S. tour playing before 55,000 fans at Shea Stadium in New York. Beatlemania was in full flower, and young women had to be restrained from leaving their seats in the stands and rushing toward the stage, which had been set up near the center of the ball field, by second base. After the show — an ecstatic 12-song set that included Help!, Ticket to Ride and I Feel Fine — the band left the field in an armored station wagon driven by a member of the Mets grounds crew, Pete Flynn. It happened that Flynn had immigrated to America from Ireland’s County Leitrim, a short plane flight over the Irish Sea from Liverpool, where Paul and the Beatles were born.

McCartney returned to play at Shea in 2008, as an on-stage guest of Billy Joel’s, in a midsummer performance celebrating the ballpark’s long history. (It was torn down the following year.) Paul landed in New York when Joel was already late in his set and by the time McCartney entered the stadium he needed to travel swiftly to get to the stage area behind the outfield fence. There, waiting behind the wheel of a golf cart, and wearing a Mets cap, was Pete Flynn.

In the 43-year interval circumstances had evolved. Flynn, a junior crew member in ’65, had risen to become head groundskeeper. He had a small, private office just off the stadium’s inner concourse and he was eyeing a well-deserved retirement at which he would be feted and recognized as a New York City mainstay. Because of his long and respected association with the Mets he was inducted into the Irish American Baseball Hall of Fame. McCartney had become — so long as men can breathe, or ears can hear — immortal.

“I drove you the first time,” Flynn said, extending a hand as McCartney clambered into the golf cart beside him.

McCartney was his bouncy self, slapping five with stadium workers and New York City cops as they drove through the bowels of the building. Then, just minutes later, he was out on stage, under the floodlights, playing his left-handed Hofner bass, singing lead on I Saw Her Standing There (McCartney-Lennon, 1963), the whooping, fans out of their skins with joy. There were about 55,000 folks there that night too. At its essence, then, McCartney’s public life, and the magical moments within it, is not much different than it was back when. It’s just that he is turning 75. Thankfully. John. George. We have known too much of the alternative. 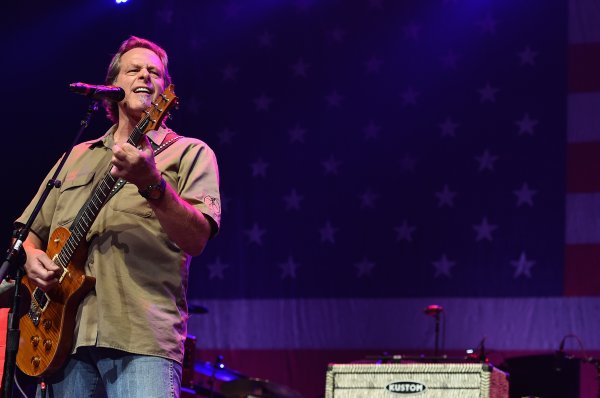 Ted Nugent Says He Will Not Engage in 'Hateful Rhetoric Anymore'
Next Up: Editor's Pick