The Beatles Performed Their Last Live Gig 50 Years Ago. Here’s the Story Behind the Rooftop Concert

By Jason Kruppa and Kenneth Womack

In January of 1969, the Beatles had just slogged their way through a soul-destroying month of misery in which John Lennon was wracked with heroin addiction, a frustrated George Harrison briefly quit the band and Paul McCartney worked ceaselessly as the group’s self-anointed cheerleader — so much so that, by the end of the month, his relentless good-natured energy was beginning to backfire and was driving the Beatles perilously close to the edge of disbandment.

But then, with one incredible stroke, the Beatles turned their lingering bad fortune on its head, dug deep, and for 42 minutes found the spark that had been eluding them in the form of their legend-making Rooftop Concert. They had stopped touring in 1966, but on a blustery day 50 years ago — Jan. 30, 1969 — they made history atop the Apple Corps office building in London’s garment district.

How, though, did they reach that redemptive moment?

The concert was part of the Get Back project, a two-hour television program that would showcase the Beatles rehearsing and performing — an idea that found its origins in a September 1968 session, when the band members mimed their way through promotional films for “Hey Jude” and “Revolution” under the direction of Michael Lindsay-Hogg. As they downed one convivial Scotch-and-Coke after another, the group reminisced about performing in front of a live audience.

“They were jamming and having a good time and having a better time than they thought they were going to have,” Lindsay-Hogg later stated. “So they sort of thought maybe there is some way they can do something again in some sort of performance way.”

That December, Paul asked engineer/producer Glyn Johns to oversee recording for the television program. Johns had recently performed the same role for the Rolling Stones’ Rock and Roll Circus program, which aired that same month. But the Beatles’ regular producer, George Martin, was still very present, appearing on the first day of filming and nearly every day afterward for at least some part of the day. He secured multitrack recording equipment for the Twickenham rehearsals and, once the whole show moved to the Apple building, had to set up a recording studio there from scratch in less than a week.

The Beatles’ failure to establish clear roles for each man put both Johns and Martin in awkward positions. But both men kept showing up and contributing. And when George Harrison asked Johns how they can get the sound of a “bad piano” on “For You Blue,” Martin came to the rescue by sliding sheets of newspaper between the hammers and the strings of the instrument to render the requested “bad” sound.

The Beatles thought they were setting out to prove — if only to themselves — that they were still a great live rock ‘n’ roll band. But in truth, they had found themselves engaging in an act of near-fatal nostalgia.

From the beginning, they were shaped and molded by Martin to be artists, rather than a working rock ‘n’ roll group, and they had not only played along, but had taken up Martin’s methods and rewritten the rules of the game. For this reason, the idea of “getting back” was utter folly for the Beatles, the band that had become identified with the ultimate in studio production on such landmark albums as Revolver, Sgt. Pepper’s Lonely Hearts Club Band, and The Beatles (The White Album). In stripping away this identity in the quest to create a television program about the band at its “purest,” they found to their slowly unfolding dread that they had nothing else with which to replace it. In the face of such a vacuum, collapse seemed inevitable.

Amid rising tensions, on Jan. 10, Harrison walked out, saying flatly, “See you ’round the clubs.”

When he met with his bandmates the afternoon of the 15th, the guitarist shrewdly demanded that the group shift the Get Back proceedings from cold, antiseptic Twickenham to their basement studio at Apple Corps. Working at their Savile Row office building from Jan. 21 through the end of that fateful month, the Beatles slowly but surely found their footing. Day after day, their focus improved until they had polished up arrangements for “Don’t Let Me Down,” “Get Back,” “For You Blue,” “Two of Us,” “I’ve Got a Feeling,” “Dig A Pony,” “Let It Be” and “The Long and Winding Road,” and successfully revived a song they had originally abandoned in 1963, “One After 909.”

But for Lindsay-Hogg, the band’s positive momentum didn’t solve a major problem for his documentary shoot. “I’m going crazy!” he remarked on Jan. 29, wondering aloud about how they might possibly wrap up the Get Back project. “At the moment, this documentary’s like No Exit,” Lindsay-Hogg complained. “There’s a lot of good footage, but no pay-off.”

That afternoon, the “pay-off” appeared to have presented itself when Lindsay-Hogg, with McCartney and Beatles roadie Mal Evans in tow, stepped out onto the rooftop above Savile Row.

For assistant recording engineer Alan Parsons, the Jan. 30 concert made for “a magic, magic day” — even though the Rooftop Concert was in jeopardy until the very last moments. Indeed, even with their gear set up on the roof, the band considered scuttling their director’s plans. As Lindsay-Hogg later recalled, “We planned to do it about 12:30 to get the lunchtime crowds. They didn’t agree to do it as a group until about 20 to 1:00. Paul wanted to do it and George didn’t. Ringo would go either way. Then John said, ‘Oh [f—k], let’s do it,’ and they went up and did it.”

Rough and ragged, fraying at the seams and played to a largely unseen audience, the Beatles’ final set was held together by moments of sheer enthusiasm and delight. As they listened to playback of the recording immediately afterward, the Beatles were clearly energized and in good spirits. Martin suggested, hopefully, that this success could be a “dry run for something else.”

Instead, it would prove to be their last live concert ever, and the band broke up the next year. Though the Rooftop Concert demonstrated the Beatles’ ability to bring order out of chaos, in the end — as inspiring as it was — it didn’t point to a new beginning.

Jason Kruppa is a music historian and the host of the Producing the Beatles podcast, which explores the creation of the Beatles’ music from the perspective of producer George Martin. Dr. Kenneth Womack is the author of a two-volume biography of the life and work of Beatles producer George Martin. He is Dean of the Wayne D. McMurray School of Humanities and Social Sciences at Monmouth University. 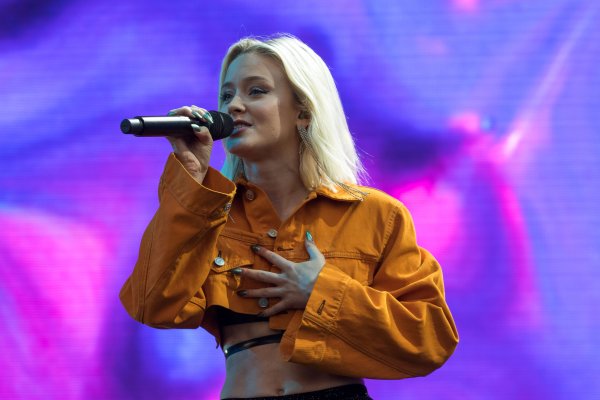 Zara Larsson Proves Pop Stars Can Be Both Fun and Thoughtful
Next Up: Editor's Pick