The Lord of the Rings Movies Are Now Holiday Movies. Here's Why

At face value, there’s nothing about The Lord of the Rings trilogy that screams “Christmas movies.” Truly, what does this high fantasy adventure through orc-ridden Middle-earth, presented without a hint of holiday cheer, have to do with actual Earth’s end of the year festivities?

But what Gandalf muses about hobbits while trying to remember the way through Moria is just as accurate when considering these now classic films, “You can learn all that there is to know about their ways in a month and yet, after a 100 years, they can still surprise you.”

It’s only been 19 years since The Fellowship of the Ring hit theaters, but even diehard fans might be amazed to discover how perfectly December calls for an annual Lord of the Rings rewatch. Think about it: Instead of settling for the same old holiday viewing options, you could be hunkering down for nine hours (or 12, if you go for the extended editions) of J.R.R. Tolkien greatness each year. Classics like It’s a Wonderful Life and How the Grinch Stole Christmas are all well and good. But the three-movie quest to destroy the One Ring is in a category all its own. And it’s increasingly becoming a part of many holiday traditions.

Here’s why The Lord of the Rings trilogy deserves a place in your Christmas movie catalog.

When The Fellowship of the Ring, The Two Towers and The Return of the King movies were released, they all arrived in theaters in the week leading up to Christmas in 2001, 2002 and 2003, respectively. Clearly, that can only mean that Peter Jackson and New Line Cinema intended the saga to be essential holiday season viewing.

If you had the privilege of getting to see the trilogy in theaters when it first came out, then you know there was nothing like packing into a crowded auditorium alongside fellow holiday moviegoers to watch a new installment in the franchise. It’s an experience that can’t quite be replicated at home, but rewatching the movies around the same time each year can at least help bring back some of that early 2000s Christmas nostalgia.

But the connection to holidays, and Christmas in particular, goes back to the source material. There’s a buried, oft-overlooked detail in The Fellowship of the Ring book that explicitly states that the titular company sets out from Rivendell with the One Ring on their quest on Dec. 25. Though Tolkien wrote “a cold grey day near the end of December” in the main text, in Appendix B, he identifies the specific day as none other than Dec. 25.

This exact date isn’t explicitly mentioned in the movie, but that doesn’t make it any less part of the Lord of the Rings canon. If Die Hard is considered a Christmas movie simply for its timing, then Fellowship, at least, deserves the same treatment.

An image of Gollum from 'The Lord of the Rings: The Return of the King'
New Line Cinema

How the Grinch Stole Christmas teaches children a valuable lesson about how Christmas, to put it in Dr. Seuss’s own words, “doesn’t come from a store.” But if you’re looking for movies that illustrate the downside of an obsession with material goods, there’s no better choice than Lord of the Rings.

Simply show your kids the first 10 minutes of The Return of the King (Smeagol’s disgusting and horrifying transformation into Gollum) to give them a lifelong aversion to expensive jewelry. Nothing will drive home the potential dangers of ill-informed purchasing better than hearing Andy Serkis creepily whisper, “And we forgot the taste of bread, the sound of trees, the softness of the wind. We even forgot our own name,” after biting directly into a live fish.

There’s also a lot of lessons about the power of friendship and hope and all that important stuff. But mostly, Gollum and his precious.

Ian McKellen as Gandalf and Elijah Wood as Frodo in The Lord of the Rings: The Fellowship of the Ring
New Line/WireImage

Gandalf may not have the ability to deliver presents to every child in Middle-earth all in one night, but as far as kindly magical beings with long white beards go, he’s right up there with ol’ Saint Nick.

When we first meet Gandalf the Grey in Fellowship, he treats the hobbit children of the Shire to a delightful firecracker show despite some sidelong glances from a few hobbits who aren’t too fond of his magic. Talk about the true spirit of Christmas. He then spends the rest of the series journeying to deliver a prized possession before time runs out, protecting his hobbit companions at all costs, and firing off inspirational quotes.

There’s also the added bonus that Ian McKellen’s Gandalf, seems to embody some of the wizard’s Santa-like qualities in real life. In a 2017 interview with Empire, McKellen revealed that he frequently lets young fans try on one of his most prized souvenirs from the Lord of the Rings set. “I keep [Gandalf’s sword] Glamdring in my hatstand and the pointy hat in the basement, often worn by visiting youngsters,” he said.

Cate Blanchett as Galadriel in 'The Lord of the Rings: The Fellowship of the Ring'
New Line Cinema

If you’re a literal person and need anything at all that ties into the holiday season, there is one aspect that both Christmas and Lord of the Rings have in common: elves. But in the Lord of the Rings universe, elves have a lot more going on than just making toys for kids.

J.R.R. Tolkien’s immortal and highly-powerful beings don’t spend their days toiling away in Santa’s workshop, but they’re nonetheless still elves—which means they have a place in holiday lore. And don’t forget about the scene in Fellowship where Galadriel gives everyone a personalized elvish gift on their way out of Lothlorien. These movies practically belong on the Lifetime network.

So, if you find family members pushing back on the idea of spending up to 12 hours watching the fantasy films, make sure they know elves play a big role in the success of both the holiday and the eradication of Sauron’s evil.

Fun for the whole family

Viggo Mortensen as Aragorn in 'The Lord of the Rings: The Return of the King'
New Line Cinema

When the opportunity arises to decide what movie to throw on this holiday season, it’s the duty of every Lord of the Rings fan to declare, “I will take it!”

Finding something the whole family will enjoy watching can be an arduous task. But who among us can deny the pull of the One Ring? No matter how many times you’ve seen the trilogy, all three movies are still utterly enjoyable—for kids and parents alike.

Plus, if you basically know what happens in every scene, then they’re the perfect background entertainment for decorating the Christmas tree, baking holiday treats or any other festive activities you might have in store. You simply can’t go wrong with Lord of the Rings.

Elijah Wood as Frodo Baggins in 'The Lord of the Rings: The Return of the King.'
Pierre Vinet—New Line Cinema

If you’re still not convinced that the Lord of the Rings movies should be considered Christmas movies, then keep in mind just how big of a time commitment it is to fully rewatch the trilogy.

When else in a typical year are you going to have nine to 12 hours to dedicate to watching Jackson’s award-winning saga than during holiday downtime? It’s time to accept that the holiday season is also the season for the Lord of the Rings. 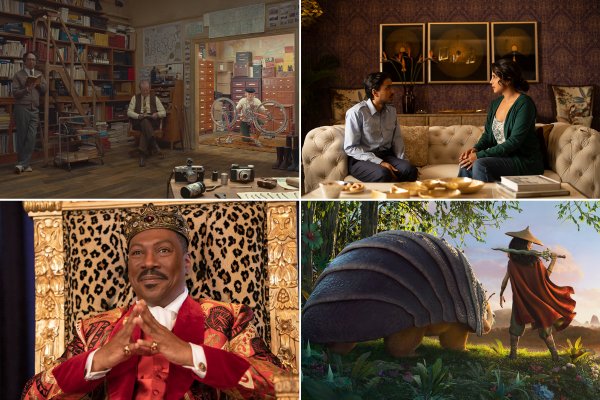 The Most Anticipated Movies of 2021
Next Up: Editor's Pick