Forget About the Accent. Lady Gaga Is Tremendous in House of Gucci

Possibly the best moment in Ridley Scott’s rococo-a-go-go true-crime drama House of Gucci is the one in which the brash, ambitious young typist Patrizia Reggiani, in pursuit of Maurizio Gucci, the shy and charming heir to the old-money leather-goods empire, writes her phone number in bold strokes of lipstick on his motorbike’s windshield. That’s a pro move by itself, but what comes next is the killer gesture: she swipes the bullet across her lips and, without the benefit of a mirror, effects a tidy scarlet cupid’s bow in two seconds flat. Either gesture by itself would be memorable. But it’s the seamless linking of the two, the easy swing from the inventively practical to the seductively frivolous, that’s the real trapeze act. The greater part of acting is what happens between the beats. And Lady Gaga, the actor who plays Patrizia in House of Gucci, knows just what to put in that space.

No one should be surprised that Gaga is such a captivating actor, both in House of Gucci and in her breakout film, the 2018 A Star Is Born. Singers often make terrific actors. They’re primed for it: All singing is acting, a channeling of feelings or remembered experiences through the body, the diaphragm, the mouth. A song is emotion drawn in the air, summoned by technique. Admittedly, bringing a character to life on a stage or screen does require a somewhat different mastery of craft, and not all singers can make the leap. But the core skills are there. As an actor, Gaga isn’t an anomaly; she’s just the latest in a long line of singers who have also given terrific screen performances.

Gaga’s character in House of Gucci is based on the real-life Patrizia Reggiani, a woman of modest means who fell in love with the shy, bookish Gucci scion Maurizio (played in the movie by Adam Driver as a timid charmer with a backbone of steel). After marrying into this illustrious family, Reggiani then drove a wedge through it. When her marriage to Maurizio fell apart, she hired a hit man to kill him. Her conviction in 1997 resulted in a 29-year prison sentence, although good behavior helped earn Reggiani, now 72, an early release in 2016.

By now, you may have read that in preparation to play Patrizia—in the movie’s vision, a woman who falls deeply and truly in love, only to become twisted by ambition, greed and jealousy—Gaga employed a number of acting tricks: She spoke with an Italian accent for six months straight, even when not in character. She embodied a vision of Patrizia first as a house cat, then as a fox, and ultimately as a panther, ruthless to the bone. Reading about Gaga’s dive into her character is great fun, but it’s best to think of her MO not as solid acting advice but as just another angle of her performance art—the equivalent to taking the stage in a spangled unitard and feathered wings wider than she is tall. Gaga’s approach to acting may be a method, but it has little to do with the Method, drawn from a set of performance precepts first laid down by Konstantin Stanislavski in czarist Russia and, much later, bowdlerized by actors who believed the path to great truth meant walking around in unwashed clothes for three months.

In the end, trust the tale, not the teller. No matter how she got there, Gaga’s performance in House of Gucci is both tremendous fun and ultimately touching, likely despite any technique rather than because of it. (As far as accents go, remember that the movie is set largely in Milan and its environs, where in real life most people would be speaking Italian. In House of Gucci, everyone speaks in English, often with a “That’s-a spicy meatball” accent—so anyone looking for realism is barking up the wrong Duomo.)

Gaga’s performance is wonderful because she’s alive to every moment. Patrizia and Maurizio meet at a fancy disco party. Despite his protestations that he can’t dance—accurate, as it turns out—she draws him out to the dance floor, where he stands like an awkward totem while she kaboodles around him. Gaga’s Patrizia is a bridge-and-tunnel seductress working a siren spell that, with the help of a little mild stalking, will eventually make her a Gucci. Yet in her shiny dress, with her eager smile and cupcake booty, she’s undeniably adorable. In these early scenes, Patrizia’s ambition and her guilelessness are so entwined that you can’t see where one leaves off and the other starts. She’s simply a young person who wants more, without really knowing what more is.

A great singer’s communication skills go far beyond those of us mere mortals. Singers generally know how to move, how to put their bodies to work in a language that goes beyond words. And even if they can’t literally make eye contact with thousands of spectators at once, they’re adept at creating that illusion. Frank Sinatra began his career as a heartthrob crooner, swaying at the mic like a willow embraced by the wind. No wonder women went mad for him in the 1940s: he was boyish and non-threatening, but subtly carnal even so, with a grave, thoughtful quality that served him well in the parallel acting career he began to cultivate seriously in the 1950s. He’s remarkable as the wiry, scrappy Angelo Maggio in the 1953 From Here to Eternity: it was as if the cavalier breeziness he’d brought to the song-and-dance comedies he made in the ’40s had passed through a flame, his swoony charm galvanizing into something deeper and richer.

Similarly, Doris Day, whose voice blended the best qualities of midday and dusk, may have been best known for her fizzy comedies, some as light as dandelion down. But she also gave some formidable dramatic performances: as singer Ruth Etting in Love Me or Leave Me (1955) and as the distraught mother of a kidnapped child in The Man Who Knew Too Much (1956), to name just two. Sometimes when the public wants one thing from you—your unadulterated sunniness—they underestimate your capacity to reflect your light off the moon.

There are, of course, singers who have failed miserably at the acting game: look no further than Mariah Carey in Glitter (though she redeemed herself with Precious). And there are singers who might have had greater acting careers if the stars had aligned differently. In 1972 Diana Ross, one of the most compelling R&B singers of her era, gave a stark and unsettling performance in Lady Sings the Blues, a Hollywoodized account of the life of Billie Holiday. The movie has the glossy feel of studio films of its day, but as Holiday, Ross cuts straight to the bone. To look into her eyes is to meet a challenge, to travel to a place where a shimmery evening gown, or the most extravagant evening gardenia, isn’t nearly enough to veil anguish.

Cher, Mick Jagger, Ice Cube, Janelle Monáe: the list of singers who are also terrific actors is long, even if some haven’t appeared in as many movies as we might wish. With only three years between major films—and with a pandemic and an Inaugural performance sandwiched in, no less—Gaga may be following a path wide enough to make room for a dual singing and acting career. Her performance in A Star Is Born was a kind of glissando between skill sets. As Ally, a singer who catapults from working in restaurants to selling out stadium shows, Gaga gave a performance glorious in its nakedness. Stripped of her Cleopatra-as-showgirl stage makeup and art-installation costumes—trademarks of the Lady Gaga persona, and part of what makes her so provocative as a performer—Gaga became wholly believable as the singer-next-door with a dream.

In its unabashed maximalism, House of Gucci is a different sort of movie, as heavily embroidered as an Alessandro Michele bomber jacket. Gaga in a strange way both amps it up and tones it down. We see how in an early scene, as the not-yet-glamorized Patrizia, she hastily masks her embarrassment when, while meeting the intimidating Gucci père for the first time (played by a suitably regal Jeremy Irons), she mistakes a Klimt for a Picasso. Mid-movie, a Reynard in ’80s shoulder pads, she manipulates her husband—who doesn’t need much convincing—into tossing deadweight family members from the business. And by the end, she has become a blank-eyed murderer, one whose ruthlessness has blossomed from her vulnerability like a splotchy black flower. Gaga makes all the right moves from house cat to fox to panther. But she hasn’t unlocked any new secrets that weren’t already in her songbook. From verse to chorus to bridge and on to the dramatic finish, the road map has always been there, written in the breaths between notes. 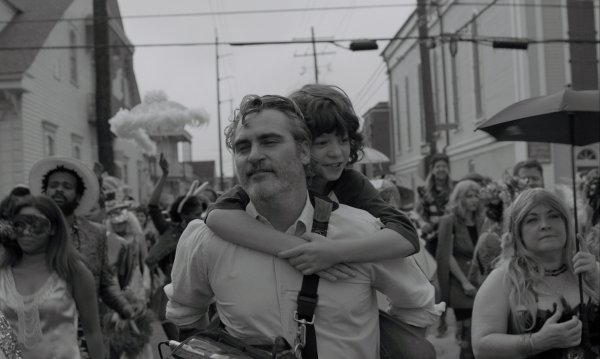 In C'mon C'mon, Mike Mills and Joaquin Phoenix Navigate the Puzzling Territory of Kid Logic
Next Up: Editor's Pick