Bradley Cooper Was Afraid to Direct. Then He Found Lady Gaga

Cooper spent more than three years working on A Star Is Born; “It’s the exact movie I wanted to make,” he says
Sebastian Kim—AUGUST for TIME
By Sam Lansky

If you’ve looked at a screen at any point over the past few months, you’ve probably seen the trailer for A Star Is Born–at a movie theater, on TV or on YouTube, where it’s already been viewed 9.2 million times. Or maybe you’ve seen the recut version of it, which reimagines the film starring the Muppets. Or maybe you follow the Twitter account dedicated to memes based on the trailer’s most memorable moments–like the one where Bradley Cooper’s aging rocker, Jack Maine, rolls down his car window and grunts at Lady Gaga’s aspiring singer, Ally, “Hey.” She turns. “What?” His eyes crinkle. “I just wanted to take another look at you,” he says. It’s the kind of perfect little movie moment that can thaw even the iciest of hearts.

A Star Is Born isn’t even out yet, and it has already ascended to the sort of pop-culture juggernaut status typically reserved for superhero fare. Over breakfast in a West Hollywood diner, Cooper, who co-wrote, directed and stars in the film, seems as if he still hasn’t taken a breath. The actor, 43, has been nominated for four Oscars already, and his movies have grossed nearly $8 billion worldwide. But when he took the helm as a director for the first time on A Star Is Born, he had no guarantee that this movie, a remake of one of the most iconic stories of the past century, starring himself opposite one of the most potent symbols of postmodern celebrity, would even work. He’d never sung on camera before. She’d never starred in a movie before. The stakes were high. The margin for error was slim.

To put it mildly, it works. The film premiered at the Venice Film Festival in late August to critical acclaim, quickly sparking awards buzz for both Cooper and Gaga. (Expect the original music, sensational throughout, to sweep too.) It’s not just festival hype. A Star Is Born is a true pleasure to watch, triumphant and sad and rich with a texture that’s anchored by two deeply felt performances. On this morning, Cooper has just returned to L.A. from Venice before he takes the film to Toronto, where the movie will be received just as enthusiastically. And he’s happy, of course, that everyone loves it. “It’s the exact movie I wanted to make,” he says, calling it “an artistic catharsis.” But like the movie, his emotions are complicated. “There’s a sadness in giving something away,” he says. “It doesn’t belong to you anymore.”

When the film opens on Oct. 5, it will belong, instead, to the world. And it’s not difficult to imagine what happens next. A Star Is Born‘s story is ultimately tragic, but it’s not a downer. And in a year when many of the best films have tackled worthy social issues, this one stands out because it’s just a big, old-fashioned love story–the kind Hollywood has all but stopped making. It’s likely to be both a commercial success and an awards-season shoo-in. Its closest reference point might be Titanic--but not even James Cameron had Lady Gaga. “To me it’s about the power of believing in someone, and believing in yourself,” Gaga tells me later by phone. “Now it’s really up to the public to decide what the movie means to them.”

The movie, of course, has been made three times already: first in 1937, starring Fredric March and Janet Gaynor; then in 1954, with James Mason and Judy Garland; and again in 1976, starring Kris Kristofferson and Barbra Streisand. Each film tells the story of a young unknown woman who gets discovered by a male star; her ascent to fame and their romance happen concurrently as he descends deeper into alcoholism, ultimately meeting a tragic fate.

For Cooper, it was the kind of story that spoke to him when he was a kid growing up outside Philadelphia, across the street from a movie theater. He’s happy that his career took nearly a decade to build as he worked steadily, because he got to learn along the way. “To me, I was majorly successful doing a Wendy’s commercial and paying off my student loans on Alias,” Cooper says. He spent a lot of time in the editing room shadowing people like J.J. Abrams, “logging hours of learning,” and got inspired by actors including Vince Vaughn, with whom he worked on Wedding Crashers: “I remember being blown away by how fearless he was,” Cooper says. He’s thoughtful when he talks about his work, like a student recalling his teachers and classes.

Cooper was also working with some of the best filmmakers in the industry, including David O. Russell–who directed him in Silver Linings Playbook and American Hustle–and Clint Eastwood, the first person who approached him about remaking A Star Is Born. But it took several years after that initial conversation for Cooper to be willing to take the helm as both director and star. “I’ve always known I wanted to direct,” he says. “Always. So it was about facing the fear of doing it. I said by 40 if I haven’t taken a shot, shame on me.”

When we’re talking about his craft, Cooper is measured, but he opens up as we turn to topics like the #MeToo and #TimesUp movements. “The potential for one of the major veins of culture, which is misogyny and patriarchy, to be shattered, is a f-cking miracle,” he says. And he’s as effusive in his praise of Gaga, whom he calls by her given name, Stefani–as she is about him.

“From the moment we met, I felt a kindred spirit in him,” she says. “And as soon as I heard him sing, I stopped dead in my tracks. I knew he could play a rock star. Actually, he’s the only actor on the planet who could play this one.” The way Cooper puts it, it was a mutual leap of faith. “She entrusted me with giving herself so she could reveal herself to be the actress that she is,” he says, “and I entrusted her that I would be able to become the musician that I was terrified to be.”

It was a big swing, but the movie works in large part because they’re credible together: Cooper as a past-his-prime roots-rock superstar and Gaga as the young woman he sees singing “La Vie en Rose” in a grungy bar when he stumbles in drunk after a gig. Their romance blooms, and soon he’s pulling her up onstage to perform in front of thousands of people. She’s insecure, but when she starts singing in front of the crowd, it’s an electrifying and raw moment. “I love her so deeply,” Cooper says now of Gaga. “It’s because we were at our most vulnerable together.”

Vulnerability is an idea that comes up a lot when Cooper is talking about A Star Is Born: You can see him, as both storyteller and performer, mining some deep pain to make this movie. Jack is an alcoholic–Cooper, who has spoken in the past about his struggles with substance abuse, is now sober–and the character’s painful descent into addiction has the texture of someone who’s lived it firsthand. “Two things had to be bulletproof: I wanted musicians to see this movie and go, ‘Holy sh-t, it’s real,'” he says. “And I wanted anyone who’s gone through addiction to go, ‘Holy sh-t, that’s the way it is.'”

For Gaga, her character’s story wasn’t exactly autobiographical, but she still connected to it. “When I wanted to be a musician, I hit the ground running,” she says. “I was banging down every door I could, dragging my piano around New York trying to get people to listen to what I had to say.” Her character, she says, has already been beaten down by the music industry for her looks: “I had to go back even further, to my teenage years, where I was bullied in high school and felt not pretty enough.”

Cooper insists he didn’t set out to make a movie about fame, which isn’t a subject that interests him much personally. “It doesn’t feel like I’m in some weird hyperreality,” he says. “I live a very normal life.” But he’s been in the public eye long enough to know that fame, as he puts it, “creates a rhythm to life that’s unique. And that rhythm is like …” He stretches his hands apart and makes a whooshing noise with his breath and then pulls them back together. “Anybody that has to do something public–there’s just so much energy. And then it’s private. That’s a conundrum, having to equalize yourself spiritually and emotionally. Because you’re so high and then you’re not.”

There’s a lot of that energy–the crazy fame energy–in the room a few weeks later at the Los Angeles premiere. When Gaga enters the theater to take her seat, something ripples through the crowd like a shudder. There are gasps and shrieks. During one scene of gravely serious conflict between Cooper and Gaga that culminates in a vulnerable moment, a man in the audience screams, “YAS!”

At the after-party, a swarm of people surrounds Gaga as she works the perimeter of the room, like dozens of planets orbiting a sun. Necks crane and people lift their phones over their heads, trying to capture a glimpse of her. Cooper’s off to one side, chatting contentedly. They both look happy–and why wouldn’t they be? They pulled it off: She’s a real movie star. He’s a real filmmaker. And now, just like that, they’re giving it away. 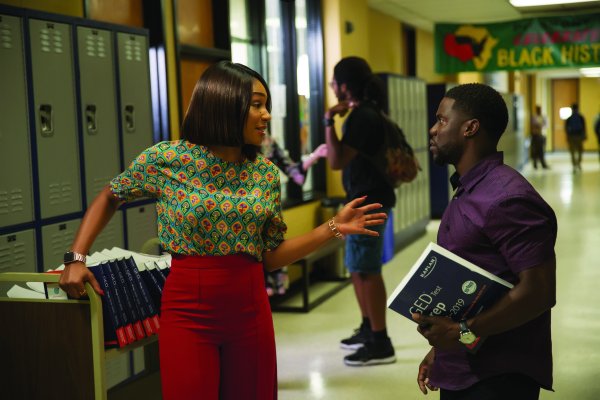 Only Tiffany Haddish Could Make Night School Worth Watching
Next Up: Editor's Pick