With his approval levels sagging and negotiations dragging on his signature infrastructure and social spending bills, President Joe Biden is bringing his pitch directly to the American public in an effort to press Democrats in Congress to come to a deal.

Pacing Baltimore’s Center Stage theater Thursday night during a town hall moderated by CNN’s Anderson Cooper, Biden brought Americans deeper into the negotiations than he ever has before, laying out details of his discussions with the two holdout Democrats in the Senate, Joe Manchin of West Virginia and Kyrsten Sinema of Arizona.

It turned a harsh public spotlight on the two Democrats holding up his domestic agenda and marked a forceful new phase of Biden’s own involvement in the process.

Until this week, Biden had largely taken a soft approach with Manchin and Sinema as they balked at the proposed $3.5 trillion price tag for a bill that could include authorized paid family leave and expanded healthcare and childcare provisions. But on Thursday, the President used his bully pulpit to broadcast the two lawmakers’ negotiating positions. Biden said Manchin has pushed back on measures that would penalize coal production in his home state. Biden is working with Manchin to divert funds instead toward incentives for solar, wind and battery storage that could foster innovation and reduce carbon emissions by driving consumers to cleaner energy sources over time. “Look, Joe’s not a bad guy,” Biden said. “He’s a friend and he’s always at the end of the day come around.”

Sinema has chafed at raising corporate taxes, and Biden said he’s trying to convince her to support a plan to make sure that corporations that currently pay no tax would pay at least 15% in federal tax. Sinema supports Biden’s climate proposals, he said, but so far she isn’t on board for a “single penny” of tax increases on the wealthy or a corporate tax hike.

Biden is working to get two major pieces of legislation passed through Congress. One would spend about $1 trillion to fund upgrades to bridges, roads, water pipes and expanding broadband Internet cables. The other would invest in increasing access to medical treatment, childcare and climate change initiatives. Democrats have struggled for weeks to come to an agreement on a framework for the latter bill, and the first has been held up alongside it as party leadership vowed to pass both together. Getting the massive spending bills to his desk is “all about compromise,” Biden said. “Compromise has become a dirty word, but bipartisanship and compromise has to still be possible.”

Negotiations are ongoing. Democrats are considering a proposal that would provide hundreds of dollars in vouchers for dental care as part of a push to expand Medicare coverage, Biden said. But he also acknowledged Thursday night that some proposals may fall out of the bill entirely, including his proposal to fund free community college. But First Lady Jill Biden is an educator, and Biden said he’d keep pushing for the community college provision: “I’m going to get it done and if I don’t, I’m going to be sleeping alone for a long period of time,” he said.

Biden pitched his proposals as a way for working families crunched by child care and medical bills to get “breathing room” in their home budgets. As he has before, he recalled how his father “worked like hell” and would come home at the end of a long day and talk about how “all I need is a little breathing room.” Biden spoke of the “sandwich generation”—people taking care of small children and elderly parents at the same time—and said he is trying to get tax breaks and cheaper health care to help families fighting rising healthcare costs and struggling to afford childcare. Biden’s effort to get businesses to give 12 weeks paid parental leave has been pared down in the negotiations to four weeks, he said. “The reason it’s down to four weeks is because I can’t get 12 weeks,” Biden said.

Baltimore isn’t Biden’s only stop to promote his agenda. On Wednesday, he spoke in his childhood home of Scranton, Pennsylvania. On Monday, he will fly to Newark, New Jersey to talk about the social spending bill and the bipartisan infrastructure bill that includes funding for more than $10 billion in New Jersey projects and would advance the long-planned Gateway Tunnel under the Hudson River. Biden will headline a rally for Democrat Terry McAuliffe, locked in a tight Virginia governor’s race widely seen as an early referendum on Biden’s job as President, in Arlington on Tuesday evening.

If Democrats can reach an agreement on the infrastructure and social spending bills, Biden could turn the power of his office to other goals. As he’s worked on those massive spending packages, two other major initiatives Biden campaigned on—strengthening voting rights and curtailing police brutality—have languished. During one question from the audience, Biden was challenged directly to respond to Black voters who feel let down by his inability to move those issues forward. Once the spending proposals are done, Biden said, he will get “deep into my ears” on addressing police brutality and voting rights.

Biden went further on Thursday night than he has before saying he would be open to Democrats eliminating the filibuster, which would allow them to pass bills with a simple majority, on voting rights “and maybe more.” 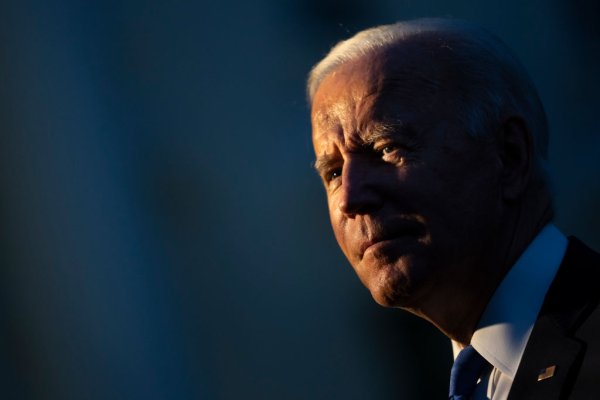 Democrats Struggle to Keep Faith in Joe Biden During Spending Negotiations
Next Up: Editor's Pick