U.S. President Joe Biden speaks to reporters as he arrives on the South Lawn of the White House October 15, 2021 in Washington, DC.
Drew Angerer—Getty Images
By Brian Bennett

As Democrats try to reach a deal on trillions of dollars in spending for infrastructure and social programs, some involved in the process are growing impatient and struggling to keep faith in President Joe Biden’s talk-it-through approach.

Biden spent the day Tuesday meeting with key players from the Senate and the House. In a meeting with House progressive lawmakers, Biden said his top line demand for the raft of health care, child care and social programs had gone down from $3.5 trillion to below $2.2 trillion. To get to that new figure, Biden is open to curtailing his plans for free community college, limiting some climate spending and shortening the time frame for some federally-subsidized family services.

But the main roadblocks to a deal remain: namely, Senator Joe Manchin and Senator Krysten Sinema, the West Virginia Democrat and Arizona Democrat who have held up the larger bill for weeks and haven’t agreed to a path forward without the House first passing the $1 trillion bipartisan infrastructure bill. Illinois Senator Dick Durbin told reporters on Capitol Hill Monday that the mood among the Democratic senators was “anxious.”

“Everybody’s very deflated right now,” says a Democrat close to the negotiations. “It is very hard to find anybody who thinks this current moment is being handled well.” There is growing frustration that Biden and Senate Majority Leader Chuck Schumer are treating Sinema and Manchin “with kid gloves,” the person says, and that Biden is “putting no pressure on them.” “How badly do they want this to happen? Because it really doesn’t look like they’re breaking anybody’s arms,” the person says.

Outwardly, negotiators have said there’s been progress in the past few days. On Tuesday, Sen. Bernie Sanders of Vermont, who has been pushing to keep the investment in social programs high, had a meeting with Manchin and told reporters that there is “growing sentiment” that the time has come to find a resolution. Schumer told reporters on Wednesday that the Democrats are “getting closer to an agreement” and that he believes they can “get it done.” Schumer has asked Democrats to put together the framework of an agreement by the end of the week that would allow them to move forward on both bills.

But the major players’ positions have not changed significantly from the moment in late September when Democrats blew past a self-imposed deadline to pass the bills. Manchin says his top figure for investing in health care and child care programs is $1.5 trillion and he’s opposed to some of the initiatives progressives and Biden want to address climate change. Sinema remains an obstacle on the size of corporate tax hikes that pay for the cost of social programs. There is no sign Biden has been able to move the two Senate holdouts, despite Biden’s decades-long career in the Senate himself and his personal relationship with Manchin.

Through the entire process, Biden has barely used the bully pulpit of the presidency to try to sell the bills to the public or put external pressure on lawmakers. Biden hasn’t sat for an interview with a major media organization since the beginning of September, and has only done 10 total since becoming President—far short of the pace of interviews conducted at this point in their presidencies by Barack Obama and Donald Trump. Biden’s approval ratings have sunk below 50% since August, as he bore the brunt of his chaotic withdrawal from Afghanistan, public perception of his response to the COVID-19 pandemic dipped, and the infrastructure and social spending bills—cornerstones of his domestic agenda—have remained mired in intra-party debates.

“He’s got a remarkable opportunity here to leverage himself and the office, and it just seems like it’s slipping away,” says a former Biden Administration official who is advising the White House on the negotiations.

Perhaps in an effort to reverse these trends, Biden is taking to the road this week to promote the two bills. On Wednesday, he’s visiting his childhood home Scranton, Pennsylvania—a campaign touchstone for Biden when he wants to highlight his family’s working class roots. On Thursday, he will answer questions from an audience in Baltimore about his plans on the two infrastructure bills in a “town hall” event broadcast by CNN.

Within Washington, much of the outreach to the Hill has been handled by Biden’s staff. Biden is on the phone regularly with lawmakers and has been holding meetings with them. But the most frequent contacts between the White House and senators have come from White House chief of staff Ron Klain through calls and text messages, according to two people familiar with the discussions. Biden’s director of legislative affairs Louisa Terrell, a former chief of staff to New Jersey Senator Cory Booker and a veteran of Obama’s legislative affairs office, keeps in close touch with key Senate chiefs of staff. But “there’s no weight that’s the same as the actual President,” says the former Biden Administration official.

Sen. Tim Kaine of Virginia told reporters Wednesday he’s hopeful that by the end of this week, Democrats in the Senate will have reached a framework agreement on the larger social spending bill, which will be sufficient to convince House Democrats to pass the bipartisan infrastructure bill and send it to Biden’s desk.

It’s a big lift. Biden has told lawmakers he wants to get the outlines of an agreement done before he leaves for the G20 Summit in Rome and a major climate conference in Glasgow late next week. He’s hoping that he can tell allies abroad about major steps the U.S. is making to reduce carbon emissions and limit the damage of climate change. To get there, Biden told House progressives that tuition-free community college may be dropped from the spending package, that the child tax credit might not be extended for more than one year, and programs to improve home health care could be dialed back, according to a Hill aide briefed on the talks.

Biden needs to exert his leadership to keep House progressives on board without losing Manchin and Sinema in the Senate. This week, progressive Democrats seem to be willing to restructure their demands to provide assistance to working families for a shorter period of time than they had originally hoped. “We need to invest in as many of those transformational areas as possible, even if it means for some of them a shorter amount of time,” Rep. Pramila Jayapal of Washington, leader of the Congressional Progressive Caucus, told reporters at the White House on Tuesday. On climate change measures that Manchin opposes, Jayapal said progressives are hopeful they can reach an agreement that will still be “significant.”

Biden is central to all of those discussions. “The President is the inspirer. He is the closer. He is the convincer, the mediator in chief,” Jayapal said. The coming weeks will show if President Biden can live up to those monikers. 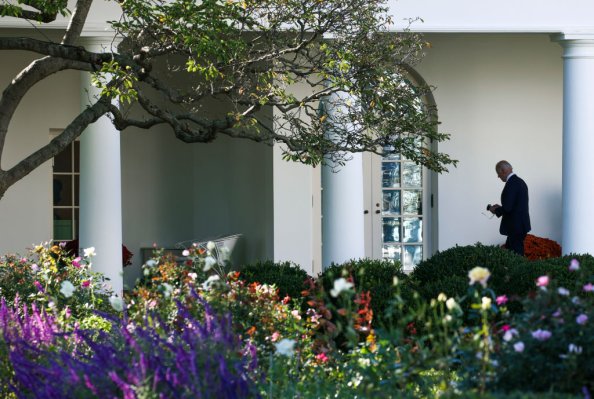 Biden May Let Congress Have More of Trump's Jan. 6 Records
Next Up: Editor's Pick