What Democrats Need to Learn from Youngkin's Win in Virginia

If the cornerstone of your electoral strategy is proclaiming that you’re the antithesis of Donald Trump, it helps to actually have Trump on the ballot.

Absent that, as Democrats saw on Tuesday in Virginia, you’re running a campaign against a specter. And while ghosts are scary, they aren’t real.

Terry McAuliffe, the Democratic candidate in Virginia’s gubernatorial race, and his allies did everything they could to link Republican rival Glenn Youngkin to the ex-President. Even the state Democrats sent mail in the last week promoting Trump’s praise of Youngkin. By Election Day, seven in 10 Virginia voters told The Washington Post that Youngkin’s ideas were similar to Trump’s and voters were four times as likely to vote against Youngkin as for him based on Trump’s endorsement.

But Youngkin smartly seemed to keep Trump at arm’s length during his campaign, even while doing little to silence Trumpist pet paranoias on how schools teach history, explain race and assert without evidence that the 2020 election was stolen from the 45th President. Trump was definitely a drag on Youngkin, but Joe Biden proved worse for McAuliffe. By a slight margin—28% to 20%—more voters told the exit pollsters that they voted to demonstrate their opposition to Biden than to have his back. That move was in full view among white women, who voted for Biden over Trump by a 50-49 margin last year and sided with Youngkin over McAullife by a 57-43 rate—a 15-point swing in just one year.

After hours of a tight count, The Associated Press called the race for Youngkin at 12:37 a.m. With more than 95% of the votes counted, Youngkin was leading with 50.9% of the vote to McAuliffe’s 48.4%.

Virginia’s political shift in recent elections has been one of the most dramatic in the country. The former capital of the Confederacy last elected a Republican Governor in 2009, in large measure as a rejoinder to Barack Obama’s wobbly first year in office. Democrats in the state subsequently got their acts together, in large measure through the leadership of Mark Warner and Tim Kaine who are these days the commonwealth’s Democratic Senators and former Governors. McAuliffe won the governor’s mansion in 2013 on his second attempt and Democrats held it in 2017 as a symbolic check on the new Trump team. Biden would go on to win the state last year by a whopping 10 percentage points.

But the headwinds this election cycle were too much, both locally and nationally. Youngkin deftly tapped into voters’ unending anxieties about schools reopening, mask mandates and lessons on racism, turning education into a defining issue in the contest. His subtle dog whistles became roars as he weaponized fears about critical race theory, an academic framework that is not used in Virginia’s K-12 schools but, according to the right-wing echo chamber, has invaded every lesson in the commonwealth.

Democrats did themselves few favors. McAuliffe, a partisan animal as rabid as ever known in current politics, stepped in it when he declared from a debate stage that “I don’t think parents should be telling schools what they should teach.” It allowed education to briefly overtake the economy as voters’ top worry. In Tuesday’s exit polls, a shocking 24% said education was the most important issue facing the state. By contrast, education wasn’t even an option when the question was asked of Virginians on last year’s exit poll.

McAuliffe hammered relentlessly on Youngkin’s similarities to Trump but forgot to remind voters that the four years of the McAuliffe administration were pretty good for Virginia families. He also committed what is perhaps politics’ most grievous sin: he told the truth when he acknowledged that Biden was unpopular in the state and may be a drag on McAullife’s own hopes of becoming the first Democrat to be twice elected Governor of Virginia. (One previous Governor completed the comeback, but switched parties in his time from power.) Of the 13 Presidents dating to Harry S. Truman, Biden has a lower job-approval rating at this point in his presidency than all but Trump and Gerald Ford.

National Democrats, too, made some crucial missteps leading into Election Day. A nationalized recall in California was an early drain of attention and resources; anti-recall efforts spent more than $34 million—cash that might have been directed into Virginia. In Washington, Democrats have hemmed and hawed about infrastructure spending bills. Democratic strategists had warned the White House and lawmakers that leaving the proposals listless heading into Virginia’s elections would leave the party rightly open to criticism that it was directionless and lilting. Well, even as polls were open, Democrats continued to negotiate on the details, reaching a deal on prescription drug pricing inside legislation ostensibly meant to deliver roads and bridges.

McAuliffe also spotted this peril. Three weeks ago, in a typically blunt interview, McAuliffe told The Associated Press that Democrats—including Biden—needed to “get their act together” and pass the infrastructure package. But despite recognizing their folly, Democrats balked. And now they’re heading into next year’s midterms with the most unenviable label: Losers.

Virginia’s off-year elections offer something of a preview of what’s to come in next year’s traditional midterm races that will feature all 435 House districts, 34 Senate seats and 36 Governors’ offices. It’s really the one test for both parties to check in with a real electorate and take the temperature a year into a new presidency. Judging from crucial counties that have the biggest chunks of votes, McAuliffe wasn’t able to match the margins that Biden posted against Trump—a warning that while 54% of Virginians carry an unfavorable view of Trump, some 17% of those who don’t care for Trump were still willing to vote for Youngkin, according to the exit polls.

On their own, the Virginia results don’t offer a prediction, but the information is nonetheless instructive. For instance, Tuesday seems to have indicated the blue bleed into the suburbs, mostly powered by women disgusted by Trump, may be slowing. The gains Democrats made in the Virginia ‘burbs in 2018 and 2020 appear ready to disappear, perhaps a warning for a party that had hoped to turn those voters into reliable allies in the post-Trump years. The exit polls showed independents leaning more toward Republicans in Virginia, with about one-third saying the GOP was generally about right, compared to about one-fifth of them saying the same about Democrats. That’s undeniably bad news for Democrats, whose party was seen by a majority of all voters as too liberal.

Back in Washington, the results are likely to bring their own ghoulish realities. Democratic lawmakers were already skittish about their own prospects next year. A McAuliffe defeat, at least in part based on a bill that hasn’t even been passed, is sure to rattle legislators who may interpret the voters’ wrath as a rejection of the party’s current agenda. And party strategists, who in private were already conceding that 2022 was going to bring plenty of tough choices about where to defend incumbents and where to cut losses, now have their first report card of the Biden era in hand.

So when Biden lands back here in a few hours after his trip to Europe, he will be confronting a markedly different domestic political landscape than he left behind last week. His ambitious social-spending Build Back Better agenda remains stuck in a legislative back and forth. Progressives and moderates continue a standoff on a companion piece of a spending bill for hard projects like airports and railways. And a setback just across the Potomac River is sure to haunt Democrats who had until recently expected Virginia to continue its slide to the deep blue. After all, a Southern state that has since 2019 acted to abolish the death penalty, protect abortion rights and curb guns now has a Governor-elect who embraced Trumpism as a winning platform. But without Trump himself on the ballot, the ghost wasn’t enough to spook Virginians. 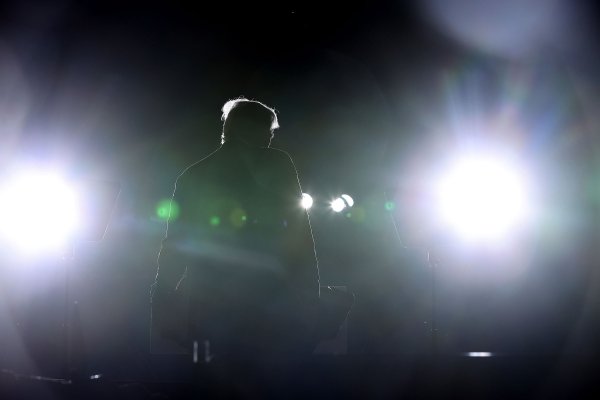 The Big Lie Has Been Proven False. Republicans Can’t Shake It
Next Up: Editor's Pick