The Disempowering Experience of Flying as a Disabled Person

I am the youngest daughter of a man who paid his way through college working 50 hours a week, replacing sleep with sheer grit. He raised six kids and still woke before dawn for his morning prayer walk. He’s tough and intentional and has a strong sense of personal responsibility. Our conversations on anything from health care reform to paid maternity leave rarely get far. “It would be wonderful if we could solve everyone’s problems, but life is hard,” he often says. “And hard doesn’t have to be a bad thing.”

His words – “life is hard” – came back to me as my partner Micah and I prepared for our first plane ride with our toddler Otto. They circled my brain as I tried to organize my thoughts for the talks I’d be giving to college students when we landed. Because commercial airplanes and their bathrooms don’t accommodate wheelchairs, I generally prefer driving a longer distance to avoid even a short flight. But Micah and I couldn’t afford to take off work for a 22-hour road trip, so our only option was to fly with our 16-month-old, a nerve-wracking proposition even when one parent doesn’t rely on a mobility aid.

Read More: A Partner With Cancer, a New Baby and a Pandemic: How I Learned to Live in a Tangle of Joy and Pain

I started restricting fluids the night before our trip to make sure I wouldn’t need to use the restroom during our flight. The next morning Otto sat in my lap glaring at everyone as we cruised through the terminal, crumpling my boarding pass in his dimpled fist. When we arrived at security, Micah lifted Otto off my lap and the two of them made their way through the metal detector while I waited, like I do anytime I fly, to be courteously felt up by an airport security officer.

I watched as another officer pulled Otto’s stuffed dinosaur, Puppy, out of his toddler clutches so they could scan its fluffy body, and even after my family was out of sight, I could still hear Otto’s howling. The officer conducting my one-on-one screening warned me each time she moved her hands up my inner thighs, under my breasts and along each butt cheek. A series of small, familiar indignities, uncomfortable and indisputably professional. I took each in stride, my father’s daughter.

Micah held Otto again as I transitioned onto the plane. I’m always given a choice to be pushed to my seat in a narrow rolling aisle chair, an exercise that makes me feel like a child being carted along on a sad parade float while people watch solemnly from the sidelines. This time my legs were cooperating, so I opted for a labored, independent shuffle to row eight. As we tucked into our seats, Otto and I watched as the baggage handlers whipped my wheelchair onto the conveyor belt, one wheel still spinning until it disappeared under the plane.

Flying has always felt disempowering, but this was the first time I needed to operate as a mother at the same time. While I knew there were parents who did it solo, I couldn’t fathom doing any of this without Micah. I kept imagining Otto darting toward the exit as soon as we landed while I sat stuck on the plane, waiting for someone to bring back my chair. I wondered if anyone in charge saw how helpless the airline had made me, or if they assumed helplessness was built into my very body. How can you take power away from someone you already deem powerless?

Life is hard. Of course it is. The piece that’s more puzzling to me is sorting through the different layers of hard. What parts of life are inherently, unavoidably hard? What challenges are my individual problems to fix, and what messes remain our collective responsibility? When do we concede to life’s inevitable roughness, and when do we push to smooth out the edges?

When I hear conversations about making airplanes accommodating, it feels like there’s a general, sympathetic shrug – it’s rough, but what can we do about it? Wheelchair users make up such a small population! I hear. And, of course wheelchair users should have equal access, but we have to be reasonable. And, maybe you should be grateful you can fly at all! There was a time when airlines could turn you away.

It wasn’t until the end of 2018 that airlines were required to report the number of mobility aids lost or broken under their watch. Since then, the largest airlines have reported more than 15,000 incidents – a number assumed to be underreported and lowered by the pandemic’s toll on traveling. Now social media allows us to witness the personal stories behind the numbers, to see the vulnerability and havoc brought about by the specific losses. Millions of people watched Bri Scalesse’s viral TikTok video recording her best friend’s sobs when her wheelchair was broken on a flight this summer. Nearly half a million watched Shane Burcaw’s YouTube video capturing the helplessness he and his wife Hannah felt when his wheelchair was returned to him malfunctioning.

Read more: To Fix America’s Broken Health Care System, We Must Rethink Who Counts as an Expert

I didn’t have access to these numbers or videos for most of my life. I’d always imagined the ritual of dehydration, degradation and vulnerability was my personal plight, but a recent survey found that 43% of wheelchair users who’ve attempted to fly now avoid it, and not because they have nowhere to go. I’ll never forget when I landed in Detroit for a weeklong symposium a few years ago and the airline couldn’t locate my wheelchair. Had they sent it to another city? They weren’t sure.

I sat in a giant airport loaner with a lump in my chest, waiting and at their mercy. After one terrifying hour, they tracked down my chair – a relatively small inconvenience compared to those whose fears of a lost and damaged wheelchair regularly become a reality. A loaner might work for a short stroll, but many wheelchairs are designed for their users’ unique shapes and needs; for me, too much time in a loaner can trigger debilitating back pain, increased leg spasms and skin breakdown.

The three-hour flight this fall was a marathon of two desperate parents scrambling to create another 15-second burst of distraction to stave off an apocalyptic toddler meltdown. By the time we landed, my lips were cracked, my tongue fuzzy from thirst, my strength to parent depleted. Even so, my chest opened with a sigh of relief when I saw my wheelchair waiting just outside the plane entrance – intact, familiar.

As I sank into the hotel bed that night, my tight leg muscles finally unfurling, I thought about my dad’s maxim. Traveling with a toddler, juggling a career and parenthood, flying when you use a wheelchair – all of it is hard. But lying there in the dark as Otto wiggled in the pack ’n play a few feet away, it dawned on me how slow the world has been to imagine someone like me as a participant.

When commercial air travel took off during the mid-20th century, so many wheelchair users were still trapped at home or in institutions, isolated and made invisible by a largely inaccessible world. There was no legislation in place that required a space to accommodate a wheelchair. That meant banks, schools, government buildings and businesses, buses and trains, sidewalks, parking lots and public restrooms were largely off limits. Even the transformative Americans with Disabilities Act of 1990 does not apply to air travel. Airlines have yet to catch up to the fact that there are millions of people traveling in wheelchairs, and that this number continues to grow with every passing year.

Read More: I’ve Been Paralyzed Since I Was 3. Here’s Why Kindness Toward Disabled People Is More Complicated Than You Think

I am my father’s daughter. I am scrappy and work hard and don’t gripe. I also grew up disabled. I learned to make jokes and smile and go with the flow, even when I’m made small by an inaccessible world. It’s a tool I have. Still, as I’ve gotten older, I’ve started to see how often I’m expected to use it – as if the ability to roll with the punches doesn’t come with a cost, or the capacity to keep my chin up means there isn’t really a problem. Right now, even when it goes well, flying with a wheelchair means signing an invisible contract that says you agree to give up your dignity, autonomy and independence for the duration of the experience if the airline will let you onto the plane with everyone else. Travelers in wheelchairs have carried the burden of this setup for a long time, but none of us should have to.

Accommodations are almost always considered “unreasonable” until they’re actualized, at which point almost everyone, regardless of disability, appreciates them. Consider how often we all rely on and enjoy video captions, audiobooks and curb cuts. Before the pandemic, disabled people were told time and time again that telehealth and working remotely were impossible. And here we are. We’ve witnessed, firsthand, how quickly and dramatically we can change.

Who else would benefit from rethinking air travel? People in larger bodies or bodies in pain? People traveling with children? What if accommodations weren’t reserved for extraordinary circumstances? What if we took this moment of rebuilding to listen to the ones on the edges experiencing the brunt of our inadequate systems and used their insights to make those systems work better for all of us?

I realize there is not a simple fix. Like a lot of messes in the world today, making planes truly accessible will require expertise, collaboration, dedication, money and time. But I also think we are up to the challenge. In fact, you might be surprised to learn that the technology to safely secure a wheelchair in a plane is already well underway, thanks in no small part to the efforts of Michele Erwin, a mom with a son who uses a wheelchair. While working her full-time job at JCPenney, Erwin spearheaded All Wheels Up, a nonprofit that crash-tests wheelchairs to make commercial flights accessible. There is still so much work ahead – so many more people who need to get on board – but Erwin’s tenacity has already sparked more progress in accessible air travel than we’ve seen in decades. She has the kind of fortitude I think my dad would admire.

Life is so hard, isn’t it? We are tied to bodies that are inherently vulnerable to viruses, disease and injury. We can’t program our children to behave like pleasant little robots or force our family to see the world the way we do. There’s so much outside our control. That feeling can make us want to turn inward – to prioritize our own momentary survival. But when we do that, we cut ourselves off from our greatest tool for long-term survival: each other. We are quick to expect individuals to toughen up, but I wonder about a collective toughening up. Because together we are capable of making this whole place so much better – kinder and more inclusive. It might be hard, but hard doesn’t have to be a bad thing. 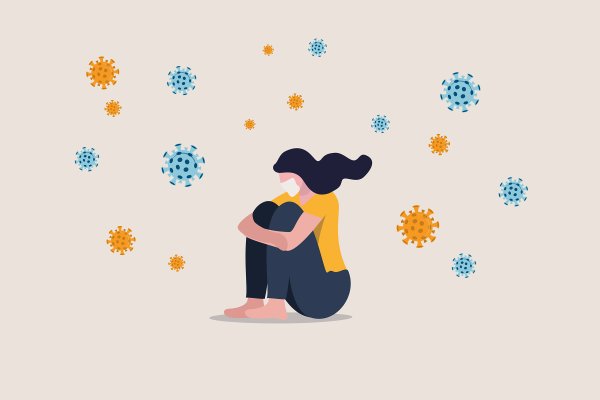 Anxiety Feels Terrible, But It Has an Upside. Here's How to Make It Work in Your Favor
Next Up: Editor's Pick