Remote Work Is All Gen Z Knows. But Are They Satisfied?

Lizzie Schmidt has never worked in a real office, had her own desk or been to a happy hour with colleagues. At 22 years old, the Greenwich, Conn., native and recent graduate of Elon University is part of a generation of newly-minted workers taking their first steps into the working world virtually. And while more established office workers debate returning to their desks, this youngest generation has no point for comparison.

One recent survey from Slack suggested that as few as 12% of workers want to return to the office full-time; another from Citrix, looking at Millennials and Gen Z workers specifically, estimated that 51% wanted to remain working from home the bulk of the time. Meanwhile, a different poll from research firm Generation Lab showed that as many as 40% of college students and recent graduates would actually prefer fully in-person work. And another survey from workforce engagement platform Ten Spot showed that only 30% of Gen Z wanted to stay remote full time, while 34% said they were “more productive and engaged” when working from the office. This confusion over what the workforce’s newest employees want—and the tension with more established workers—shows how complicated work’s place in our lives has become, especially for Gen Z as they settle into their new roles.

“Humans are social creatures,” explains Sammy Courtright, co-founder and Chief Brand Officer at Ten Spot. Ten Spot’s surveys have, to some surprise, shown that Gen Z attitudes often closely match Boomers when it comes to the office. “For Gen Z workers, some of the most exciting perks about a job are the company culture, socializing with coworkers, and finding a mentor they really connect with,” Courtright says. Without those expectations met, young workers may struggle to remain engaged. “Taking away the traditional office setting is a bit like being inside a snow globe when somebody’s shaking it,” she says, “it’s hard to tell how and when everything is going to settle into place.”

Comfortable remote, but ready for the office

Schmidt started working at Signify Health as an intern in the summer of 2020, a fully remote position as the pandemic swept the world. She was asked to consider returning full-time after graduation, beginning a role as a part-time contract employee during her senior spring semester. When she graduated, she signed with them as a product management analyst. She was able to go in to the office in New York City one time this summer, meeting her VP and old manager in person for the first time more than a year into the job. “It’s so weird, having a relationship with someone [online] and they’ll just be like, Oh, you look very different than I anticipated!” she remembers. “I was a bit afraid for it; it was weirdly nerve-wracking.”

Now, still working remotely, she spends most of her day on Google Meet and phone calls. Her office has plans to return to work at some point after Labor Day, and she is ready for the change. “A lot of our work is hands-on, and a lot of our work is collaborative,” she says. “I haven’t really noticed a challenge, but I also haven’t been here long enough. But [the rest of the team] feel very siloed.” Some things would be easier in an office: learning specific shortcuts, for instance. “A lot of it is like, Can you just show me how to do this?” (Screensharing, the current approach, can be “more annoying.”) “But yeah, you get used to it, I guess,” she says.

Her department is considering a three-days-in, two-days-out hybrid model, which Schmidt sees as an “ideal situation.” She’s looking forward to being able to separate her workspace from her living space—and to the casual social interactions that happen during and after a workday. “I want the culture that everyone talks about, the fun office mentality,” she says. “Overall, there’s probably more excitement from younger people to go into the office than older people.” For Gen Z, who don’t have the responsibilities of families—and haven’t had the chance to live the working life they planned for and dreamed of during college—the office, as a concept, remains appealing.

In search of a creative hybrid

Melodi (who prefers to go by her first name, citing sensitivity around work), a 25-year-old Texas native and current Brooklyn, N.Y., resident, is more conflicted about her preferred working experience. During the pandemic, Melodi—a volleyball player who graduated from Texas State University with a degree in public relations—was laid off from her role with a music instrument company. She was able to secure a remote call-center job, and then an in-person one as a substitute and special education teacher and volleyball coach. But, eager to return to more creative pursuits, she found a role as a content producer and photographer for an ecommerce brand based in Georgia. While she’s constantly in contact with her small team via Flock, a Slack-like chat app, and email, some things do get lost in virtual translation. “I’m not a big fan of small talk, but sometimes it is nice. And I do kind of miss the daily check-ins,” she says. Especially when it comes to her photography, aligning on creative vision can be a challenge when everything is done remotely. “We’ve had some miscommunication. There’s nothing that beats face to face,” she says.

For Melodi, and many of her friends who are in creative industries, the pandemic has been a time of cobbling together ways to get by. Now, the perspectives have shifted. “After a year of having so much taken away professionally and socially, work isn’t just work to me anymore,” she says. “I don’t think I can just give eight hours of work just to be like, Okay, well, at least my bills are paid. I’m really after that balance of enjoying what I’m doing.” Her dream situation would be a more hybrid workplace that would involve working from home and going in to share ideas and projects in person. “Sometimes my best work will be rather spontaneous or impulsive. And that’s hard when everything is very planned and there’s not as much potential for flexibility,” she says.

In a perfect world, Melodi thinks about a coworking space like a WeWork, where many people with different jobs could come together at once in a social but productive environment. Working all the time from home—especially in a city with housing that can be cramped like in New York—won’t cut it; she’s learned from experience that the “cross-contamination” of working and living in the same small space can be difficult. In the meantime, remote work drags on. “It’s just this whole new beast,” she says. “Everyone’s just doing the best they can.”

A solution for parenting

Meanwhile in Kailua, Hawaii, Bailey Simonte is grateful that her work is fully remote—and will stay that way. Simonte, 25, lives with her husband and 3-year-old child on a military base in Hawaii, and works as an editor for a niche travel publication, which she joined in June 2020. Before that, she was a contract researcher. While most of her coworkers at her current role are based on the East Coast, the company went remote years before the pandemic. That has been a blessing; Simonte’s daughter has epilepsy, and her ability to be present for her has been critical. These days, Simonte works from a desk in her bedroom, starting at 6:00 a.m. “If I didn’t have a remote job, I couldn’t work,” she says. “And when my daughter does get sick and I have to be in the hospital, remote work gives me the opportunity to not be criticized for not being in the office.” This is a benefit that she says many young families with children share. “It seems so antiquated to me to work a nine to five at an office, and I think a lot of people are agreeing with that sentiment,” she says. Plus, since her company has had time to settle into its remote work groove, there are no notable setbacks. “Sometimes, I don’t hear from [my boss] for a few days. But I know what the expectations are. So I don’t feel like I’m left in the dust, you know?” she says. “I’ve had a lot of freedom and a lot of opportunities to grow.” It’s also given her the time to pursue a simultaneous bachelors degree online.

Still, as a self-described “social person,” Simonte can feel isolated at home, so she recently started volunteering in-person at the Navy Marine Corps Relief Society in the afternoons—just to experience an office environment for the first time in her working life. It’s been a nice addition, but Simonte knows where her preferences lie: “If I had to make a choice, I would stay remote,” she says.

Young professionals like Simonte, Schmidt and Melodi are discovering that flexibility has both perks and drawbacks. But none of them envision a future without the option to remain at least somewhat remote; after all, it’s what they know best. Simonte thinks about her dad, a Boomer, who ended up enjoying working remotely despite the learning curve of technology. “He thrived during the midst of the pandemic, because it was just him and his dog. He was so happy to just be at home with his little dog, taking middle of the day walks,” she says, laughing. “This has been a situation where maybe Gen Z and millennial workers were more aware that this was going to be a positive change. And then, finally, this was an opportunity for Boomers to also get on that same page.”

With the Delta variant delaying many office returns, the timeline for remote work continues to stretch later in the year. Still, says Courtright of Ten Spot, the bigger picture suggests these changes may not last forever. “Even though Gen Z has had access to the technology we use at work their whole lives, they still seem to have a very traditional, and even romanticized, idea of what their professional work life should be like,” she says. “Many Gen Z workers have been forced into remote work just as they are starting their careers and want in-person support and feedback.” We can’t predict the future, but the office, it turns out, may have its own allure after all.

The original version of this story misstated Signify’s return to office plans. Schmidt’s department is considering a three-days-in, two-days-out hybrid model, but the company has not yet decided on this. 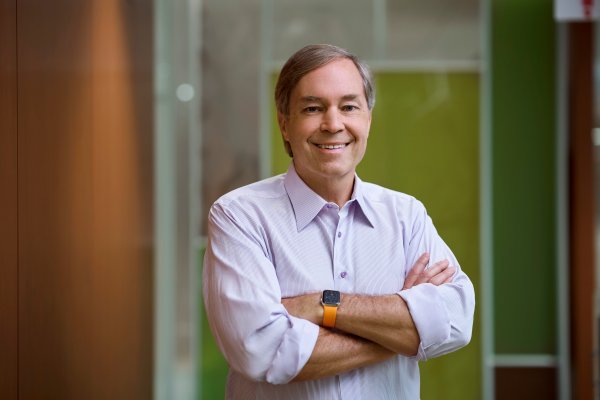 Cargill’s CEO on a Sustainable Future of Food in a Warming World
Next Up: Editor's Pick