30 Years After a Landmark Disability Law, the Fight for Access and Equality Continues

Judy Heumann remembers the day she went to register for kindergarten in 1952. She’d gotten dressed up and her mother had pulled her wheelchair up a flight of stairs before the principal intervened. Her disability, he said, meant she was not allowed to attend the school. Heumann had polio as a child, and it left her legs paralyzed and limited her use of her hands and arms. Throughout her time in the educational system, and after she graduated and became a teacher and activist, she had to fight for access at every turn.

“It’s totally different today,” she says. That’s thanks in large part to the Americans with Disabilities Act (ADA), the civil rights legislation that was signed 30 years ago this month, on July 26, 1990. Under that transformative law, schools and workplaces are now required to have ramps, elevators, designated parking spots and curb cuts, and to provide accommodations for people with a range of disabilities, including those who are blind or deaf.

Taking inspiration and legal concepts from the Civil Rights Act of 1964, the ADA was designed to protect people with disabilities against discrimination and to ensure that they can participate fully in employment, state and local government services, public accommodations, transportation and telecommunications. The results today are powerful: most public buses have lifts for wheelchairs; disabled children attend school alongside their nondisabled peers; and employers are generally aware that people with disabilities have civil rights they cannot violate.

But if the 61 million Americans with disabilities are now less likely to confront the same problems that Heumann did decades ago, their fight for true equality is far from over. “The ADA is ultimately a promise that has been tremendously impactful in some areas and has yet to be fulfilled in other areas,” says Ari Ne’eman, a senior research associate at the Harvard Law School Project on Disability and the co-founder of the Autistic Self Advocacy Network.

The majority of disabled Americans still struggle to find jobs, most affordable housing is still not accessible, and disabled Americans as a group experience much higher rates of poverty and incarceration. The ways that the ADA and other disability-rights laws have been implemented often require navigating a host of bureaucratic mazes to access support. “The ADA works in tandem with other laws,” says Claudia Center, the legal director of the Disability Rights Education and Defense Fund. “Each step needs to be made inclusive and accessible, and that’s a big project.”

The passage of the ADA was decades in the making, built on years of grassroots advocacy, campus activism and the rise of the so-called Independent Living movement, which challenged the idea that disabled people should be relegated to institutions. In the ’70s, people with disabilities won a major victory when the 1973 Rehabilitation Act banned recipients of federal funds from discriminating on the basis of disability. It took four more years, nationwide protests and a 28-day sit-in–organized in part by Heumann–to implement regulations that truly enforced the law.

“That work required that disabled people be able to come together to talk about what discrimination meant for different groups, how we as a community could be supportive of each other, learning about the forms of discrimination that we experience, learning about the kinds of alterations or accommodations that would need to be made,” Heumann says. That advocacy laid the groundwork for what would become the ADA.

In the 1980s, Justin Dart, vice chair of the National Council on Disability (NCD), traveled the country holding public meetings and collecting stories of discrimination. After the NCD drafted an initial bill, Senator Lowell Weicker and Representative Tony Coelho introduced the ADA in 1988; it was later championed by Senators Tom Harkin, Ted Kennedy and Bob Dole. Even as the debates grew contentious and lawmakers moved to exclude people with AIDS or complained the bill would be too costly, advocates stuck together. Their unity ensured that the ADA would eventually protect people with disabilities of all kinds. As President George H.W. Bush said at the law’s signing ceremony, “It will guarantee fair and just access to the fruits of American life which we all must be able to enjoy.”

After a generation of advocacy, Heumann says, the ADA felt like a “crescendo.”

But equality in theory does not mean equality in practice. Thirty years after the ADA’s passage, violations abound. Disability-related complaints remain the largest category filed with the federal agencies that enforce fair housing and employment laws, and many businesses and institutions remain inaccessible.

At a more basic level, many disabled Americans say that while the ADA guaranteed them rights, it did little to address the historical inequities that have long pushed them to the margins of society. Children with disabilities are still less likely to graduate from high school and far less likely to attend college than their nondisabled peers. They are also disciplined more often in educational settings and overrepresented in the criminal-justice system, where prisons are rarely set up to accommodate their needs.

“We have not really taken the concept of disability inclusion, of community support, of nondiscrimination and made that into programs and supports that prevent homelessness and incarceration,” says Center.

Access to employment, one of the central promises of the ADA, is perhaps most out of reach. Disabled people are still roughly twice as likely as nondisabled Americans to be unemployed and to live in poverty, and these numbers have persisted over time. While employment rates had begun improving in recent years, the COVID-19 pandemic is reversing that trend. Workers with disabilities still face both overt discrimination and implicit bias, but another part of the problem, experts say, is that the Social Security benefit programs on which many disabled people rely come with restrictive eligibility requirements that can act as work disincentives.

People with disabilities have long advocated for changes in these policies, but the rest of the country has been slow to listen. Though 1 in 4 Americans has some sort of disability, they have historically split their support between the two main political parties. Inaccessible polling places also pose a problem, says Keri Gray, who oversees the American Association of People with Disabilities’ voter-registration and civic-engagement campaign. “There’s this lack of creative thinking and problem solving that needs to happen, like, yesterday, for our country to be really effective,” she says. Gray, who is Black, also argues that advocating for disabled people’s right to vote should go hand in hand with fighting for racial justice–something the disability-rights movement hasn’t always done, she says.

Though that, too, is improving. As younger activists like Gray, who was born the year the ADA was passed, take center stage, they are bringing new, more inclusive ideas about disability rights. Ne’eman, who is writing a book about the history of American disability advocacy, says the increase in people publicly embracing their disability as part of their identity has played an important role in shaping new public attitudes.

The COVID-19 pandemic is also playing a part. With tens of millions of Americans suddenly working and attending school remotely, and thousands experiencing lingering health problems, it’s become more commonplace to think about what it means to need accommodations, rely on friends and neighbors, and depend on government support.

Gray says she is grateful for the activists who came before her, like Heumann, who passed the ADA and helped frame the battle for disability protections as a fight for equal rights. “It leaves us with this next call to action,” Gray says. “How can we continue to uplift this piece of legislation, and how can we think about what else needs to come after it?” 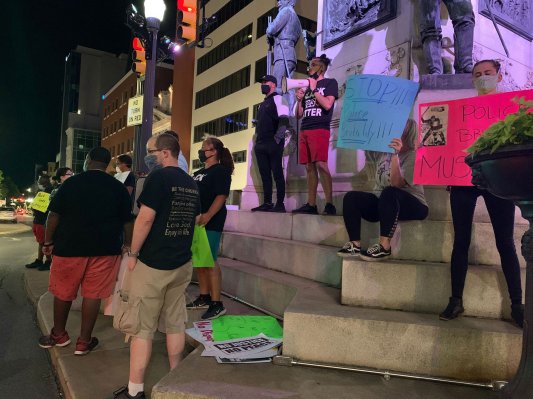 Video Of Police Officer Kneeling on Man's Neck in Allentown Sparks Protests
Next Up: Editor's Pick