Speaker of the House Nancy Pelosi (D-CA) attends her weekly press conference where she discussed the planned vote on the infrastructure bill at the U.S. Capitol on Thursday, Sept. 30, 2021 in Washington, DC.
Kent Nishimura/Los Angeles Times—Getty Images)
By Charlotte Alter and Alana Abramson

For weeks, progressive lawmakers in Congress have been threatening to sink the bipartisan infrastructure bill if they were not given certain guarantees about a larger social spending bill. And for weeks, many of their colleagues thought they were bluffing.

They weren’t. And now the fate of President Joe Biden’s agenda hangs in the balance.

Progressives claimed victory Thursday night after a planned infrastructure vote was delayed following their united front to oppose the $1 trillion bill without assurances about the fate of the accompanying Democratic spending plan. The move highlighted the growing power of leftwing Democrats, and sent a strong message to the rest of their party: You can’t get one bill without the other.

“The progressive movement has not had this type of power in Washington since the 1960s,” says Joseph Geevarghese, Executive Director of Our Revolution, a political group that grew out of Vermont Sen. Bernie Sanders’ first presidential campaign.

But the victory may be short-lived. The House plans to attempt another vote on infrastructure as early as Friday, creating another opportunity to make a deal on the Build Back Better plan. That plan, which forms the core of Biden’s domestic policy agenda, includes ambitious spending on universal pre-K, childcare funding, tuition-free community college, home health care, and climate change prevention. Democrats had planned to pass both bills in tandem, but intra-party squabbling over the size and scope of the social spending bill prevented that from happening. Thursday’s delay signaled the future of both bills will remain closely intertwined, just as progressives wanted.

The move illuminated how the newly powerful progressive movement can shape the way Biden’s agenda moves through Congress, with the power to delay or even block some moderate priorities. The progressive movement has been building in influence and organizing capacity since 2016, when Sanders’ insurgent presidential campaign breathed new life into the grassroots left. The progressive caucus has frequently threatened to withhold votes over ideological differences with more moderate Democrats, but usually failed to actually stop a major agenda item. Now, the once-fledgling progressive wing of the Democratic party has become a political force strong enough to resist the will of moderates and its own party’s leaders.

Despite Democratic leadership’s attempts to push through the infrastructure bill alone, the Congressional Progressive Caucus (CPC) vowed to withhold their votes unless they got assurances about the larger spending bill. Aides and lawmakers within the group were keeping tabs on their members’ positions to secure their ability to sink the infrastructure bill as leverage. By 9 p.m. Thursday evening, as the caucus gathered on a call to discuss the state of play, it was clear progressives had the upper hand. Less than two hours later, House Majority Leader Steny Hoyer officially announced there would not be a vote on Thursday, and the House would reconvene Friday morning.

The CPC is larger and stronger than ever before, emboldened by an organized network of leftwing organizations like Our Revolution that have been creating outside pressure on all lawmakers in the party. But CPC members were also in sync with the President, who supported the goal to pass the Build Back Better plan alongside the infrastructure bill. Aides to influential progressives said they had not been pressured by either House leadership or the White House to support infrastructure without the spending bill.

The fact that the progressive position is in line with Biden’s agenda strengthened the caucus’s resolve. That unity comes after a concerted effort by both sides during the 2020 Democratic primary to bridge the party’s internal divisions: Biden moved to the left on some issues like climate and childcare, while progressives accepted that he would never support Medicare for All. That hard-won alignment, progressives say, is why they’re fighting so hard to protect the President’s Build Back Better Plan, which includes ambitious spending on many of their longstanding policy goals.

“This is not a progressive agenda. We are fighting for the ‘build back better’ agenda, which is the President’s agenda,” Rep. Ilhan Omar, the whip of the CPC, told reporters on Thursday.

The White House and Congressional leadership have been working furiously to reach a framework that could satisfy both the progressives and moderates. “A great deal of progress has been made this week, and we are closer to an agreement than ever. But we are not there yet, and so we will need some additional time to finish the work, starting tomorrow morning first thing,” White House Press Secretary Jen Psaki said in a statement Thursday evening.

Even before the vote was delayed, incensed moderate lawmakers slammed the progressives for continuing to fuel the notion that Washington is dysfunctional. “We have to demonstrate to the American people that we can still govern in this very partisan time,” Rep. Stephanie Murphy, a moderate lawmaker supporting the infrastructure vote, told reporters on Thursday. “This bipartisan bill has a lot of good things for the American people, and so it’s well past time that Congress delivers.”

While progressive activist groups immediately circulated exuberant press releases after the delay, it’s still too early to say whether the lawmakers will continue to hold the line. But they insist that they are not holding up the infrastructure bill indefinitely, just until they get enough assurances to move forward.

“Usually [progressives] take a stand and then they get bullied into submission,” says progressive strategist Rebecca Katz. “I think it’s the dawn of a new day. Because they’ve never done this, and they’ve had a hard time coalescing and standing firm in the past, and if they do it once they can do it again.”

Write to Charlotte Alter at charlotte.alter@time.com and Alana Abramson at Alana.Abramson@time.com. 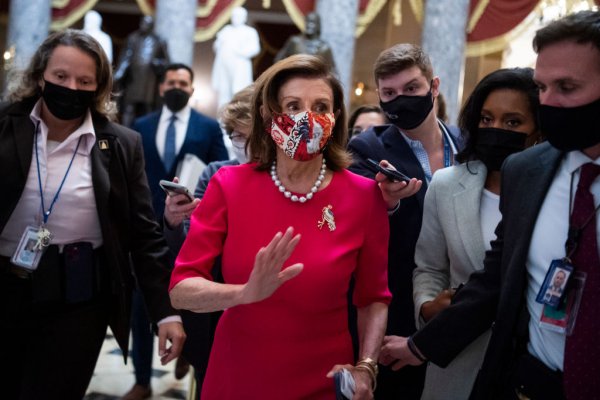 Progressives Are 'Holding the Line' for Spending Bill
Next Up: Editor's Pick