This is not how Joe Biden wanted September to go. He expected to be barnstorming the country in the closing weeks of negotiations on his signature spending plan, pitching the expansion of health care benefits and child care provisions, and driving the momentum of those popular policies to the finish line.

Instead, he’s spent weeks managing the fallout from a cascade of crises, some foisted upon him, some of his Administration’s own making. Instead of being able to focus his time and Air Force One’s flight plans on pushing through $3.5 trillion in transformational investments in the social safety net, Biden had to manage his own precipitous and deadly withdrawal from Afghanistan, the ham-fisted rollout of COVID-19 vaccine booster shots, the Border Patrol’s abuse of Haitian migrants coming to the Texas border, alarming hurricane damage from Louisiana to New York, historic wildfires in the American West, and a diplomatic tussle with America’s long time allies in Paris over the U.S. sale of nuclear-powered submarine technology to Australia.

And there are more crises looming on the horizon. Without congressional action, there could be a government shutdown at the end of the month and a default on the U.S. debt.

“What I had hoped I’d be doing is—I’d be doing what I did in the campaign—I’d be out making the case about what my planned proposal contained,” Biden said in the White House State Dining room on Sept. 24. “It’s been very much curtailed by a whole range of things.” He took questions from reporters after laying out his Administration’s efforts to get more Americans vaccinated and when to get a booster, amid confusion about expansive guidance from the White House and more restrictive recommendations from expert panels at the Centers for Disease Control and Prevention (CDC) and the Food and Drug Administration (FDA). Biden said his economic plan is “popular,” an assertion that is backed up by polling. “But the problem is with everything happening, not everyone knows everything that is in my plan,” Biden said.

That’s what makes the coming days and weeks so crucial for Biden. The outcome of his legislative push will determine how his presidency will measure up to the yardstick he himself established: proving that government can work to solve Americans’ problems. How he delivers on that fundamental promise will not only impact the country’s verdict on Democrats’ rule in the midterm elections next year, but also views of the U.S. abroad. Biden himself has repeatedly framed the challenge of his time as a struggle to prove to autocratic regimes that democracies like the U.S. work better at meeting the needs of their people.

Biden in recent days has ramped up his involvement in the negotiations about the infrastructure bill and the larger budget bill in Congress. The two bills represent the core of his domestic agenda: the former would invest $1 trillion in repairing the country’s physical infrastructure, and the ladder would expand healthcare, childcare and community college, and authorize paid family leave. Biden spent hours on Wednesday meeting with congressional leaders and two separate groups of lawmakers from the moderate and progressive wings of his party, including two Senate holdouts, West Virginia Senator Joe Manchin and Arizona Senator Kyrsten Sinema. House Speaker Nancy Pelosi said her party is ready to push forward with voting on provisions next week, but the fate of the deal is still uncertain.

“Making policy is messy, so we’re right in the middle of that,” White House Press Secretary Jen Psaki told reporters the day after the meetings, on Sept. 23. Biden is stepping in to the negotiations even while fielding challenges on the multiple other domestic and international fronts. “We’re in the middle of navigating and weathering storms and dealing with crises. That’s what a President should do. That’s what an Administration should do. We’re not going to shy away from that. And that’s what people elected him to get through,” Psaki said.

Within the past six weeks, as negotiations began to hit turbulence in Congress over how to pass the two bills, Biden suffered a series of other setbacks. The capital of Afghanistan fell to the Taliban on Aug. 15, and within 11 days, 13 U.S. service members were killed and the Taliban had taken control of the government. Expert panels at the FDA and CDC disagreed with Biden’s plan to extend COVID-19 vaccine booster shots to anyone over the age of 16 as the Delta variant surges, and instead boosters will be recommended for the elderly, people with underlying conditions, or people who work in high-risk settings. France’s foreign minister called Biden’s decision to share nuclear submarine technology with Australia— which caused Australia to scrap a multi-billion-dollar conventional submarine contract with France— a “stab in the back,” and briefly recalled France’s ambassador to Washington. Images of Border Patrol agents on horseback chasing down Haitian migrants crossing into Texas circulated this week, prompting outrage and questions about the Biden Administration’s decision to force planeloads of Haitian citizens back to Haiti. The images were “horrible,” Biden said on Friday, and promised that the agents will be disciplined.

The President’s approval is already taking a hit. Biden’s approval ratings, which held steady during his first several months in office, have dipped below 50% after the botched withdrawal from Afghanistan and the surge in coronavirus cases. An Ipsos poll released Sept. 23 showed that 44% of Americans approved of how Biden’s handling the job and 51% disapproved, a reversal from where Biden’s approval rating stood at the beginning of August.

Even with his sagging numbers, support for Biden’s proposals to dramatically expand health care and family support safety nets has remained buoyant. A USA TODAY/Suffolk University Poll in late August found that 52% of Americans support the $3.5 trillion budget plan and 63% back the infrastructure bill. Biden is banking that he’ll be able to wrangle the votes to pass the massive investments he campaigned on, and that will turn around his fortunes. 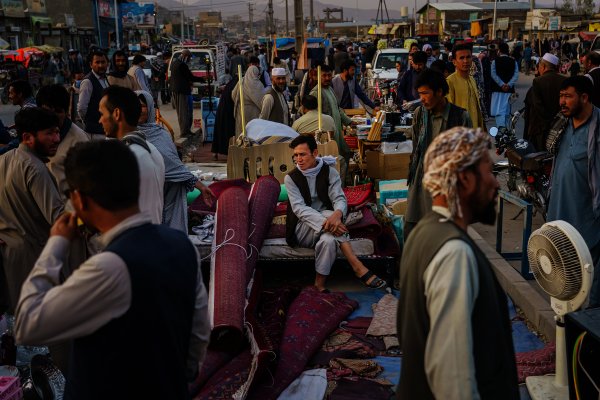 Biden Wants to Send Aid to Afghanistan Without Supporting Taliban
Next Up: Editor's Pick