The Problem With Jon Stewart Could Be Great, If It Ever Catches Up to the Present

There’s a telling moment in an early episode of The Problem With Jon Stewart. During a lively discussion on contemporary authoritarianism, Francisco Marquez, a Venezuelan activist and former political prisoner, mentions an event from the host’s Daily Show days. “I remember your march,” he says, referring to Stewart and Stephen Colbert’s jokey Rally to Restore Sanity and/or Fear, held on the National Mall in 2010. “I think it was against insanity or something along those lines.” In the perfect sarcastic deadpan that is his trademark, Stewart cracks: “Yeah, we won.”

It’s a throwaway exchange, but one that captures Jon Stewart’s uncertain place in the culture, six years after leaving a role in which he helped launch so many still-thriving comedy careers and reshape late-night talk shows and political satire for the 21st century. At this point, the pleas for common sense and critical thinking—from politicians, the media and the public at large—that he issued nightly from his Comedy Central desk would sound hopelessly naive. Also: who is the audience for his funny, scathing rants these days? Conservatives who didn’t exactly welcome his tough love in the George W. Bush era have now shifted even further to the right. And today’s version of the young, liberal audience Stewart teased for being stoners might not be quite so enthusiastic at the prospect of a straight, white guy in his 50s yelling at them about injustice.

So it’s something of a relief that the initially uneven but potential-packed The Problem, which premiered Sept. 30 on Apple TV+ and will release new episodes every other Thursday, is not trying to be another Daily Show (which has established a considerably less shouty, more bemused tone under Trevor Noah). Episodes are twice as long, looser in structure and, though there are plenty of jokes, more earnest in their efforts to provide information and analysis.

Like Daily Show alum John Oliver’s acclaimed HBO series Last Week Tonight, The Problem addresses a single issue in each installment. While the premiere focuses on veterans who suffered grave illnesses following exposure to burn pits in the Middle East, an additional episode sent for review takes on the slippery concept of freedom. And like Bill Maher without the smug, trollish tone, Stewart opens with a monologue before moderating a panel discussion. What’s refreshing is that, instead of celebrities, pundits or authors with books to promote, the show enlists relevant experts and people who have firsthand experience to contribute. In the burn-pit episode, that means conversations with ailing veterans who’ve unsuccessfully sought help from a VA that claims it’s still investigating why so many vets who slept next to mounds of burning, toxic trash went on to receive life-threatening diagnoses. Along with Marquez, the discussion of authoritarianism and freedom includes the dissident Egyptian comedian (and Stewart pal) Bassem Youssef and the heroic Filipino-American journalist Maria Ressa, who joined virtually because her ongoing “cyber libel” case prohibits her from leaving the Philippines.

These panels might sound dutiful on paper. In fact, the participants are so knowledgeable and articulate, and Stewart so determined not to dumb down their messages, that these might turn out to be the most consistently engaging segments of the show. “The new propaganda is a behavior modification system,” says Ressa, in explaining how oppressive regimes can manipulate social media. “A lie told a million times becomes a fact.” Stewart could be a pretty indifferent interviewer when forced to make small talk with celebs on The Daily Show (a fact he actually alludes to in The Problem), but he brings the full force of his curiosity and frustration to these conversations, and it’s clear that he’s in his element.

After just two episodes, it’s hard to get a sense of how mutable The Problem’s format will be. As is, the places where commercials would be in a linear TV show are filled with quick, forgettable sketches of and mostly dull behind-the-scenes segments that show Stewart talking through each episode with his staff. (Considering that The Daily Show faced high-profile criticism for its “woman problem” as far back as 2010, the latter clips might also serve as subtle ways of highlighting how many women and other non-white-guys Stewart has hired this time around, and how well he gets along with those staffers.) While the panel consumes the back two-thirds of “Freedom,” the burn pit episode ends with a satisfyingly, if also somewhat performatively, confrontational one-on-one interview in which Stewart pushes VA secretary Denis McDonough to simply state what kind of proof the government will need in order to start paying vets’ claims.

The show’s success will ultimately depend on its specificity and timeliness. Despite its broad title, “War,” the burn-pit episode works because it tackles a particular, relatively manageable issue that will be new to many viewers. And instead of just screeching to the choir, so to speak, as he did on The Daily Show, Stewart channels his outrage into an interview with the person who has more power than anyone else to solve the problem in question.

“Freedom” is kind of a mess, though, at least until it gets to the panel portion. In his monologue, Stewart uses the partisan split over masks and vaccines to frame his hand-wringing about how competing ideas of what it means to be free are tearing apart the U.S. It’s an apt metaphor, but also one that’s been reiterated to a pulp over the course of this 18-month pandemic. This time last year, it might’ve felt cathartic to watch Stewart respond to a montage of people declaring that they won’t get the vaccine with the exclamation “What the f-ck?!” Now? It makes you want to ask where he’s been all this time. A mock game called “What’s More Hitler?” that spoofs anti-vaxxers’ propensity to compare public health rules to totalitarianism falls completely flat.

Stewart is a polarizing figure, and one whose cranky, sarcastic grandstanding worked much better with his original, Gen X audience than it does today. But, at its best, The Problem isn’t just about self-righteous yelling; like many of Stewart’s post-Daily Show projects, it’s about using his fame to effect change, or at least raise the level of mainstream political discourse. It has a long way to go to achieve that objective. More episodes like “War” and fewer like “Freedom” would be a good start. 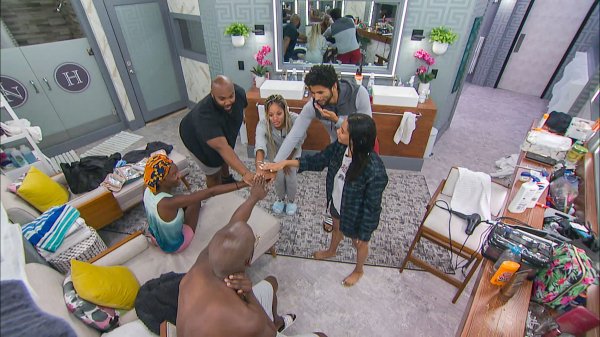 How Big Brother Finally Got Its First Black Winner After More Than 20 Years on the Air
Next Up: Editor's Pick