The cancellation of Youssef’s wildly popular show El Bernameg (“The Program”) underscored Egypt’s constriction of freedom of expression since the military removed elected President Mohamed Morsi last year. Since Morsi’s ouster, authorities put an end to the freewheeling media atmosphere that arose in the wake of the 2011 uprising. The interim government shuttered Islamist media, jailed Egyptian and foreign journalists and banned unauthorized protests. The crackdown on political opponents initially targeted thousands of Morsi’s primarily Islamist supporters, but it’s now affected many who, like Youssef, were staunch critics of Morsi.

In a news conference Monday at the downtown Cairo theater where his show used to be recorded, Youssef did not explain exactly why the show would not return to the airwaves, but suggested government pressure was to blame. “The Program doesn’t have a space,” he said. “It’s not allowed.”

He also insinuated that he refused to continue to air the show while watering down its caustic style of political satire. Youssef modeled his show on Jon Stewart’s The Daily Show, savaging politicians and media figures of all stripes. He said the network, Saudi-owned MBC Masr, had tried to keep the show on air. “I thank MBC Masr for hosting us and I can’t blame it for the pressures it had been put under. It was more than it could handle.”

The backstory to The Program’s cancellation remains murky, but experts say a system of de facto media constraints has remerged in Egypt since 2013, in which self-censorship and back-room pressure on media outlets are the norm. Mainstream writers, editors, anchors and network executives are believed to constantly self-police a set of constantly-shifting “red lines” that delineate what can and cannot be said.

“The pressure is never official,” said Rasha Abdulla, a professor of journalism and mass communication at The American University in Cairo. “All you need is a phone call or a word in passing.”

“We don’t know the exact mechanism, but it’s happening, and the results are very clear,” Abdulla said. “You have a very monotone media, a single-voiced media, with absolutely no opposition voices in the media. If they are, they are extremely mild.”

Since The Program first aired in 2011, Youssef has sparred with a series of governments and mocked a range of opponents. Youssef finally crossed one too many lines in April 2013, when prosecutors under the government of Muslim Brotherhood leader Morsi issued an arrest warrant for him. A satirist to the core, Youssef appeared at Egypt’s High Court wearing an enormous version of a cylindrical black graduation hat Morsi had worn in Pakistan. He was released the same day on bail.

Youssef cheered the protests that prompted the military to remove Morsi, but when he returned to the airwaves months later, he appeared chastened by the shrunken space for government criticism. He did not directly mock Abdul Fattah al-Sisi, the military leader who pushed the Muslim Brotherhood from power and who last week was elected Egypt’s president in a pro forma election. Instead, in one episode, Youssef took aim at the cult of personality around Sisi, joking, for example, about the phenomenon of cakes and sweets stamped with Sisi’s face.

However, according to a former member of Youssef’s staff, the show’s approach to Sisi was set to change as Sisi assumed the presidency. Staffers were informed of the cancellation last Monay, just as the staff were preparing an episode, never recorded, that confronted Sisi explicitly. The episode was never recorded.

“The red lines conversely inspire creativity,” said Jonathan Guyer, a senior editor of the Cairo Review of Global Affairs and a writer who studies Egyptian political satire. “This happened under Mubarak. Because nobody was publishing drawings of Mubarak, everyone found a workaround to draw Mubarak. I wouldn’t be surprised if the people on his team find a way to work around or make their own series.” 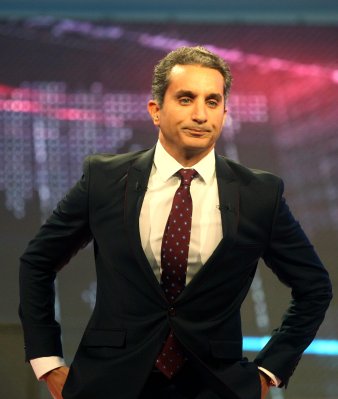 Egyptian Satirical News Show Won't Be Coming Back
Next Up: Editor's Pick