Speaker of the House Nancy Pelosi holds her weekly news conference in the Capitol on Sept. 23, 2021.
Bill Clark—CQ-Roll Call/Getty Images
By Philip Elliott

House Speaker Nancy Pelosi had never wavered. She said simply would not bring any bill to the floor of the House for a vote if it didn’t have enough votes to pass. But in the last 24 hours, she seems to have softened that position—if not dared her progresive friends to prove her a liar.

Last night, Pelosi told her colleagues that she was going to move forward with a bipartisan packet of $550 billion in new spending on roads and bridges while she and her fellow Democrats keep honing a much bigger package of spending on so-called “soft infrastructure,” things like universal pre-K and free community college that are expected to carry a very large, but as yet unknown, price tag.

It was a win for moderates, who wanted to vote on the smaller, bipartisan package first. But progressives have warned they’d reject it unless they also got a vote on the big-ticket wish list at the same time. That moment of mutually-assured destruction seemed to roar into reality last night, as Pelosi finally decoupled the two bills, saying Democrats would vote on the Senate-passed bipartisan plan while still working on the soft infrastructure agenda.

Now the route ahead is anything but clear.

“I thought we were on a path,” Pelosi told reporters. They were not.

Congress is moving forward with four interweaving projects at the moment, as TIME’s Alana Abramsom describes in terrific detail here. But here are the top lines.

First, the budget year ends when the clock ticks past midnight late Thursday and into Friday. Lawmakers are literally racing the clock to find a way to give themselves extra innings to get the budget done, maybe a few weeks or even until December.

Secondly, the Treasury Department is about to run out of ways to delay IOUs from coming due and will max out the nation’s credit card. Congress is facing an October-ish deadline to update a law that came into existence as cover to drag reluctant lawmakers into World War I. (MSNBC’s Rachel Maddow led an episode of her show last week with the absurdity of this vestige of the Wilson era and she makes the whole process seem as ridiculous as it is.)

Third comes the bipartisan infrastructure bill that would spend $550 billion on new projects and leave a $256 billion pool of red ink over the next decade.

And finally, there’s the massive social-infrastructure bill that has only support among Democrats—and not necessarily all of them, at that—that will transform America’s social safety net at a cost to taxpayers of TBD.

Everyone in Washington has been using the sum of $3.5 trillion to describe the plan, but there’s no way of really knowing its cost. The Congressional Budget Office hasn’t calculated the real cost of the whole thing, and there was, until last night, a very good chance that the House would pass it and send it to the Senate without hearing a tally from the nonpartisan CBO. All the while, some lawmakers are vociferously demanding it get smaller—without yet knowing its actual size. Pelosi’s scheduling shift might give CBO a chance to tally the costs yet.

By law, every piece of legislation that moves out of committee and to the full House or Senate gets a CBO look. While CBO wonks are famously brilliant or daft—depending on how you want to use their assessments—they are not political and resist any invitation to be so. So when they say a piece of legislation will create (or cost) a number of jobs, wealth or opportunity, members of Congress generally listen. Not every member can—or should—have a Grade A economic team, so the CBO nerds fill in the technical gaps from their perch up on the fourth floor of the Ford House Office Building. The political and policy advisers then can pick on the messy parts once they have hard numbers to work with.

CBO so far hasn’t passed along their view on the mega-infrastructure bill in large part because it hasn’t yet taken final shape. Because of Democrats’ narrow margin of majority, almost everyone has a veto on the whole agenda, which means anyone who wants a tweak has to at least be heard. If you show up with a bloc of just four, your case has urgent credibility. Democrats can afford just three defections in the House and none in the Senate. As The D.C. Brief outlined last week, there are many, many ways this whole castle collapses in a spectacular fashion. This is, to be blunt, going to be a tricky plane to land.

“They frankly made far more promises—both policy and legislative promises—than they can possibly meet,” says Marc Goodwin, a top policy hand at the watchdog Committee for a Responsible Federal Budget. “They’re going to have to figure out how to kind of square a lot of circles.”

Against that backdrop, and with centrist Senators heading to the White House for a sit-down with President Joe Biden today, Pelosi decided to push pause. Signs had been pointing this way for at least a week, when a top Pelosi lieutenant de-linked the popular bipartisan bill from the Democrats-alone bill. But to have Pelosi publicly switch course was a jarring move that left some Democrats fleetingly doubting their faith in their pilot.

Things are already dodgy. Democrats are availing themselves of a legislative loophole that helps them skirt a filibuster on the annual budget. The trickery relies on the belief that you don’t really need 60 votes to make technical fixes that crop up between a House-passed budget and the one that clears the Senate. Well, Democrats—and a willing Parliamentarian—had hoped to reopen the current year’s budget in its final hours to insert a spending bill to cover universal pre-K, efforts to combat climate change and free community college. The bill is about as close as Biden will get to an inclusive passage of his agenda, at least until after the 2022 midterms that could well give Republicans the majority in either chamber of Congress.

Democrats even today continue to insist that everything is fine—that they can figure out how to get their members’ support for the two bills, increase the debt ceiling and avoid a government shutdown by the end of the week. But White House has started instructing departments to prepare shutdown plans. And while Senate Majority Leader Chuck Schumer is projecting confidence that the party will rally behind Biden’s agenda, other Democrats are starting to agitate to end the filibuster, pointing to the four-track collision course underway as Exhibit A. And while some lawmakers are telling reporters that the soft infrastructure bill is too big (Sen. Joe Manchin) or should not raise corporate or income tax (Sen. Kyrsten Sinema), what no one really knows is the true cost of this drawn-out effort in dollars—or, perhaps more importantly, political capital.

If only Congress had its own in-house team of wonks who could quantify that number. 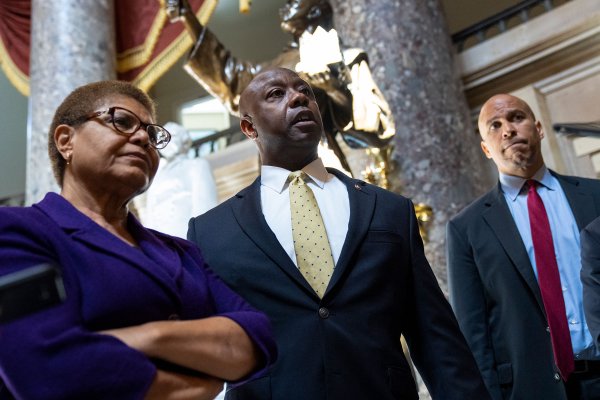 ‘Defund the Police’ Was a Catchy Slogan. It’s Also Why a Policing Bill Fell Apart
Next Up: Editor's Pick