Why an Immigration Overhaul Won't Be Part of the $3.5 Trillion Infrastructure Plan

Activists demand that Congress and the Biden Administration create a path for citizenship for millions of immigrants while rallying in Lafayette Park across from the White House on Aug. 17, 2021.
Chip Somodevilla—Getty Images
By Philip Elliott

The Senate’s wonk-in-chief has once again shown who’s really in charge as lawmakers try to push $3.5 trillion in spending through an arcane budget rule.

On Sunday, Senate Parliamentarian Elizabeth MacDonough foiled Democrats’ efforts to include long-sought changes to immigration laws in the enormous spending package winding its way through Congress. Democrats have been moving forward with plans to tuck a sweeping immigration overhaul into the package and pass it along partisan lines with only Democratic votes. But MacDonough stepped in with a polite but pointed piece of advice to lawmakers: This is too big of a change to take advantage of the budget trick known as reconciliation; the bill being considered, she wrote, carries “tremendous and enduring policy change that dwarfs its budgetary impact.”

In other words, she said, lawmakers cannot squeeze giving eight million immigrants a pathway to legal citizenship into a legislative loophole that allows lawmakers to conduct budget revisions without a super-majority 60 votes. In the most routine of times, the rule is a way for staff to reconcile Senate and House edits of the budget without re-running the entire legislative tape from the beginning.

This year, it’s already been used to shepherd a $1.9 trillion pandemic relief package. Now, Democrats were looking to use the same loophole to insert into a $3.5 trillion follow-on provisions that would have opened the door for legal status to immigrants who came to the country illegally as children, those who were granted entry for humanitarian reasons, farmworkers and other essential workers like those in hospitals, nursing homes and grocery stores.

The setback was not unexpected. “I always knew this would be a long process,” said Sen. Robert Menendez, the Senate’s highest-ranking Latino who has been advocating for the package of immigration changes. “I and my Democratic colleagues intend to continue working until we get to yes with the Parliamentarian.”

The budget trickery Democrats are planning to use has very specific rules, including a requirement that the tool be employed only to deal with federal spending and revenue. Those limits have thwarted earlier efforts to slip things into budget bills: earlier this year, Democrats were not allowed to tack an increase to the federal minimum wage to $15 an hour onto the $1.9 trillion pandemic relief bill, and in 2017 Republicans’ were unable to use a tax-cuts package to end a ban on churches playing politics while keeping their tax-exempt status. Democrats had considered trying to use the process to advance a voting-rights bill, but ultimately saw that as unlikely to win MacDonough’s approval.

MacDonough has been persuaded to change her mind before. Last year, Sens. Chuck Grassley and Ron Wyden—the top Republican and Democrat on the Senate Finance Committee—argued that part of Sen. Josh Hawley’s proposal to leave the World Trade Organization was inappropriate for a vote because it had not gone through their panel. MacDonough initially sided with Hawley but two weeks later changed her ruling. But that’s very much the exception and far from the norm.

MacDonough has already handed Senate Democrats a big win, issuing an advisory earlier this year that they could reopen a budget bill to fold in a package to spend $1.9 trillion along party lines to ease pandemic woes. In the past, lawmakers were given one chance per budget year to send things into law with just 51 votes, but MacDonough said they could treat themselves to multiple bites of the legislative apple if they treated the add-ons as amendments to the budget. Absent that, they’d have to wait until the new budget year opens on Oct. 1.

As the presiding officer of the Senate, Vice President Kamala Harris can, of course, overrule the Parliamentarian. The last time it was done was in 1975, when Vice President Nelson Rockefeller presided over a change in the number of votes to end a filibuster from 66 to 60 in a fully-staffed Senate. Democrats could also fire MacDonough, and there’s more-recent precedent for this. Senate Majority Leader Trent Lott did so in 2001 to pass the Bush-era tax cuts through the loophole now in question.

White House Chief of Staff Ron Klain says the Biden team isn’t looking at those options, though it’s worth noting that President Gerald Ford didn’t know Rockefeller was going to go rogue on the rostrum. There is nothing that gives Biden or his deputies any power over what Harris does in her twin role as the Senate’s chief. But it’s tough to imagine Harris unilaterally going against the norms of a body where she served as a Senator for four years and where Biden served for 36.

Absent any drastic action, Democrats’ immigration reforms face an uncertain future. In 2013, the Senate passed a massive and comprehensive immigration bill with 14 Republicans supporting it. But of those original 14, just five remain in the Senate: Sen. Susan Collins of Maine, Sen. Lisa Murkowski of Alaska, Sen. John Hoeven of North Dakota, Sen. Lindsey Graham of South Carolina and Sen. Marco Rubio of Florida. In fact, those last two helped write the bill and—in a sign of how the Republican Party has changed in recent years—Rubio had to distance himself from it during his 2016 race for the White House, calling it a mistake.

That bill never had a chance at a vote in the then-Republican controlled House, and that was before President Donald Trump made immigrant-bashing a central plank to both of his White House runs. Any hope of passing changes to the nation’s immigration laws with Republican votes now is almost zero. Trump may be gone, and this weekend’s rally in support of the insurrection he inspired may have been a failure, but the mark he leaves on this country is not fading any time soon. 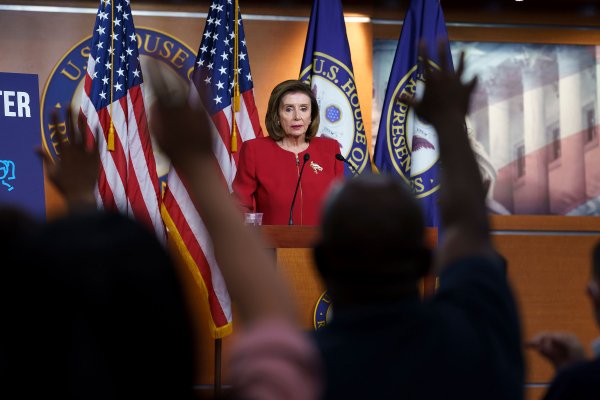 Democrats Face a Grueling Two Weeks as Infighting Erupts Over Infrastructure
Next Up: Editor's Pick