Rev. William Barber, Co-Chair of the Poor People’s Campaign, speaks alongside Texas State Representatives and fellow religious leaders, as they prepare to deliver a petition to Senate Majority Leader Charles Schumer calling for an end to the filibuster, the passage of the For The People Act and restoring the Voting Rights Act, at the U.S. Supreme Court in Washington, on Aug. 12, 2021.
Kevin Dietsch—Getty Images
By Philip Elliott

In many ways, politics is a theater for policy discussions, told through varied layers of symbolism and stage management. Politicians signal meaning in the colors they choose to wear, the towns they visit and the venues they appear in. On the outside, activists stage elaborate performance art, like handing out flip-flops to shame candidates who switched positions, or flying prop-planes with slogans dragging behind on banners.

The moves don’t have to be terribly subtle to have a desired effect. There certainly won’t be any level of subtlety at political events in Charleston, W.Va., tomorrow. Organizers say it’s too late to chase any degree of nuance as they build a case against West Virginia’s notoriously apolitical politician, moderate Democratic Sen. Joe Manchin.

“We really have a crisis in the character of the nation right now. On the one hand, you’ve got Republicans who seem to never see anything that will lift the masses of the people that they like. They are committed to a retrogressive public policy. They believe in treating corporations like people,” says the Rev. William J. Barber II, a co-chair of the Poor People’s Campaign: A National Call for a Moral Revival, which positions itself as an heir to the civil rights movement’s activism and has been merciless to Manchin. “On the other hand, you’ve got so-called moderate and centrist Democrats, who did not swear to uphold the moderate or the centrist Constitution. They swore to uphold the Constitution. Somehow or another, when they get in… they follow the lead of the Chamber of Commerce rather than the Constitution.”

Manchin represents one of the poorest—and whitest—states in the country. West Virginia was second only to Wyoming in its support for Donald Trump last year. Manchin initially refused to back Democrats’ aggressive voting-rights bills and later appeared at a Texas fundraiser with Republicans trying to roll them back in that state. He is no fan of Democrats’ big-ticket infrastructure plans and won’t scrap the filibuster to do other legacy-defining ideas. And he was one of eight Democrats to vote against upping the minimum wage to $15-an-hour as part of a Democratic-only COVID-19 relief bill. In a 50-50 Senate that tilts to Democrats only when Vice President Kamala Harris breaks a tie, Manchin effectively has veto power.

Which is why Barber, after meeting today with House Speaker Nancy Pelosi, is heading to West Virginia to pressure Manchin. When Barber last showed up with activists in the state in June, Manchin changed his tune on voting rights. Now, Barber tells TIME, he wants Manchin to keep evolving on voting rights, the filibuster, a minimum-wage hike and workers’ rights. It’s an ambitious agenda, for sure, but one that can trace its roots back to the Civil Rights Movement of the 1960s.

The plan is for 151 cars—or more—to motorcade to Manchin’s office in Charleston to celebrate the 151st anniversary of the 15th Amendment, which effectively gave Black men the right to vote. And, once there, they’ll demand a $15-an-hour minimum wage. The launching point for this parade? The site of the Battle of Blair Mountain—the 1921 labor fight that was the largest armed uprising since the Civil War, during which the feds turned their guns on workers to keep them from demanding rights. The lead-off car for this week’s march will be a hearse, carrying what organizers say will be a symbolic representation of Manchin’s backbone.

Chekhov, this isn’t. But for organizers, the time for polite petitions and subtle symbolism is over.

“We know in West Virginia, we are bright red. And for years we have kind of overlooked some of the things that Manchin’s done because we know he’s trying to appease both sides of the party,” says Pamela Garrison, a 61-year-old self-described “professional cashier” who has worked her whole life for minimum wage and plans to participate tomorrow. “Sen. Manchin, how can one man have that much power and not use it for good? We’ve overlooked it for years, but it’s down to where these [issues] are too important… to be on the fence. So we want to know: Which side are you on? On the side of the people? Or are you on the side of the corporations?”

(These same organizers have a beef with the other most moderate Democrat in the Senate, Kyrsten Sinema of Arizona, and have heckled her, too.)

If all of this feels like a lot, well, it is. But it’s not without precedent.

When the Rev. Dr. Martin Luther King Jr. led the famous March on Washington in 1963, it wasn’t solely about civil rights. In fact, one of the march’s platform planks was a $2-an-hour minimum wage. You guessed it: that would be about $18 these days, adjusted for inflation.

The 15th Amendment in 1870 was the last of the Reconstruction-era changes to the Constitution designed to make it illegal for state and federal officials to deny Americans the right to vote based on race, color or previous state of slavery. More than a century later, Americans are still fighting for these rights as voting rights come under fire and Congress just this week started work on yet another outline to countermand state-level efforts to restrict voting in places like Georgia and Texas.

Finally, the staging ground at Blair Mountain sets the stage for a worker-rights debate that, especially in the poorest corners of this country, speaks to the rampant unfair conditions facing Americans. The same streak of populism that helped Trump win the White House is alive and well on the left in West Virginia, where folks like Garrison have had enough. It’s why she was with the protest in June and she’ll be at the front tomorrow.

“He heard us because we were in his face,” she says. “We’re not here being courteous. We’re here demanding, before it’s too late. I’m here for my kids, my grandkids, because I don’t want a democracy only in name. I don’t want to be Russia.”

A spokeswoman for Manchin said the Senator is always listening to his constituents. “Sen. Manchin appreciates The Poor People’s Campaign advocacy efforts, which is why he met with the group several months ago,” the spokeswoman said. “He continues to listen to the concerns West Virginians share and seek solutions to the issues facing our state.”

Still, the pressure is mounting on Manchin, a smart politician who, as this newsletter has noted many times before, may be the last Democrat capable of winning statewide in West Virginia for some time. But he also knows how to win. Which is why activists are keenly aware of this fact: in 2020, just 3% of voters in West Virginia identified as Black—the exact margin of Manchin’s victory in 2018. In other words, the few Black voters in the state could decide whether Manchin keeps his job after he is expected to next face voters in 2024. Symbols don’t cast ballots, but they carry tremendous power in determining who might choose to do so. 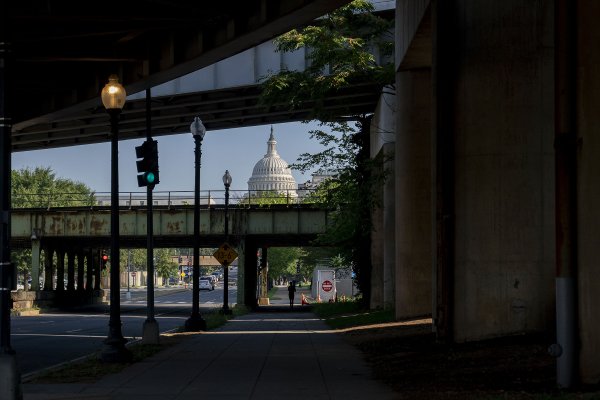 House Democrats Fight Over Infrastructure Bill
Next Up: Editor's Pick