Speaker of the House Nancy Pelosi holds her weekly press conference at the Capitol on Aug. 25, 2021.
Kevin Dietsch—Getty Images
By Philip Elliott

Remember the good ol’ days of 2019, before COVID-19 changed almost everything? Back when Joe Biden was the affable former Vice President who promised to bring people together? When his advisers insisted time and again that his 36 years in the Senate and eight years as Barack Obama’s Congress Whisperer would get big deals across the finish line? Well, Washington is waiting to see if he can actually deliver on that sale, and it’s looking dicey.

Biden today is in marathon meetings with his nominal allies on Capitol Hill. His mission is to suss out if he is doomed to preside over a collapsing agenda and shuttered government, or if he will prevail in his chase of two huge infrastructure bills, a check for the nation’s credit card bill and permission to keep the lights on. Biden’s huddles with Democratic Speaker Nancy Pelosi and Majority Leader Chuck Schumer are paired with sessions to hear from progressive leaders and their new foes, centrist Democrats.

Ostensibly, they all want to back Biden’s agenda. But they all have parts of the current $3.5 trillion plan they can’t stomach. If the bill fails, Democrats will all go down together in a moment of legislative mutually-assured destruction. And as Biden’s poll numbers slump, there were more than a few copies of a well-respected poll from Iowa showing up in consultants’ inboxes; in a state where Biden won 45% of the vote last year, his job approval number has sunk to 31%.

Yes, it’s another Democrats in Disarray day here in D.C. Here are five reasons why Biden’s agenda could blow apart spectacularly in the next eight days—and one why we should all just take a moment and not get too carried away.

The latest chaos started with a pen-and-pad, one of Washington’s most useful traditions where lawmakers invite a group of reporters to their office’s conference room and they talk without the need to perform for the television cameras. House Majority Leader Steny Hoyer delivered a bombshell in his roundtable on Tuesday: Congress would pass what it could before the end of the fiscal year on Sept. 30 and get to the tougher tasks when they were doable.

It was a blatant reversal of Democrats’ stated strategy. For weeks, Democratic Leadership had insisted they were pursuing a two-track system, linking the passage of a bipartisan plan that spends $550 billion in new money on infrastructure with a big-ticket, $3.5 trillion social spending package that has support only from Democrats. Most Democrats had agreed that it was an all-or-nothing proposition, tying the fortunes of both to the end of the fiscal year and clearing the decks for the start of the new one on Oct. 1. And Democratic Leadership promised moderates a vote on the smaller piece by Sept. 27, although Hoyer hinted it may slip a day.

Well, yesterday, House Democratic leaders quietly announced they’d take it as a two-step process, preserving their pledge to moderates but imperiling both packages as many progressives have said they won’t vote for the first without the second. The latter group has already been very vocal with their frustration that the big-ticket piece isn’t bigger. Folks like Rep. Alexandria Ocasio-Cortez have made plain that this is not the time for half-measures.

That was the response when a reporter on the Hill yesterday asked Rep. Pramila Jayapal if the progressive caucus that she leads would really tank the bipartisan infrastructure bill if the bigger package doesn’t get passed, too. Of the 220 Democrats in the House, 95 are members of the Congressional Progressive Caucus. And Jayapal isn’t being shy about the power they wield; Pelosi can afford just three defections to get the $3.5 trillion bill through the House, and Jayapal told her that “half” of her caucus will sink the bill unless they get the Democrats-only companion.

Progressives are keenly aware that this may be their last chance to make a real policy difference for a decade or more. Much of Biden’s campaign agenda is wrapped up neatly in the big infrastructure bill, things like universal pre-K, tuition-free community college and efforts to combat climate change. The chances of any of those items clearing a 60-vote bar in the Senate are exactly zero, meaning they need to become law through a procedural curiosity that lets legislation walk through a loophole with 51 votes if it’s linked to a budget.

Progressives are keen to acknowledge the context they’re operating in. With the exception of the 2002 midterms, the party in the White House always faces a shellacking in their first midterm elections in the modern era, and redistricting is not expected to help House Democrats’ chances of holding their current eight-seat majority. Republicans will be able to weaponize this massive spending proposal—passed or not—to paint Democrats as big-government lovers, as they did with Obamacare. The Senate map is equally tough for Democrats, who currently stand at a 50-50 vote in the Senate. Standing with Biden might not be much of a help if what Iowa’s polling plays out elsewhere and stays on its current glidepath.

For the moderate wing of the Democratic Party, the politics look even less sunny. There are seven Democratic House members who hail from districts Trump won in 2020. They know the Democratic brand isn’t great, and throwing open the gates for $4 trillion in Biden-backed spending won’t help. The lone Democrat to vote against Biden’s pandemic relief bill is one of them, and Rep. Jared Golden is now pushing Pelosi to get moving on the bipartisan infrastructure package. He is one of nine Democrats who said he would vote against the big-ticket plan if the bipartisan plan didn’t get a vote next week.

Meanwhile, across the Hill, two Senators have been practicing their own line-in-the-sand skills. In a meeting last week with Biden, Kyrsten Sinema privately warned that she was a no vote on big-work infrastructure if the bipartisan bill isn’t voted on, or—worse for Democrats—fails.

Add to that the reluctance of Sen. Joe Manchin of West Virginia, who voted to open debate on the $3.5 trillion plan and almost immediately told fellow Democrats to take a “strategic pause” on trying to pass it into law. Both Schumer and Sen. Bernie Sanders, the two-time presidential candidate, have been working behind the scenes to get Manchin to vote yes when that time comes. Even so, Manchin has insisted the current price tag is too high, and he doesn’t love anything that could let Mountain State Republicans tie him to anything resembling a coal-killing Green New Deal.

Ultimately, these centrists are expected to fall in line, provided they get what they were promised: a vote on bipartisan infrastructure by Sept. 27 (or close enough to that date). Tanking a fellow Democrat’s presidency isn’t something that makes for long careers and the pragmatism of these objectors may lead them to see the wisdom of being owed by the White House on what may be Biden’s legacy project.

As The D.C. Brief noted last week, Democratic Leadership in the House had to committee-shop a venue to advance a provision that would pay for a $550 billion chunk of the $3.5 trillion by letting Medicare negotiate prices directly with drug companies. The savings, then, would be reprogrammed to daycare and college tuition.

To most, that sounds perfectly reasonable. No one really loses sleep worrying about PhRMA CEOs’ 401(k)s. But we are in the middle of a pandemic and the only reason we aren’t still locked in our bunkers is drug companies’ ambition and deep cash reserves. Drug companies’ standing with the public has seen a massive positive shift since before the pandemic. Even Congress’ own budget wonks acknowledge the change being considered would cost the jobs of 1 million Americans, the non-creation of 60 new treatments between now and 2051. Literally, the policy change under consideration would kill people in the hands of crafty consultants’ ad machines.

This is why a handful of Democrats—cutting across geographic and ideological planes—have gone on-the-record opposing including it in the bill. In fact, three voted against it in one committee, forcing it to find passage in another. For lawmakers with districts with heavy drug-company presences, this is one that’s sufficiently deadly to be called a poison pill. You can’t turn on cable news in the D.C. market in the evenings without seeing both camps trade political ads on the subject. And that’s what we see in public; the drug lobby does not mess around behind the scenes, either.

Republicans, meanwhile, are quite content to sit back and watch this play out. The bipartisan infrastructure bill cleared the Senate with the backing of 19 Republicans. But it’s expected to be far less popular in the House, where many GOP members still take their marching orders from Mar a Lago. Just last night, not a single Republican in the House voted for yet another debt ceiling increase, flying in the face of history. As the Department of the Treasury notes, Congress has taken the step 78 times since 1960, 49 of them under Republican Presidents.

The big question now is how many Republican Senators might sign onto the temporary spending plan and debt-ceiling boost the House passed last night. Should that fail, it would throw into peril the global economy and show the U.S. to be an unreliable and irresponsible borrower. Senate Minority Leader Mitch McConnell has been resolute to his members that those will have to be done with just Democratic votes, just like the big-ticket piece outlined and pending.

Which means today’s meetings at the White House may involve moving the debt ceiling and government funding provision into a mega-infrastructure bill that requires just 50 votes plus the Vice President. Lumping them all together in a super-bill may be the only way to deliver them together through a loophole that now seems the size of the Grand Canyon.

But—and it’s a big one—this is not yet over. Pelosi is peerless when it comes to finding ways out of seemingly impossible moments like this. She understands what an unwieldy coalition her Democratic Party has become, a party of centrists and progressives, Wall Street-hating populists and deep-pocketed coastal donors. If this were Europe, the Democratic Party would be at least five parties.

Democrats on the Hill are watching Pelosi closely and with true confidence. Even in the face of overwhelming chaos, senior Democrats are confident that if anyone can sort this out, it’s her—even if it means finding ways to cow Republicans into voting for it.

Where Schumer’s talents fall firmly in how Democrats should communicate, Pelosi’s are best when navigating tough political situations. She summoned staggering skill to get Obamacare across the finish line, often despite the Obama White House itself misreading the situation and chasing Republican support where none was to be found. She knows where favors are to be found and where warnings might work. She is second to none on the Hill when it comes to counting votes, and she’s been quietly in touch with Republicans to start whipping votes across the aisle.

But she’s also not a risk-taker. She will not bring a package to the floor if its fate is uncertain. In her personal life, she puts her faith in her Catholicism. But in her political life, she gets behind the machine politics she grew up watching. Which is why counting her out in the face of tough conditions is seldom a smart choice. As many Democrats on the Hill will tell you, they don’t know how, but Pelosi can still salvage this. 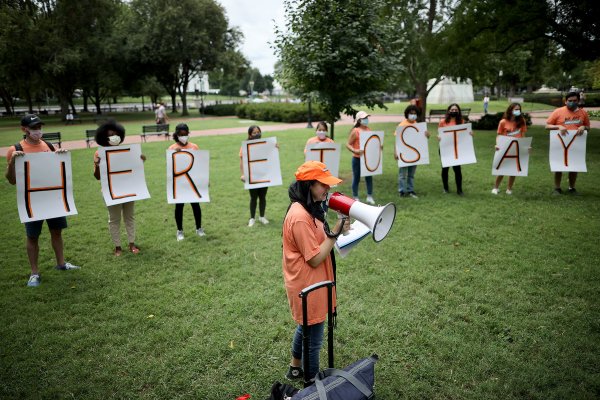 Why an Immigration Overhaul Won't Be Part of the $3.5 Trillion Infrastructure Plan
Next Up: Editor's Pick