Joe Biden Is Keeping Mark Milley. But His Actions Show the Country Is Still Grappling with the Trump Era

Chairman of the Joint Chiefs of Staff Mark Milley took extraordinary steps to try to prevent Donald Trump from using military action to remain in office, according to revelations from a forthcoming book by Washington Post reporters Bob Woodward and Robert Costa. Those actions from months ago are now causing a headache for President Joe Biden: Milley currently sits in the same top position in Biden’s chain of command, and Biden is facing calls to fire him.

Biden and his staff have so far showed no signs of being concerned about Milley’s actions under Trump or the possibility he’d stretched too far the trust between any sitting President and military leaders. “I have great confidence in General Milley,” Biden said Wednesday.

But Milley’s reported activities to curb Trump—demanding he have visibility in the nuclear strike chain and trying to use a backchannel to cool tensions with an adversary— are raising questions about whether Milley had overstepped his role in a way that undermined the President, and if he might do it again. And they are a reminder that the hot embers of Trump’s slash-and-burn tenure at the top of American democracy are still smoldering under the surface of Biden’s presidency.

According to Woodward and Costa’s reporting, Milley was so alarmed by Trump’s erratic impulses and the possibility Trump may use military action to remain in office after he lost the election that he told fellow generals to include him on any nuclear strike orders from Trump, and assured China’s top military leader the U.S. was not planning an imminent military attack and that he would give China a warning if it was. Those steps are highly unusual. And they speak to the remarkable pressure Trump was putting on the nation’s national security apparatus at the end of his presidency, as he used the levers of power to bolster his failed reelection campaign, and later, his bully pulpit to incite a mob to overturn the legitimate election results.

Aides around Biden believe Milley took those steps at a time when Trump had already shown a pattern of violating democratic norms, such as pressuring his Justice Department to intervene in investigations, criticizing federal judges and using the military to clear civilian protests. The context of Milley’s actions, Biden aides said, is important to note. ”This current President, who follows the Constitution, who’s not fomenting an insurrection, who follows the rule of law, has complete confidence in Chairman Milley and him continuing to serve in his role,” White House Press Secretary Jen Psaki said Wednesday.

But some with influence in Washington expressed concerns that Milley went too far. Former Lt. Col. Alexander Vindman, who worked on the National Security Council under President Trump and became a star witness in Trump’s first impeachment hearing, wrote on Twitter that if the anecdotes in the book were true, “Milley must resign.” Florida Senator Marco Rubio told Biden he should fire Milley. In a letter to Biden on Tuesday, Rubio, the top-ranking Republican on the Senate Intelligence Committee, wrote that Milley “worked to actively undermine the sitting Commander in Chief” and that “threatens to tear apart our nation’s longstanding principle of civilian control of the military.” In a statement Wednesday evening, Trump called Milley “a complete nutjob,” said Milley never informed him of calls to China, and claimed Milley “put our Country in a very dangerous position.”

Col. Dave Butler, a spokesman for Milley, said in a statement Wednesday that Milley’s calls to China were not done in secret. “His calls with the Chinese and others in October and January were in keeping with these duties and responsibilities conveying reassurance in order to maintain strategic stability,” Butler said. Milley did hold a meeting with senior leaders about the nuclear strike protocols, Butler said. “The meeting regarding nuclear weapons protocols was to remind uniformed leaders in the Pentagon of the long-established and robust procedures in light of media reporting on the subject.”

The scrutiny on Milley is only going to amplify. Milley took over his role under Trump in October 2019 and has now been working under Biden in the same position for nearly eight months. He was already scheduled to testify before the Senate Armed Services Committee on September 28; while that testimony was supposed to center on the decisions leading to the shambolic Afghanistan withdrawal, he’s now likely to face questions under oath from senators about these revelations.

Some experts say Milley’s extraordinary conduct has to be viewed within the frame of an extraordinarily precarious time. Milley’s reported actions show “how much Trump’s behavior set off really strong alarms in the senior levels of the military as well as in foreign governments,” says Jordan Tama, an associate professor at American University’s School of International Service. “He was trying to prevent something disastrous from happening in an unprecedented context. We can quibble with some of the specific details of how he handled this, but in general, it’s good if our senior military leaders are trying to figure out, when presented with a President like Trump, how to prevent the President from taking steps that could be truly catastrophic.”

But Milley’s actions don’t come without a potential cost to the carefully calibrated machinery governing the relationship between career generals and elected Presidents. “The Joint Chiefs of Staff are designed to provide advice to the President, but that body is not an independent policy actor or implementer on its own,” Tama says. “To the extent that this suggests that the military may act more as a freelancer than it’s supposed to, that is problematic for civil military relations because Presidents really need to see the military as an institution that does not act independently.”

Milley’s behavior may have been unusual, but it wasn’t unprecedented. The steps Milley took are reminiscent of how President Richard Nixon’s military leaders handled their fears that he might give the military politically-motivated orders as his Presidency was unraveling during the Watergate investigation. (The Watergate scandal was a story famously broken by Woodward in his early years as a reporter at the Washington Post.) In the summer of 1974, Nixon’s Secretary of Defense James Schlesinger told the service chiefs that he needed to be informed if they got any orders from the White House, according to a 2007 interview with Schlesinger by Timothy Naftali, former director of the Richard Nixon Presidential Library and Museum. Milley may have been trying to put himself in a similar role, as a check against a politically motivated strike that could spin out of control, Naftali says. “It’s a reminder of just how dangerous the Trump Administration was, not just for our domestic politics, but for our world,” Naftali argues.

It’s also a reminder that some of the fires Trump started during his time in the Oval Office are still burning and won’t easily snuff out. 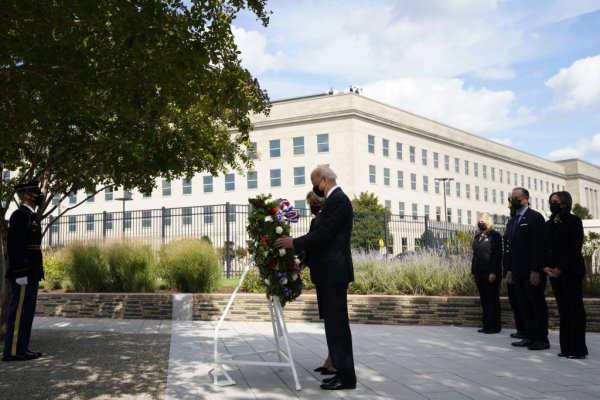 2 Presidents Search for Unity
Next Up: Editor's Pick