After President Trump Incited a Riotous Mob, Will He Face Any Consequences?

It’s over. Donald Trump officially and irreversibly lost the election.

Congress’s certification of the election result just before 4 a.m. on Thursday, brought to a close one of the ugliest days in modern American politics. It started with Trump standing on a stage in front of the White House telling thousands of supporters he will “never concede,” and urging them to walk down the National Mall to the Capitol to give Congressional Republicans “the kind of pride and boldness that they need to take back our country.”

A rioter climbs the walls of the U.S. Capitol after President Trump encouraged a rally audience to pressure Republican lawmakers on Jan. 6.
Peter van Agtmael—Magnum Photos for TIME

The day was also deadly. One woman was killed by police in the Capitol. Three other people died of medical emergencies.

Those 24 hours provided what will be the defining images of Trump’s disruptive presidency: mobs assaulting police and breaking windows to storm the halls of Congress, protestors taking selfies on the Senate floor, blood smeared on marble statues, police barricading the door to the House chamber with guns drawn. All of his hostility toward Washington, his disregard and contempt for the country’s democratic traditions, culminated in a violent display of Trump supporters laying siege to the Capitol.

‘He is lonely tonight’

The question now is, what will be the consequences for Trump?

In the short term, the President lost the faith of several aides inside the White House and prompted a new raft of resignations. Republican allies on Capitol Hill—including Senators who had previously been willing to back a doomed effort to challenge the election result—pushed him away. Twitter and Facebook took unprecedented action to temporarily freeze his accounts after he used them to incite violence.

“He is lonely tonight,” said a longtime informal advisor to Trump on Wednesday evening. “He knows his staff is looking at him in disdain.”

For four years, many Republicans had accepted an uneasy bargain by having Trump as their standard bearer, and put up with the lies, the erratic decisions and self-centered rule in exchange for placing conservative judges in federal courts, rolling back regulations and driving home tax cuts for corporations and the wealthy. But even long-time supporters who worked closely with Trump believe he has irreparably damaged his legacy by breathlessly spreading disinformation about non-existent election fraud and encouraging thousands of his supporters to march on Congress.

Read more: Photographs From Inside the Chaos at the Capitol

“President Trump’s legacy is tarnished forever. Full stop. The question is, how badly is this going to set back the conservative movement?” said a former White House staff member.

Trump’s obsession with personal loyalty proved to be incompatible with running a democracy, which requires a fidelity to the Constitution and respect for the verdict of voters at the ballot box.

An injured pro-Trump supporter outside the Capitol building after clashes with police and security forces in Washington D.C., on Jan. 6.
Peter van Agtmael—Magnum Photos for TIME

Trump’s deputy National Security Advisor Matt Pottinger submitted his resignation on Wednesday. Deputy White House press secretary Sarah Matthews also resigned, saying she had been “deeply disturbed” by the breach of the Capitol. Stephanie Grisham, a longtime Trump family loyalist who served as White House press secretary and most recently as the First Lady’s chief of staff, submitted her resignation, as did Anna Cristina Niceta, the White House social secretary. National Security Advisor Robert O’Brien publicly expressed his support for Pence, drawing speculation he was considering resigning. (A senior Administration official said O’Brien will stay at the White House to ensure an orderly handling of national security affairs over the final two weeks of the term.)

“We didn’t sign up for this. … We always knew it was going to be a dance with the devil. But I don’t think anybody expected that to be like this,” added the former official.

The official said more resignations are likely coming. The thinning staff could mean functions of the White House, already hobbled by the pandemic and a high rate of turnover in the West Wing, will suffer as Trump closes up his final days. “I think we’re going to get to a point where it’s going to become an issue that there’s frankly not going to be enough people around to run things,” says the former White House official.

This despite the nation sorely needing leadership. COVID-19 deaths exceeded 3,800 in one day on Wednesday, a new record; hospital across the nation are reaching capacity; and the vaccine rollout is faltering, falling well behind the goals the Trump Administration set.

The longer term effects were still materializing in Washington, as some Democratic lawmakers floated the idea of censure or launching a quick impeachment proceeding. White House aides read up on how many Cabinet members needed to consider Trump unable to serve in order to invoke his removal from power under the 25th Amendment—which provides a complex path to stripping away the powers of the a President and giving them to the Vice President. Vermont’s Republican Gov. Phil Scott called for Trump to resign or be removed from office by his Cabinet or Congress.

But there isn’t much time left in his term. After Congress certified Biden’s victory, Trump released a statement saying he would finally recognize the result of the election—but still said he disagreed with the outcome and falsely insisted “the facts bear me out.”

Rioters objecting to the certification of President-elect Joe Biden by Congress were briefly blocked by police outside the Capitol before gaining entry on Jan. 6. They wreaked havoc before being expelled.
Peter van Agtmael—Magnum Photos for TIME

The damage is done

As the pro-Trump rally in front of the White House got started early Wednesday, the President’s personal lawyer Rudy Giuliani called for “trial by combat” to overturn the election result. Trump’s oldest son, Don Jr., said that the large cheering crowd on the Mall should send a message to the GOP: “This isn’t their Republican Party anymore. This is Donald Trump’s Republican Party.”

After the President’s speech to supporters in the middle of the day, Trump did not march to the Capitol himself. Instead, he returned to the West Wing, and spent the afternoon between meetings in the Oval Office and ducking down a narrow corridor to watch news footage of his supporters rioting at the Capitol on the television in his private dining room.

Initially Trump seemed to relish the show of force. As rioters holding Trump flags smashed into the Capitol building and U.S. Capitol Police were telling lawmakers to grab gas masks and “go bags” and evacuate, Trump defended the mob’s actions, writing in a Tweet that was later taken down: “These are the things and events that happen when a sacred landslide election victory is so unceremoniously & viciously stripped away from great patriots who have been badly & unfairly treated for so long. Go home with love & in peace. Remember this day forever!”

That half-measure didn’t quell the violence. House Minority Leader Kevin McCarthy told ABC News that he called Trump and “begged” him to broadcast a forceful statement. Shortly after 4 p.m., Trump released a polished video message recorded in the Rose Garden that still did little dissuade the rioters. “We had an election that was stolen from us,” Trump said, “but you have to go home now.” He ended the clip telling the mob, “We love you. You’re very special.”

As night fell, police in riot gear cleared the Capitol grounds and the House and Senate were able to resume the formal certification of the election result. But the damage to American democracy had been done.

“The mob that occupied the U.S. Capitol tried to interfere with the peaceful transfer of power,” said Nicole Austin-Hillery, the head of the U.S. program at Human Rights Watch. “This is the culmination of a reckless campaign by the president and his enablers to undermine democratic processes and the rule of law since his electoral defeat. The government needs to hold them to account.”

Just what that accountability will look like remains to be seen. Trump hopes to wield political influence after he leaves office by doling out campaign contributions from his $200 million fundraising war chest, the Save America political action committee. For now, Trump said he’ll leave office in an “orderly” way on Jan. 20.

It will be up to Congress and the public to hold him to it.

—With reporting by Tessa Berenson and Kim Dozier / Washington 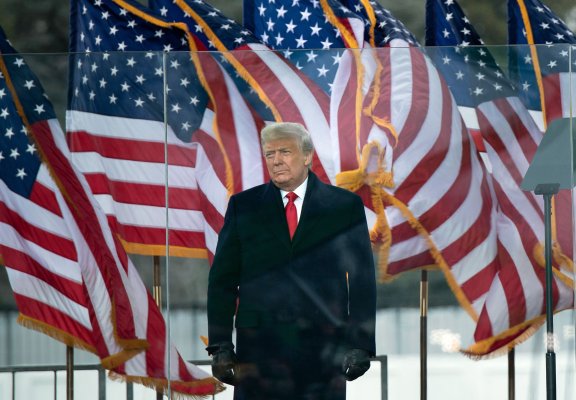 'People Are Just Trying to Land the Airplane.' White House Staff Packs Up as Trump Rages On
Next Up: Editor's Pick