'A Decision Was Made.' Biden Faces the Fallout for His Chaotic Retreat in Afghanistan

It was the first time Joe Biden had witnessed dead Americans returning home from a foreign battlefield as President and Commander in Chief. The bodies of 11 Marines, a Navy medic and an Army staff sergeant arrived on U.S. soil on Sunday, Aug. 29, all killed in a suicide bombing at the Kabul airport on Aug. 26 amid America’s chaotic exit from Afghanistan after 20 years of war. For 35 minutes, as the flag-draped cases were carried down the ramp of an Air Force C-17 cargo plane at Dover Air Force Base, in silence except for the hum of aircraft engines and muted troop commands, Biden stood in front of the cold reality of his decisions.

A series of fateful choices over the past six months drew a tragic line to that moment. It was Biden who, in April, settled on an Aug. 31 date for withdrawing U.S. forces from Afghanistan. It was Biden who chose a minimum number of U.S. troops to secure the exit. And it was Biden, updated in intelligence briefings and meetings over the summer, who oversaw his Administration’s abandonment of a key air base, the delay in evacuating U.S. citizens and allies, and a belated scramble to provide more troops to get everyone out safely.

Hard decisions are history’s acid test for Presidents. It’s easy to forget amid the posturing and politics, but the architecture of American power means there are some calls that only the President can make. And when it came to Afghanistan, Biden was determined to make them. He had watched the war’s launch as the Senate’s top foreign policy overseer nearly 20 years ago, then fought and lost an effort to end it as Vice President. Since announcing the exit, he has never publicly wavered on that call. For his political allies and his opponents alike, it was his experience and certainty that made the Taliban’s lightning takeover of Afghanistan and the ensuing, brutal scenes of panicked flight by American and Afghan civilians so shocking. How could Biden fail to forestall the humanitarian disaster headed his way?

More tough decisions are on the way now that the last U.S. plane has lifted off from the Kabul airstrip. The Aug. 26 bombing at Kabul airport’s Abbey Gate raises the specter of a continuing terrorist threat in Afghanistan. Biden now presides over the manhunt for the Islamic State Khorasan (ISIS-K) operatives behind the attack, and on Aug. 29, a U.S. drone strike targeting ISIS-K operatives reportedly killed 10 members of an Afghan family, including seven children. Between 100 and 200 Americans and thousands of U.S. allies in Afghanistan are now reliant on the Taliban for a way out, while economic collapse threatens a worsening humanitarian crisis. Many of those who have escaped face a global purgatory at temporary sites as Biden’s Administration struggles to vet and resettle tens of thousands of refugees.

On Aug. 31, a day after the last U.S. soldier left Kabul, Biden said at the White House that he took “responsibility for the decision” to end the war. As Congress prepares to investigate the withdrawal, he will be held accountable for the calamitous way it unfolded as well.

In the weeks after he took office, Biden faced a deadline to deliver on his campaign promise to bring the majority of U.S. troops home from Afghanistan. Donald Trump had struck a deal with the Taliban in February 2020 that promised a May 1, 2021, departure for U.S. combat troops and the release of thousands of Taliban prisoners in exchange for an end to attacks on U.S. forces. Taliban negotiators were holding firm to the terms of Trump’s deal, and during four National Security Council meetings early this year, Biden sat at the end of the long wood table in the Situation Room in the basement of the West Wing and asked for his options.

There was dissent among his top advisers. At one Principals Committee meeting that included Defense Secretary Lloyd Austin and Chairman of the Joint Chiefs of Staff Mark Milley, Biden’s top national-­security officials debated whether to rip up Trump’s deal, to ask the Taliban to extend the May 1 deadline or to keep troops on the ground indefinitely. Milley, who served three tours in Afghanistan, said he thought it was important to keep the existing presence there to prevent the country from falling apart, according to two senior Administration officials.

In the end, Biden winnowed the choices before him to either leaving on a fixed timeline or having a permanent troop presence in Afghanistan, which would mean returning to an active shooting war with the Taliban. After a final NSC meeting in mid-April, he officially made the decision to get the troops out. “It’s time to end the forever war,” Biden told the country on April 14, standing in the same room in the White House where George W. Bush had announced the first attacks on the Taliban in October 2001.

Biden’s decision to leave quickly, with a minimal number of troops to preside over the exit, meant abandoning Bagram Air Base, a massive, well-­defended facility 40 miles outside Kabul. With orders from the President to take Trump’s troop level of 2,500 down to zero by Aug. 31 and defend the U.S. embassy in the process, the Pentagon decided not to ask for the 2,000 additional troops it would have needed to keep Bagram running. “We had to collapse one or the other,” Milley told reporters Aug. 18, “and a decision was made.”

A dark meme shared among U.S. intelligence officers as chaos spread in late August attributed a fake, snarky quote to Sun Tzu’s Art of War: “Always abandon your most strategic air base right before an evacuation.” But it was how the Pentagon left Bagram that may have had the most damaging knock-on effect. Afghan troops woke up at the base on July 2 to find the Americans gone, having left in the middle of the night without notifying anyone. Later that day, Biden tried to make things appear under control, telling reporters the U.S. departure was “on track, exactly where we expected to be.” But the military’s abrupt and secretive departure from Bagram emboldened the Taliban and demoralized the Afghan troops fighting them, Administration officials now admit. Within weeks, Afghan forces collapsed in major provincial capitals as the Taliban took back the country with little resistance.

As the situation worsened, Biden belatedly changed course. On Wednesday, Aug. 11, a previously scheduled evening National Security Council meeting in the Situation Room on a different topic was derailed by what to do next in Afghanistan. Biden tasked the Pentagon to deploy more troops to the region and shore up the Kabul airport, from which he ordered the military to begin evacuating civilians. Biden’s team warned the Taliban not to enter Kabul, but when Afghan President Ashraf Ghani fled on Aug. 15, one day after assuring Secretary of State Antony Blinken that he would hold the line, the Afghan security forces melted away and the Taliban took the city. By Aug. 26, when a suicide bomber affiliated with ISIS-K donned a vest packed with explosives and made his way to the Kabul airport, it was U.S. Marines and other U.S. service members who were manning the airport’s frontline checkpoints, checking papers and conducting pat-downs for thousands trying to flee the Taliban takeover.

In the wake of the attack and U.S. departure, Biden is still scrambling to evacuate the remaining Americans and Afghans who helped the U.S. during the past two decades. American military and intelligence officials outside Afghanistan are ramping up the effort to track terror groups inside the country, relying more on unmanned drone flights and information sharing with local allies to head off deadly plots that might target the U.S. Tens of thousands of refugees are stuck in camps from Doha, Qatar, to Fort Lee, Va., awaiting screening and resettlement.

Even as the consequences of his decisions continue to unfold, history is already preparing to pass judgment. Republicans and Democrats on Capitol Hill are readying investigations into Biden’s chaotic evacuation and gauging what political impact the deadly withdrawal will have on passing his transformative economic legislation. In capitals around the world, allies and adversaries are weighing what the shambolic U.S. departure from Afghanistan means for its power and influence. And Biden’s own allies inside the White House and the Democratic Party are trying to assess the effects of the bloody August unraveling on his, and their, political future. —With reporting by W.J. Hennigan 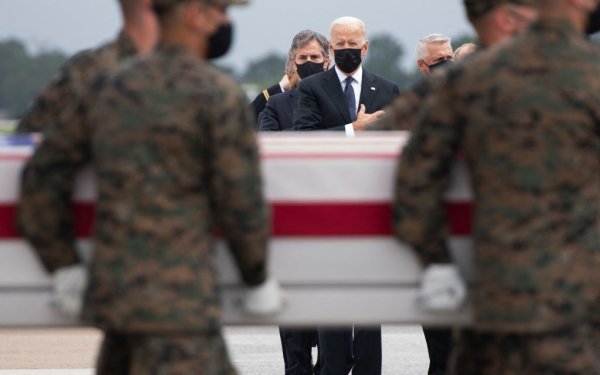 Congressional Oversight on Afghanistan Is Just Beginning
Next Up: Editor's Pick