Before police launched tear gas and rubber bullets within a block of the White House. Before officers on horseback charged a line of protestors. Before President Donald Trump held up a Bible in front of a church with the sting of chemicals still in the air. There were the trucks.

Shortly after 5 p.m. on Monday in Washington, a line of nine military trucks carrying National Guard troops in helmets and tan camouflage uniforms slowly rolled onto the White House grounds and down a narrow alley past the entrance to the West Wing, the canvas tops passing just below the windows of the offices of the President’s chief of staff, the vice president and the national security advisor.

Protestors, calling for an end to police violence and systematic racial discrimination, could be heard chanting louder across Lafayette Square Park as the District of Columbia National Guard vehicles drove out of the White House’s north gate, and turned right along a fence line that, on another June evening, would have been dotted with tourists snapping selfies in front of the north portico’s iconic columns.

The rare showing of military might at the White House was just the beginning of the orchestrated drama Trump had set in motion. Inside the White House, a podium was being set up in the Rose Garden for Trump to address the nation roiled by wide-spread protests and vandalism following the death of George Floyd in Minneapolis police custody. In the surrounding blocks, police and federal officers were positioning themselves as more protestors gathered and the 7 p.m. curfew neared.

Tear gas floats in the air as a line of police move demonstrators away from St. John's Church across Lafayette Park from the White House, as they gather to protest the death of George Floyd, Monday, June 1, 2020, in Washington.
Alex Brandon–AP

A few hours before, Trump held a conference call with state governors, telling them some had been “weak” in responding to the protests. Trump had his own ideas on how to handle unrest, and he had been stung by reports the Secret Service had taken him into the White House bunker on Friday night as protests outside escalated. While the President has little control over how states use their police or national guard troops, in Washington, D.C. he does command a large array of federal forces including the Secret Service, the United States Park Police, the FBI, the Bureau of Alcohol, Tobacco, Firearms and Explosives (ATF), the Drug Enforcement Administration (DEA), the U.S. Marshals and the Federal Bureau of Prisons.

By 6:30 p.m., more than a thousand people lined the north edge of the park chanting “Black lives matter,” “No justice, no peace,” and “Stop killing black people,” and facing down a line of Secret Service and D.C. Metropolitan Police officers with helmets and riot shields.

Then the bangs started.

As Trump began to speak in the Rose Garden, tear gas canisters could be heard being launched into the crowd across the park, and the sounds of bangs and screams carried over the treetops and punctuated his remarks. Trump began with three sentences about Floyd, the 46-year-old black man who died in Minneapolis on May 25 after a white police officer kept his knee on his neck for eight minutes and 46 seconds. “All Americans were rightly sickened and revolted by the brutal death of George Floyd,” Trump said, adding that his Administration “is fully committed that for George and his family justice will be served. He will not have died in vain.”

For the rest of Trump’s six minute and forty-two second speech, the President did not mention or commit to solve the main grievance of the protestors being noisily gassed outside: the frequency of killings of unarmed black men and women by police officers across the country. Instead, he pivoted to his central point of the night projecting himself as the defender of order. “We cannot allow the righteous cries of peaceful protestors to be drowned out by an angry mob,” he said. “I will fight to protect you. I am your president of law and order and an ally of all peaceful protestors.”

He said he was taking action to “restore security and safety in America.” He will mobilize “civilian and military” resources to “stop the rioting and looting,” he said, and “protect the rights of law abiding Americans including your Second Amendment rights,” a line some feared was an invitation for gun owners to take the law into their own hands. He said he wants every governor to deploy the National Guard and “dominate the streets.” If a city or state doesn’t do enough, Trump said, he “will deploy the United States military and quickly solve the problem for them,” a threat that would require the use of the Insurrection Act of 1807 and test the Constitutional limits of the President’s power to use the military on home soil.

Trump ended his speech by saying he was going to pay his respects “to a very very special place.” The President then left the Rose Garden and walked out of the front gates of the White House, escorted by the Secret Service and several aides. He stopped in front of the parish house of St. John’s Church, which had been vandalized the night before when protestors ignited a fire in the basement nursery. An hour earlier, the sidewalk in front of the church had been a station where priests and other volunteers were helping hand out water to protestors, before the crowd was violently cleared by police and federal officers.

There, in front of the historic pale yellow sanctuary, known as “The Church of Presidents,” Trump stood for pictures, awkwardly balancing a Bible in his right hand. When a reporter asked if it was his Bible, Trump said it was “a Bible.” Asked if he had any thoughts, Trump said, “We have a great country. That’s my thoughts. Greatest country in the world. We will make it greater. We will make it even greater. It won’t take long. It’s not going to take long. You see what’s going on. You see it coming back. ”

Trump’s moment—for him to look in control of the two-block radius around his home and to stand with a Bible in front of a church—came at a huge cost, using the full force of the federal government to quash a peaceful protest and raising echoes of martial law.

The Rev. Mariann Budde, the Episcopal Bishop of the Diocese of Washington, D.C., which includes St. John’s Parish, objected to Trump’s photo-op. “The Bible teaches us to love God and our neighbor; that all people are beloved children of God; that we are to do justice and love kindness,” Budde wrote on Twitter. The President “used a Bible and a church of my diocese as a backdrop for a message antithetical to the teachings of Jesus,” Budde wrote, and “to do so he sanctioned the use of tear gas by police officers in riot gear to clear the church yard.”

Two hours before Trump stood at the church, Anya Colon was holding a poster that read “Black Lives Matter,” at a spot nearby facing the columns of the White House. Colon, 38, had driven seven hours from Rome, N.Y., to bring her message to the President. “I feel like Trump catalyzed a lot of racism going on in this country — that’s always been going on, of course, it’s not his fault, but I had to bring it to him,” Colon says.

Colon’s grandmother marched in Selma, Alabama in 1965 to push local authorities to allow black people to vote. “We have to do some things that make change. This marching has been going on for decades. I had to be here, something from inside my gut drove me and pulled me here,” says Colon, who is African-American. She brought her cousin with her, Iliana Arthur, 41. Arthur also held a sign. It read: “We matter.” 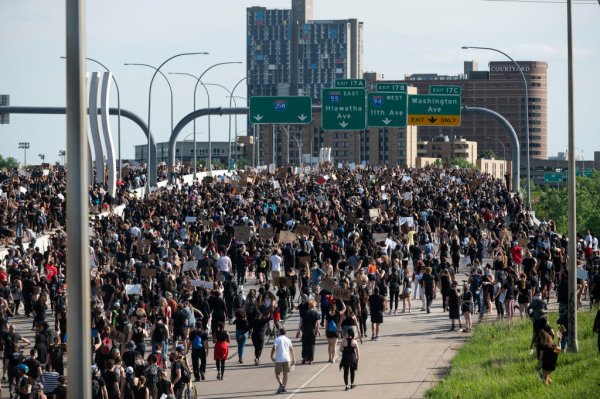 Minneapolis Protests Were Years in the Making
Next Up: Editor's Pick