Who's Afraid of Peter Thiel? A New Biography Suggests We All Should Be

Paypal cofounder Peter Thiel is famous for destroying media outlets, not paying taxes, and being a conservative tech billionaire. A new biography, The Contrarian, suggests that he is after more than riches. TIME chatted with its author, journalist Max Chafkin.

Why should we care about Peter Thiel, apart from the fact that he is another rich tech billionaire and they’re all weirdly fascinating?
I think that Peter Thiel is secretly the most important person in Silicon Valley. He’s this behind the scenes player, who is behind so many of the really important things that have happened over the last two decades. Obviously Facebook is one of the world’s largest companies; a lot of people think it’s uniquely bad for the world. And a lot of people are super skeptical of Mark Zuckerberg, Facebook’s CEO. And of course, Thiel is behind Facebook. He was the first outside money in the company. He is also the person who basically set up Mark Zuckerberg to be Mark Zuckerberg and turned him into this imperial CEO, who is now, arguably more powerful than a lot of world leaders.
A lot of people are really excited about cryptocurrency and you can connect it back to to PayPal, which is the company that Thiel co-founded in the late 1990s with an explicitly libertarian ethos. There’s this aspect of crypto-world now, where people are really excited about the idea of taking power away from institutions and governments and that’s something that Thiel and his libertarian brethren that were starting that company were really interested in. It’s not something that happens accidentally.

Read More: The U.S. Is Losing the Global Race to Decide the Future of Money—and It Could Doom the Almighty Dollar

Do you see Thiel as dangerous?
It’s really important that we understand the ideology of Silicon Valley. Five of the top 10 companies in the world are tech companies. They exert an enormous cultural and economic influence over our lives. Those companies have been really successful at telling a story about the world and their place in the world: we’re just trying to make the world a better place. Thiel comes with a very different perspective. He comes out of activist conservative media. I think it’s really important that we explore the ideology of what somebody like Peter Thiel believes. When you start peeling back the layers, what you find is this very out-there political and economic philosophy that I think is a little bit scary.

What do you find scary about his economic and political philosophy?
It’s bordering on fascism. Thiel taught this class at Stanford and then turned it into a book called Zero to One. He talks about how companies are better run than governments because they have a single decision maker—a dictator, basically. He is hostile to the idea of democracy. That’s pretty scary when you consider the role the companies that he’s been involved in play. Facebook, I’d say is the most influential media entity in the history of humanity, but he also has a major stake in several defense contractors, including SpaceX.

He would explain it as belief in efficiency and results, right? He would not say, ‘I don’t think everybody has the right to vote.’
There would be some rationale and in fact, at various times he’s walked back things he said. His whole thing is being slippery, but I think when you look at the body of what he’s done and the things he’s been involved with, that’s the picture that emerges.

A lot of people were very surprised that this nerdy, gay, Californian son of immigrants techpreneur decided to support Donald Trump’s presidency. Was it just the pure I’m going to shut down government aspect of Trump’s policies that he liked?
If you look at his convention speech—which I think was a really good speech—he talks about Trump as this guy who’s gonna shake things up, who’s going to remake government, so I think that’s one part of it. The other part of it is, Thiel is very committed to the idea of being able to say the unpopular thing. That’s a core part of what Trump was. I also think that Thiel is a really savvy investor and he correctly diagnosed that Trump had a pretty good chance of winning and that there wasn’t a lot of downside to betting on him.
He didn’t formally endorse Trump during the 2020 election, but if you look at the candidates he’s [now] supporting, they’re Trumpers: J.D. Vance, who’s running for Senate in Ohio was an employee of Peter Thiel’s and an investor in his fund. Before announcing that he was gonna run for Senate, Vance said that he was wrong in 2016 to oppose Trump, and around the same time, he got this $10 million dollar donation from Thiel to his super PAC. Another candidate that Thiel is supporting in the coming cycle is Blake Masters, who is literally an employee. He runs Thiel’s foundation.

Did Thiel get blowback about the January 6th attack on Congress?
I think certainly his reputation in certain corners of the establishment has suffered. But I don’t think he really cares about the blowback; he seems to really take pleasure in that.

Do you have a guess at his net worth?
There’s an estimate of $6 billion, but I have talked to people who think actually quite a bit higher than that. One reason is that he has been incredibly adept at finding clever ways to limit his tax exposure; those investments in Facebook, in Palantir, and some others were made through this investing vehicle known as a Roth IRA that was originally intended for middle class taxpayers. Through some very clever tax planning, Thiel has managed to stash up billions of dollars in this tax-free account.

When that story [that he used Roth IRAs to massively lower his taxes] broke, there was an outrage that somebody who had made so much money in America was not contributing to the national purse. Do you think he cared?
Some of the ideology that motivated PayPal, and that motivates a lot of this crypto stuff that has happened since, is all about going beyond nations. It’s about this idea that individuals should have more power than nations and should be able to basically do whatever they want. It’s about undermining the national interest and making sure they don’t contribute to it.

Do you see Thiel as an outlier among his tech brethren, or as an exemplar?
The conventional wisdom is Thiel is an outlier; he’s like the one conservative guy in this relatively liberal industry. I think that is basically wrong. Many of the things that he believes are reflected in the actions and behavior of many of his peers. Yes, they may have some disagreements. Many of his peers may vote for Democrats. But the idea that companies should basically be able to do whatever they want, that democracy isn’t the most important value, these things are reflected in the decisions and actions that many Silicon Valley companies are making, even Silicon Valley companies that are run by ostensibly liberal progressives.

In the beginning of the book, you paint a portrait of Thiel as a bullied child. Other kids put For Sale signs in his yard and then asked when he was leaving and so on. Was that the cradle of his reactionariness?
I think he was bullied as a child. And I think that it’s not surprising that somebody who maybe had a tough time navigating a place like Stanford would develop a strong revulsion to the idea of universities like Stanford and would undertake a project to replace or critique these universities. Thiel famously funds a fellowship where he encourages promising young people to start companies instead of going to college and he’s been a prominent critic of colleges. But he’s only a halfway critic. He says in a thousand different ways that Stanford is worthless, but he keeps teaching classes at Stanford. He keeps hiring Ivy League graduates.

Most of your sources are anonymous. Why do you think people who spoke to you spoke to you?
Thiel’s pretty unique in that he was involved in this elaborate and secretive litigation campaign that resulted in the destruction of a pretty substantial media outlet when he secretly funded Hulk Hogan’s lawsuit against Gawker Media, which resulted in this roughly $100 million dollar judgment. So I would talk to people and they would be like, ‘I’m a little afraid of him.’ I wouldn’t really know what to say because I think there’s actual reason for people to be afraid of Peter Thiel.

Read More: Peter Thiel Made an Offer to Buy Gawker, the Website He Helped Close

Are you personally worried?
I’d be lying if I said that Thiel’s litigation against Gawker didn’t weigh on me and I think you’d be foolish to not think about that. That said, it’s not productive to be afraid.

Thiel has been right a lot. I wonder if there’s a bit of you thinking, ‘If he’s been right about these things, what should I be looking for now?’
Recently, he gave a speech where he dissed bitcoin, which was a weird thing. If somebody who played a big role in the beginning of digital money is suddenly saying that maybe crypto is bad for the interests of the United States, we should pay attention. There’s an extent to which he’s a great prognosticator, a great futurist. But he’s also a marketer of himself and he’s been very good at accentuating the calls that have been right and and playing down the calls that have been wrong.

You note that he has funded two senators—Ted Cruz and Josh Hawley—and is now funding two more candidates. Do you worry he’ll wield outsized power over government?
I have to say I worry less about the grandstanding of a handful of senators connected to Thiel than I do about the effect of Thiel-ism on the culture. When you combine the hostility to democracy and institutional norms with the bankroll of a billionaire you can potentially do some damage.

This conversation has been lightly condensed and edited for clarity. 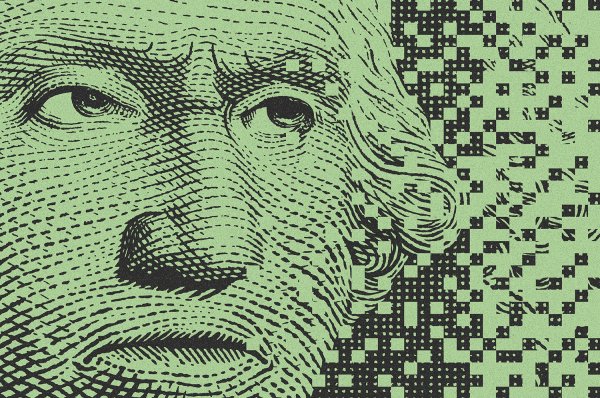 The U.S. Is Losing the Global Race on Digital Currency
Next Up: Editor's Pick