How Donald Trump Courted Gay Voters at the Convention

Billionaire tech investor Peter Thiel knew he just had to get to the end of the line. Don’t slow down, don’t give the audience a chance to react until he had delivered the whole point.

The words made history — the first time a Republican convention speaker noted his sexual orientation — but also left the party stuck in something of a contradiction. Donald Trump’s acceptance speech mentioned gay rights and it drew cheers too. “I have to say, as a Republican, it is so nice to hear you cheering for what I just said. Thank you,” Trump said, straying slightly from an otherwise closely scripted speech. It was an uneasy moment inside the hall, with those who disagreed choosing to stay silent.

After all, days earlier, the party adopted as part of its platform ideas that gays and lesbians can be made into heterosexuals through “conversion therapies” and that marriage should be limited to straight couples — setting aside the Supreme Court ruling that rendered opposition moot with a ruling that all couples can marry. If the GOP platform were enacted, some of Thiel’s rights would be rolled back.

To say there has been a tension over LGBT rights in Cleveland would be an understatement. Thursday night’s end of Republicans’ nominating convention brought to an end one of the most disjointed, least consistent weeks in American politics. Thiel didn’t even make it through the first paragraph of his speech when a heckler shouted an antigay epithet from the balcony. By the time Thiel uttered his six, history-making words — “I am proud to be gay” — the audience inside the arena had come to see Thiel as a person, not someone who deserved jeered.

Thiel’s inclusion on the schedule was always high-risk. Yes, he founded PayPal and was an early Facebook investor. But he’s also an openly gay man in a party that has seldom embraced such members. Like the broader culture, there is a generational divide on LGBT rights inside the GOP, and this was not an audience that tilted toward youth. Thiel and his team knew the appearance was fraught with potential problems, but decided it was worth the risk. He just had to keep the speech moving.

“When I was a kid, the great debate was about how to defeat the Soviet Union, and we won. Now, we are told that the great debate is about who gets to use which bathroom. This is a distraction from our real problems. Who cares?” Thiel said, nodding to his libertarian instincts and showing his disgust with those who have kept their eyes on public bathrooms. Fights about such private spaces should not have been in the platform, to Thiel’s frustration.

“I don’t pretend to agree with every plank in our party’s platform, but fake culture wars only distract us from our economic decline,” Thiel said. “And nobody in this race is being honest about it except Donald Trump.” It was a rejection of the GOP orthodoxy with Trump’s tacit endorsement.

There are signs that party is shifting. At a packed, off-site event this week, reality-TV personality and Olympian Caitlyn Jenner said it was easier to come out as transgender than to come out as a Republican. “I get it. The Democratic Party does a better job when it comes to the LGBT and trans community,” Jenner said. “The Republican Party needs to understand. They need to know people who are trans.”

The culture wars, however, had a fertile battleground in Cleveland. Retired Lieut.-Gen. Michael Flynn mocked the Obama Administration for being too inclusive with the military: “War is not about bathrooms.” It won hearty support from delegates on the floor, who see LGBT rights as yet another example of political correctness gone wild. Trump brought the crowd to a roar, saying: “We cannot afford to be so politically correct anymore.”

So delegates are to be forgiven for not fully understanding what, exactly, the GOP is trying to do at other points. From the podium, a Trump executive said her boss “knows LGBTQ lives matter” — using one of the more inclusive versions of an acronym that is not on the tips of these conservatives’ tongues. “We are the party of the open door,” Republican National Committee chairman Reince Priebus said. Former House Speaker Newt Gingrich framed LGBT rights through national security. “If our enemies had their way, gays, lesbians and transgender citizens would be put to death as they are today in the Islamic State and Iran,” he said. And Senator Ted Cruz of Texas said the Constitution does not see sexual identity. “Whether you are gay or straight, the Bill of Rights protects the rights of all of us to live according to our conscience,” he said.

Thiel was the first openly gay individual to address a GOP convention since 2000, when former Representative Jim Kolbe spoke — and some delegates lowered their head in silent, prayerful protest back then, even though Kolbe said nothing about his sexuality. But that’s not to say gays and lesbians have not been at conventions since. Mary Cheney, the daughter of Vice President Dick Cheney and one of his top aides, watched her father’s 2004 speech from the VIP box with her partner Heather. And there is a corps of LGBT Republican operatives who power the party behind the scenes and fund it with their checkbooks.

Thiel’s moment Thursday night was, in part, an acknowledgement that the party has made its road to the White House more difficult than it needed to be. Four years ago, with a less-conservative platform on marriage, Republicans won just 22% of voters who identified themselves to exit pollsters as gay, lesbian or bisexual. President Obama’s re-election bid carried 76% of them.

Thiel’s speech Thursday night was unlikely to push it to an equal balance, but it might have changed a few minds inside the hall — the very people who insisted on the socially conservative platform positions that Democrats so easily demonize. 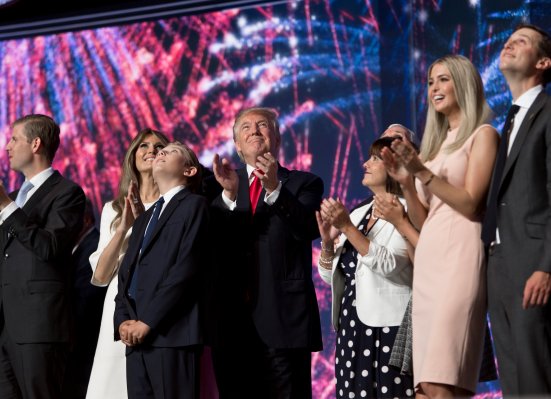