Many Silicon Valley venture capitalists continue to invest on promising new health technology start-ups as Theranos founder Elizabeth Holmes stands trial on charges of defrauding investors and patients. Even in the wake of the infamous scandal, which has sparked massive media coverage, investors say they still operate on a “culture of trust.”

“The Valley is defined by its winners, not its losers,” says Steve Vassallo, a general partner at Foundation Capital. “There are these puffs of smoke around things like Theranos, but extraordinary teams are building the future here. Overall, the culture of trust and wanting to move the world forward is, I think, impossible to kill.”

After attracting a slate of high-profile investors—including Rupert Murdoch, Henry Kissinger, the Walton family and former Education Secretary Betsy DeVos—Theranos came under scrutiny by government officials after the Wall Street Journal published its first investigation into the company’s questionable claims and practices in October 2015. By June 2018, Holmes and her ex-boyfriend, former Theranos President Ramesh “Sunny” Balwani, were indicted on two counts of conspiracy to commit wire fraud and nine counts of wire fraud as media coverage surrounding the scandal ballooned. Theranos’ story has been told in a book, an HBO documentary and a podcast. Despite all this, Silicon Valley investors seem not to have changed their strategies when dealing with new startups.

“I think about it as one of those idiosyncratic moments in the Valley where a few folks got really ahead of where they actually were from a maturity of technology perspective,” Vassallo says. “But I haven’t seen a pattern of that in its wake.”

Theranos claimed for years that it had developed a revolutionary blood-testing machine that could test for hundreds of illnesses using a single drop of blood. With Holmes as its media darling CEO, the company raised more than $700 million and was valued at $9 billion at its peak but suffered a swift collapse when scientists and regulators discovered the technology didn’t work.

It was this alleged purposeful deception that made Theranos’ case such a unique one in the Valley, says Bob Kocher, a partner at Venrock who focuses on health care IT.

“When investors are making early stage investments, there are certain risks they’re worried about,” he tells TIME. “One is, is there demand in the world for the product? Another is, can this person attract really awesome people to create the product? And then the third is, can they actually build the product they’re promising to bring into the world? Investors generally aren’t worried about fraud and lying and [falsified] data. That’s far outside of the realm of typical risks that you encounter with startups.”

After founding Theranos in 2003, Holmes leveraged family connections to raise initial funding from investors Tim Draper, the father of her childhood friend and former neighbor, and Victor Palmieri, one of her father’s long-time friends. By the end of 2004, she had raised nearly $6 million. These investments were based on the promise that Theranos could deliver a fully-functioning “Edison” machine, a device that the company touted as cheaper, more portable way to conduct intravenous blood tests compared with traditional means. Had it worked, it would have been a groundbreaking advancement in medical technology.

Now, Holmes and Balwani are facing criminal charges stemming from allegations that they engaged in a scheme to defraud investors. Opening arguments in Holmes’ trial, which is expected to last 13 weeks, began on Wednesday, while Balwani’s trial is scheduled to start in January. Both have pleaded not guilty.

Even at the height of Theranos’ popularity, the company still found a great deal of skepticism in Silicon Valley. Many top venture capital firms turned down opportunities to finance Holmes’ vision because of the company’s insistence on secrecy; citing intellectual property concerns, Theranos never shared proof that its technology worked or that its results were accurate. In 2016, Vanity Fair reported that when Theranos raised an additional $200 million in 2014 to reach its $9 billion valuation, that money largely came from private equity.

“Theranos is both a creature of Silicon Valley and a very different animal. There’s the Silicon Valley mythos of the brilliant founder that Holmes definitely crafted her image very consciously to play upon,” says Margaret O’Mara, a history professor at the University of Washington who specializes in the history of the technology industry. “But critically, Theranos was not a tech company. And the people who did invest, with a couple of exceptions, were not Silicon Valley investors. The Sand Hill Road venture capitalists mostly passed on Theranos. They looked under the hood and they didn’t see something that was worth investing in.”

When it comes to investing in health tech startups, Vassallo says that the nature of the sector can make it more difficult for investors to fully verify investment opportunities, as opposed to areas like financial or consumer tech.

“In some of the harder tech spaces like health care and bio sciences, it would be impossible for any investor to apply enough due diligence to figure out whether the core science [behind a project], which might have taken a PhD or a team of postdocs literally decades to come up with, [is accurate]. There’s a bit more trust involved,” he says. “We know these CEOs don’t have audited financials when they’re pitching us, but we also don’t think they’re completely fudging them. So if you’re intending to be dishonest or mislead, you can confuse any investor no matter how hard they’re working.”

Still, the shadow of Theranos stretches over some investment circles. These days, hype surrounding new technology typically isn’t enough to get investors on board. With privately-held Theranos treating the technology behind the Edison like a “state secret,” as described in a 2014 New Yorker profile of Holmes, venture capital firms often want to see results before bankrolling a new company.

At the 2017 Innovation Pipeline conference in San Francisco, Gabe Otte, CEO and co-founder of Freenome, another diagnostics company, said that his company hadn’t done a single financing round without having to show data.

“That’s largely been because of Theranos,” he said. “They were able to raise hundreds of millions of dollars without showing data.”

“Since Theranos, there’s been more money going into the biotech and tech-enabled services sectors of health care investing and much less going into the medical devices sector,” he says. “In part, that’s because Theranos led to additional worries over double-checking data. It heightened concerns among investors in that area.”

And while the onset of the COVID-19 pandemic has renewed interest in “next-generation lab testing,” Kocher says that investors are still cautious about claims that might sound too good to be true.

“There’s been a flurry of companies building home-based testing machines to test for COVID,” he says. “But all of those companies have gotten much more scrutiny over their scientific claims and their technology and their data. When people say, I can take a drop of spit from a person and tell you if they have COVID, I think investors have been quite careful to pause and say, ‘Let’s look at the data and figure out if that’s possible. Let’s make sure we’re not just selling a vision.'” 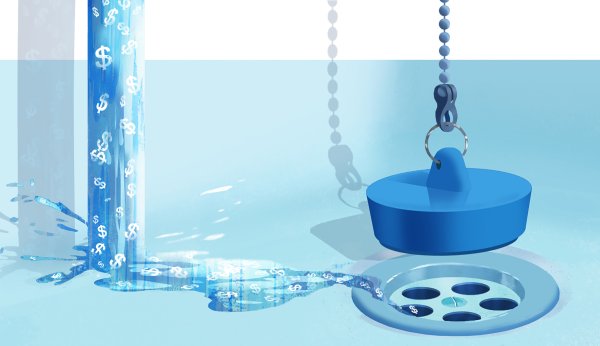 How a New Deal for Global Taxation Might Save Democracy
Next Up: Editor's Pick